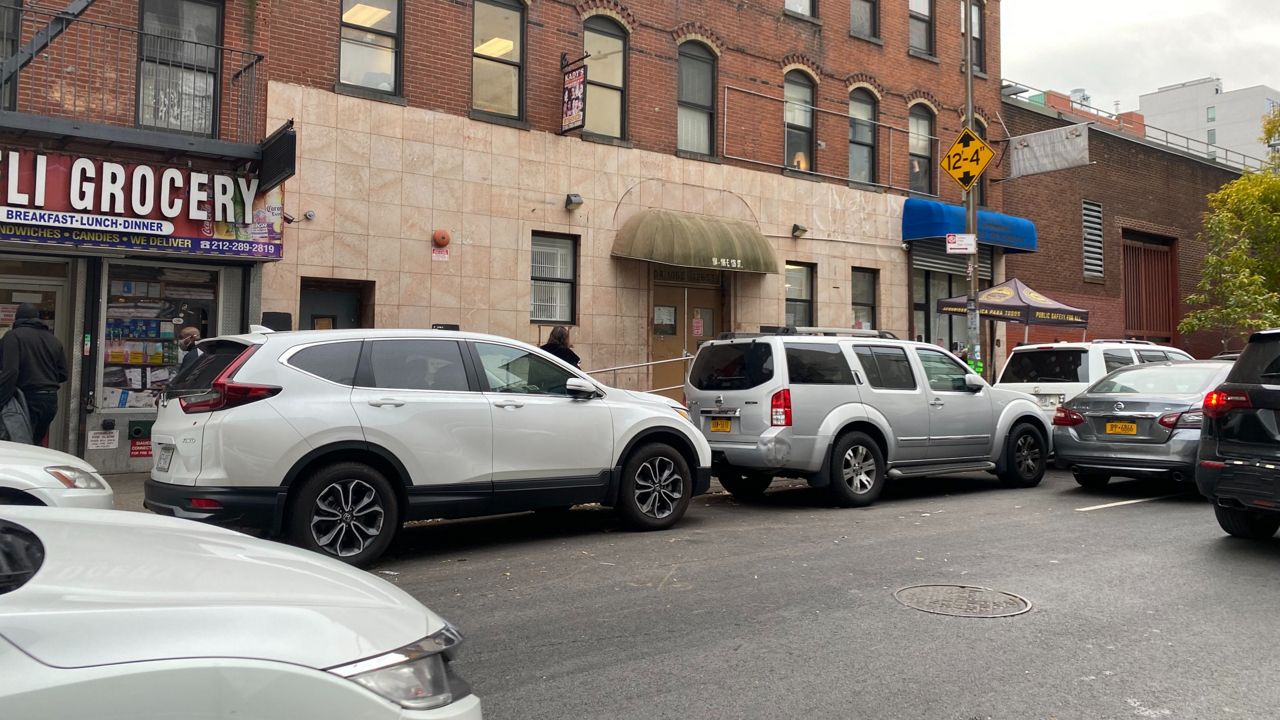 The location of the East Harlem safe drug use site, on East 126th Street between Park and Lexington Avenues. (NY1/ Victoria Manna)

New York City became the first city in the country to allow supervised drug use sites where people can use illegal drugs without threat of arrest, under the watch of trained staff, Mayor Bill de Blasio announced Tuesday.

That day, at least five people overdosed while using drugs under supervision in the two clinics, according to published news reports. A spokesperson for the city's health department declined to confirm the exact number of overdoses. In a news conference Wednesday, de Blasio framed the overdoses, which were reversed and resulted in no deaths, as proof of concept for the sites.

"Five people who could well have overdosed someplace else with, no medical support, and we well know we could have lost one, two or all five of those people," he said.

The initiative comes as overdose deaths have hit historic highs during the pandemic both in New York City and nationally. Between March 2020 and March 2021, about 2,245 people died of overdoses in New York City, a figure 40% higher than the previous 12-month period, according to CDC data.

The centers will have staff on hand to administer naloxone to prevent any overdoses and counsel drug users on addiction treatment. Visitors can be provided with sterile paraphernalia for a range of drugs, including ones that are injected, sniffed and smoked; users must bring their own drugs. De Blasio said that local law enforcement have agreed not to police the sites for illegal drug use.

Public health experts are welcoming the centers as an overdue measure to reduce deaths because of drug use, especially with no end in sight for the pandemic. Yet some residents in the neighborhoods that will host the first safe use sites are concerned that they could increase the already significant populations of drug users in their area.

The safe use sites, however, will ultimately benefit the communities around them, lowering infection rates for diseases like HIV and hepatitis C, said Pedro Mateu-Gelabert, an associate professor at the City University of New York’s School of Public Health.

“People think of needle exchange or harm reduction services as only benefiting people who inject drugs,” Mateu-Gelabert said. “It helps the person who injects drugs, helps the health of the city, and prevents a fatal overdose that would end up in a hospital.”

De Blasio first announced the plan to pilot safe drug use sites in 2018. A report commissioned by his administration found that community leaders would support sites that provided treatment counseling and other social services, and projected that establishing four such sites could prevent 130 overdose deaths and save $7 million in health care costs each year.

Though the pilot program had public support from former Gov. Andrew Cuomo, the state held back in pushing it forward after the federal government under former President Donald Trump continued to prosecute organizations that sought to establish such sites.

The Justice Department sued one Philadelphia nonprofit that was planning to open a safe use site under the so-called “crackhouse statute,” which outlaws providing a location for drug use — a law authored by President Joe Biden when he was a U.S. senator, when he led a push to create a series of laws that enacted harsh penalties for drug use and sale. (In January, an appellate court ultimately ruled against the Philadelphia nonprofit, writing that “though the opioid crisis may call for innovative solutions, local innovations may not break federal law.”)

Biden has since said he regrets some of that legislation. The White House did not immediately respond to a request for comment on whether it will seek legal action against the New York City safe use sites.

New York City’s two sites are being run through a nonprofit organization, OnPoint NYC, that will receive city funding to operate the injection rooms and provide addiction counseling, as well as other services. The organization is a merger of two separate groups that were separately administering the two sites.

They each have slightly different models: The Washington Heights location, where up to six people can use at a time, is run by people with lived drug use experience. The East Harlem location, which has room for up to eight users, has a more traditional, medically trained staff.

The sites will be the focus of an ongoing research project on the differences in approach to running a safe drug use site, Kailin See, OnPoint’s senior director of programs, said Tuesday.

Some conservative politicians have voiced their opposition to the initiative. On Tuesday, Rep. Nicole Malliotakis, who represents Staten Island and a part of southern Brooklyn, sent a letter to U.S. Attorney General Merrick Garland, urging him to stop the sites from operating.

The sites have also been the focus of concern in the northern Manhattan neighborhoods. Some residents have voiced concern that the sites will encourage drug use, or draw new drug users to areas that already have open air drug markets.

See and other proponents of the sites say exactly the opposite will happen: Drug use will more often happen indoors, leading to fewer deaths and less discarded drug paraphernalia on the streets. She noted that, globally, safe drug use sites have seen no drug overdoses, and said that the sites offer both medical services and a range of addiction counseling services.

Dr. Adam Aponte, the chief medical officer of the East Harlem Council for Human Services, said he is welcoming the sites, so long as they provide counseling for drug users and do not open too close to schools or houses of worship.

“It is a little controversial,” Aponte said. “There’s a place for these sorts of sites. We just have to manage them correctly, and destigmatize them, and address falsehoods that this will increase drug use in the area.”

Mateu-Gelabert said he sees the safe use sites as a natural continuation of the city’s long-running needle exchange programs, which have brought down HIV levels among injectable drug users dramatically over the past 30 years, even as opioid drug abuse has grown.

The city has not announced any plans to add additional safe drug use sites, but Mateu-Gelabert said many are needed to match the level of drug use and the risk of overdoses.

“For the city of New York, it couldn't have come a moment too soon,” he said.

Editor's note: This article was updated with additional information about overdoses that occurred at the safe use sites on Tuesday.