Biden, joined by Vice President Kamala Harris and Veterans Affairs Secretary Denis McDonough, said that obligation is a “lifetime commitment” that the U.S. owes to its veterans.

“For me, for [First Lady] Jill [Biden] and for the entire Biden family,” it’s also personal, Biden said, referencing his family’s military background, including his late son, Beau, who served in Iraq. 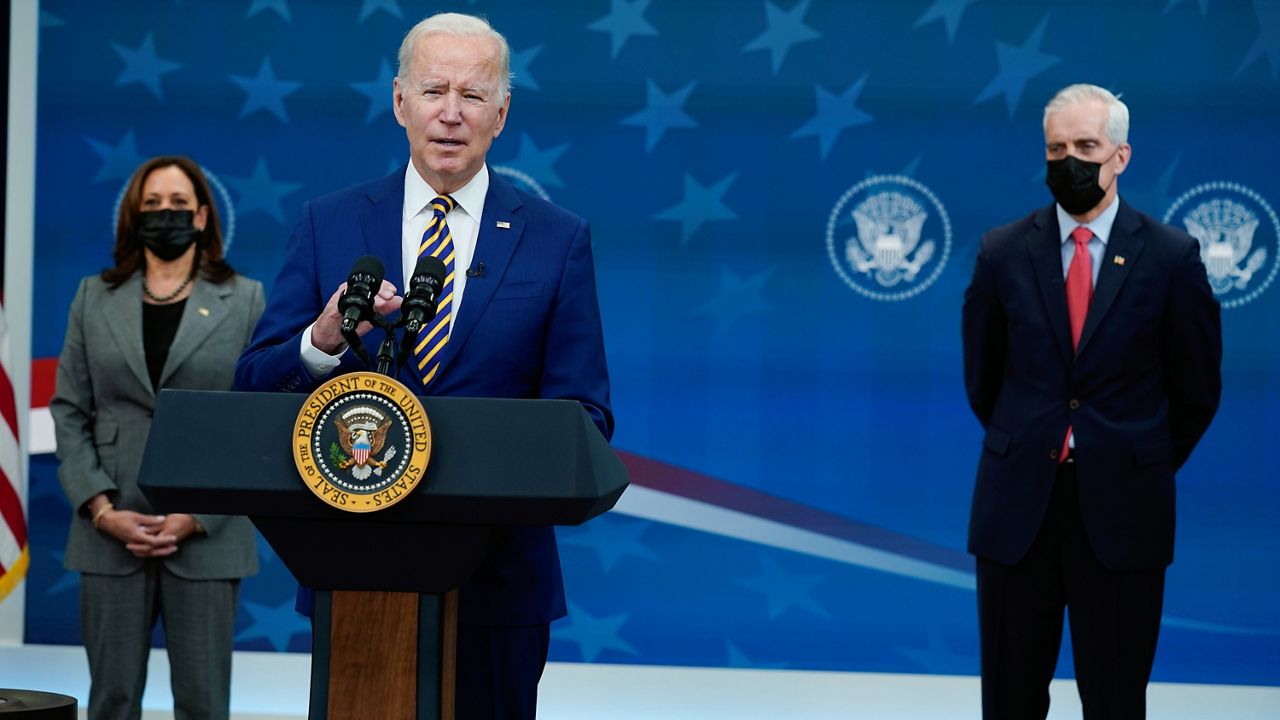 Referencing the ceremony he participated in at Arlington National Cemetery on Veterans Day earlier this month, Biden said that “keeping faith in American veterans requires much more than laying wreaths or making more oaths.”

“It requires acts, such as you’ve done today, all of you,” Biden said to the gathered lawmakers. “That’s why I’m so proud to sign these bills.”

The first bill Biden signed was the S. 1031, a bill ordering the Government Accountability Office (GAO) to study race and ethnicity disparities in compensation benefits administered by Veterans Affairs, disability ratings determined by the VA and the rejection of claims for VA benefits.

The bill, sponsored by Georgia Sen. Raphael Warnock, mandates that the GAO must brief Congress on its results within a year and submit a report on its findings.

“The weapons of war and the nature of injuries they inflict don’t differentiate based on race,” Biden said, nor do the disabilities they carry with them, “so the claims approved and the benefits delivered should not differentiate, either.”

Biden said that the bill will help the U.S. understand how racial disparities have happened and will “allow us to do the necessary work making sure that all of the nation’s veterans — all of them — are treated with equal dignity and equal quality.”

Biden congratulated Sen. Warnock, who was in attendance, on the passage of the bill, praising him as a “moral leader” since his arrival in the Senate.

The president next signed the Hire Veteran Health Heroes Act of 2021 — which was introduced by Sens. Mike Braun, R-Ind., and Maggie Hassan, D-N.H., and Reps. Kathleen Rice, D-N.Y., and Bob Latta, R-Ohio, passed both chambers of Congress unanimously.

It will require the VA and Defense Department to create a program to actively recruit and hire medical personnel after their military service to federal health care roles.

Biden said that the bill is crucial to help alleviate staffing shortages and allow members of the military who are uniquely trained in caring for other service members and veterans, to keep serving their country.

“For our both our veterans and our military medical personnel, service isn’t just what they do, it’s who they are,” Biden said.

“For so many of our service members, their service to us is also about building a better life for themselves and for their families,” Biden said. “And part of keeping our commitment to them means helping survivors get the education they need to fulfill their dreams.”

“This law ensures that surviving spouses and children of veterans, who access the Survivors' and Dependents' Educational Assistance (DEA) program, are eligible for in-state tuition wherever they choose to go to school,” Biden said, regardless of what state they happen to reside in.

Biden also recognized a “very special guest,” Kelly McHugh Stuart, the daughter of Col. McHugh, the bill’s namesake. Col. McHugh was killed in action by a roadside bombing in Afghanistan in May of 2010 during Operation Enduring Freedom.

“Kelly, your dad was an American hero, but he wasn’t the only one in the family who is a hero,” Biden said. “Your work to share your story, to advocate for other surviving families and to turn loss into progress and understanding is heroic as well, and we thank you for it — really, thank you personally.”

Finally, Biden signed the Protecting Moms Who Served Act of 2021, introduced by Illinois Democrat Sen. Tammy Duckworth, Maine GOP Sen. Susan Collins and Democratic Rep. Lauren Underwood of Illinois, passed the Senate unanimously and was agreed to in the House in widely bipartisan fashion, with just 9 members — all Republican — voting against the bill.

The bill, now law, will commission a first-of-its-kind comprehensive study about the country’s maternal health crisis among women veterans, focusing on racial and ethnic disparities, as well as codifying maternity care programs, including requiring the VA to provide community maternity care members with training and support on caring for pregnant and postpartum veterans and resources for mental and behavioral health challenges experienced by women veterans.

“Our country continues to have the highest maternal mortality rates in the developed world,” Biden said, also crediting Vice President Harris for her work on this legislation when she was in the Senate. “Which is hard — especially among Black and Native American women.”

In Fiscal Year 2020, 44% of women veterans in the VA system had a confirmed mental health diagnosis, according to the White House.

“It’s a tragedy every time a mother dies from a preventable cause related to pregnancy or childbirth, and it’s shameful that far too often those moms are women of color whose pain or symptoms have been overlooked or ignored,” Duckworth, a combat veteran and a mother herself, said in a statement after the bill passed. “There has never been a comprehensive evaluation of how our nation’s growing maternal mortality crisis is impacting our women Veterans, even though they may be at higher risk due to their service.”

Biden called the bill an “important step in making sure that we meet the needs of American mothers who have served.”