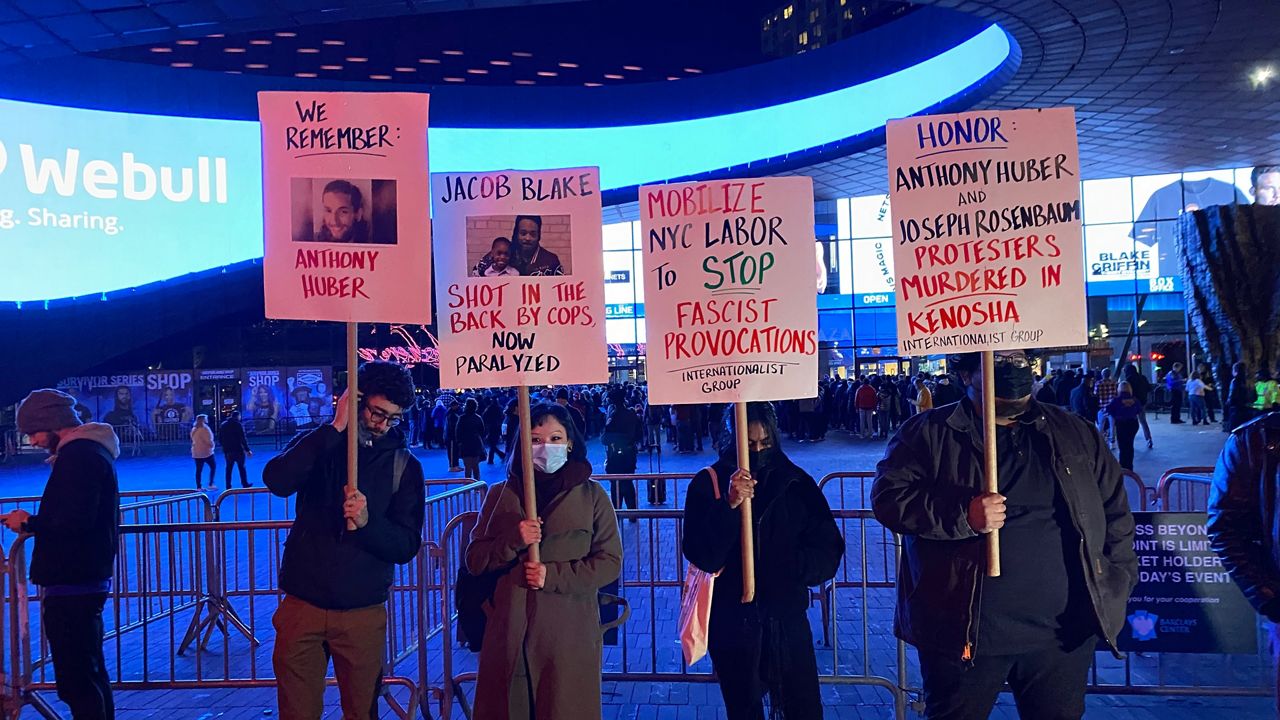 BROOKLYN - A group of protesters rallied Friday evening outside Barclays Center, hours after a 12-person jury found Kyle Rittenhouse not guilty on all five counts after pleading self-defense in the deadly Kenosha shootings in Aug. 2020.

New Yorkers who attended the rally alternated between chanting in protest and listening to speakers call for justice from a megaphone. The Barclays Center remains a common destination for protests after the Black Lives Matter protests of summer 2020.

Elsa Waithe, one person who attended, told NY1 the verdict came as no surprise, though it left Waithe saddened, disheartened and angry.

"What's this going to do tonight?" Waithe said of the protest, "I don't know. I'm here in solidarity in sadness, in anger, to share with my people because we already saw this coming. We knew this was coming. We can't depend on justice in a stolen land. It's not going to happen."

"All I have to say is, imagine if that was a Black teenager," Waithe added. "We would not allow for that in this country, right?"

"Hurt. I wasn’t shocked," Nicole Sellers said about the verdict while standing outside the Barclays Center. "It’s almost like it’s becoming mundane to be surprised about white privilege, and it’s evident when someone pre-meditates and sacrifices children, and gets acquitted, what other reason is it? It’s the color of his skin protects him."

"I'm here in solidarity, in sadness, and in anger, to share with my people because we already saw this coming" — Elsa Waithe, who attended the protest outside the #BarclaysCenter, told @StefManisero. #NY1at10 https://t.co/xaIlhmE7FM pic.twitter.com/vftwcSNPhD

Rittenhouse’s lawyers built his case on self-defense and said he was trying to stop lawlessness.

"He wishes none of this would’ve ever happened," Rittenhouse lawyer Mark Richards said in Wisconsin after the verdict. "But as he said when he testified, he did not start this.”

Mayor Bill de Blasio tweeted earlier Friday about the case, calling the verdict "disgusting" and adding, "To call this a miscarriage of justice is an understatement."

Anthony Huber and Joseph Rosenbaum are victims. They should be alive today.

The only reason they’re not is because a violent, dangerous man chose to take a gun across state lines and start shooting people.

To call this a miscarriage of justice is an understatement. https://t.co/TwaI2ghgM5

Gov. Kathy Hochul also weighed in on the verdict, arguing the outcome revealed the necessity of more stringent gun laws in the United States.

Kyle Rittenhouse used an assault weapon to kill two people. This is not justice.

If there was any question about why we need strong gun safety laws, this is your answer. This should never have been allowed to happen in the first place.

We have a lot of work to do.

"We need gun laws and we need gun legislation across every state," Sellers said.

Some say change is possible but needs to come from within.

Others were left disheartened.

"I know this is not going to change nothing," Waithe said. "We almost tore the whole entire country apart last year, and here we are a year later."

Shortly after 8 p.m., the protesters dispersed from Barclays Center, marching toward the Brooklyn Bridge.