President Joe Biden pardons Peanut Butter, the national Thanksgiving turkey, during a ceremony in the Rose Garden of the White House in Washington, Friday, Nov. 19, 2021. Biden is joined by, from left, Phil Seger, Chairman of the National Turkey Federation, and Andrea Welp, turkey grower from Indiana. (AP Photo/Susan Walsh)

President Joe Biden on Friday afternoon saved two turkeys from this year’s Thanksgiving dinner table by pardoning a pair of birds named Peanut Butter and Jelly, who were selected as the national Thanksgiving turkeys for the 2021 holiday.

The two turkeys will now spend the rest of their days at Purdue University in Indiana, the state where they were raised.

“Eventually, Peanut Butter and Jelly were selected based on their temperament, appearance, and — I suspect — vaccination status,” President Biden joked on Friday afternoon in the White House Rose Garden.

“Instead of getting basted, these two turkeys are getting boosted,” he added. 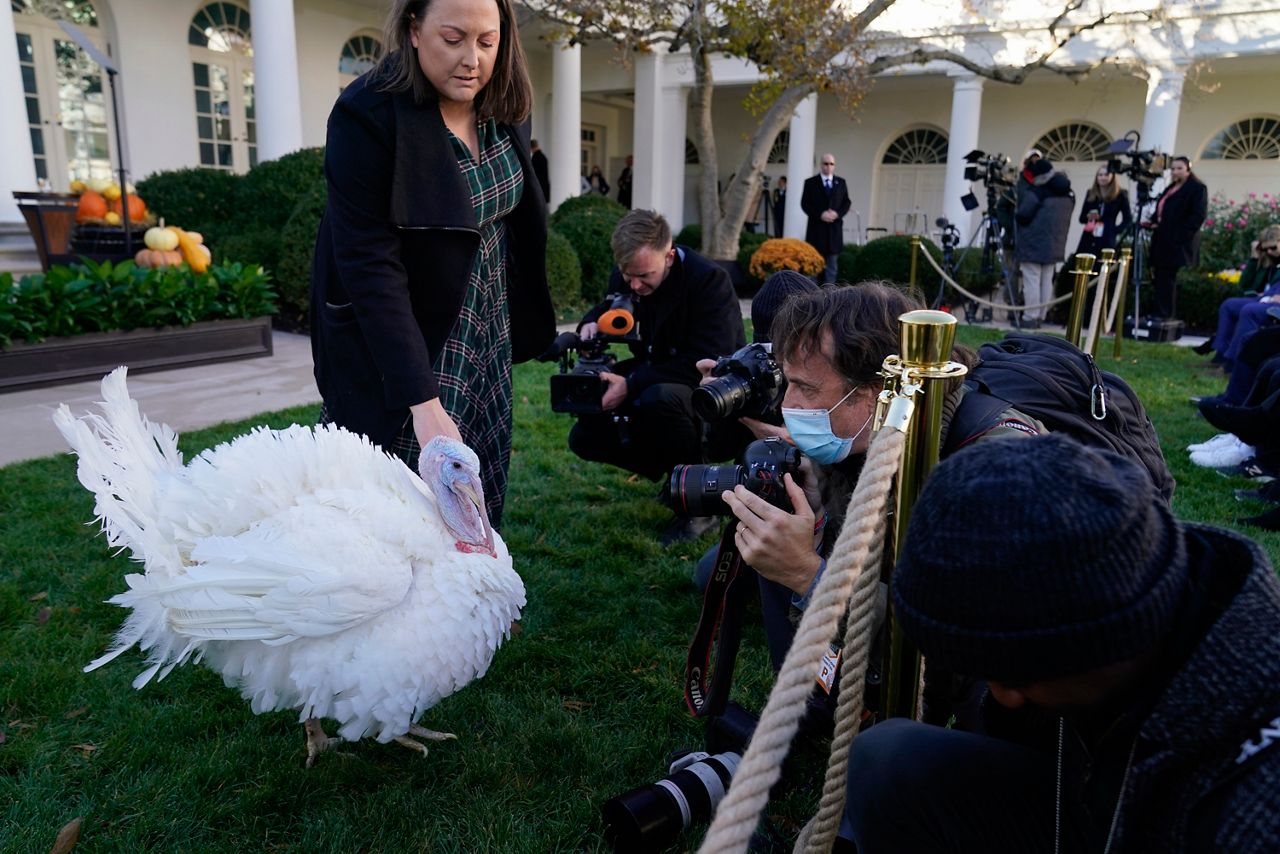 Members of the media photograph one of the two national Thanksgiving turkeys in the Rose Garden of the White House before a pardon ceremony in Washington, Friday, Nov. 19, 2021. (AP Photo/Susan Walsh)

The tradition of the presidential turkey pardon was formalized by George H.W. Bush 1989 when he excused the bird he was presented by the National Turkey Federation. The presentation of a live turkey to the president began in 1947 with President Harry Truman.

The White House names the turkeys after they are selected from the Presidential Flock. Peanut Butter was chosen as the National Thanksgiving Turkey and Jelly as its alternate, though Biden pardoned both on Friday.

“I have to admit to you — my wife doesn’t like me to admit it — that's what I like for lunch. Peanut butter and jelly,” the president said.

The birds traditionally stay overnight in the Willard InterContinental hotel once they reach Washington, D.C., which is next to the White House.

“With the power vested in me as President of the United States, I pardon you,” he said, laying his hand on the turkey.

“Go on, say something,” he added, to which Peanut Butter gobbled loudly in response.

"With the power vested in me as President of the United States, I pardon you. Go on, say something."

The families of White House staff were in the audience Friday.

“It's important to continue traditions like this to remind us how from darkness, there's light and hope and progress. And that's what this year's Thanksgiving, in my view, represents,” Biden said. “So many of us will be gathered with our loved ones for the first time in a long time.”

The president also cracked Washington-esque jokes, making puns with the name of his domestic agenda.

“Turkey is infrastructure,” he teased. “Peanut Butter and Jelly are going to help Build Back the Butterball as we move along.”

And another came at the light expense of his own transportation secretary, Pete Buttigieg, who is also from Indiana: “I’m sorry for Pete and Chasten. Peanut Butter and Jelly are now the new Indiana power couple.”

The president will spend the weekend at his home in Wilmington, Del. On Monday, he and the first lady will travel to Fort Bragg in North Carolina to visit troops for the Thanksgiving holiday.

While they won’t be eaten next week, Peanut Butter and Jelly are unlikely to live another year at Purdue, since the skeletons and organs of turkeys raised as food aren’t able to support their weight and they often die within a year, according to the National Wildlife Federation.