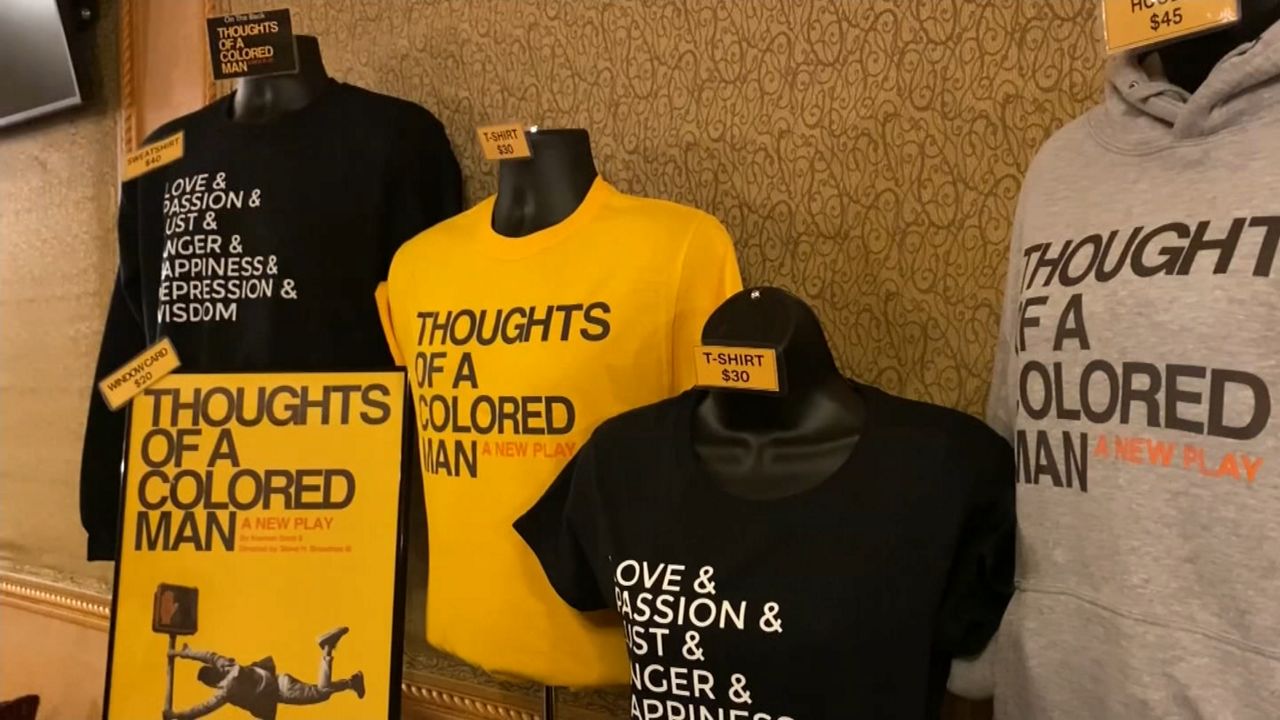 NEW YORK — Brooklyn McLain and Brandon Gloster worked behind different merchandise booths for several years before they launched their own company, called "merch."

"If you've been to a Broadway show in the past decade, you've probably purchased merchandise from me at least once," merch. COO Brooklyn McLain said. "Same. Same," CEO Brandon Gloster added.

In launching merch., Gloster and McLain became the co-owners of the first Black-owned theater merchandising business in the Broadway community. They are making their debut at "Thoughts of a Colored Man," which is currently playing at the John Golden Theatre on Broadway.

"We were having these important conversations about inclusion and diversity on Broadway, but behind the merch booth, that conversation wasn't happening," McLain said. "Working with this production has been so cool for me because it's one of the first shows that I've ever worked on at any level where I saw so many people who look like me on so many different levels."

"It seemed to fit so perfectly with what we were trying to do, because it's a new play trying to do new things in an old space," Gloster added. "And that's basically what we are."

The two "wanted to address a lot of things that we saw for years just being excluded from merchandise, and that's like inclusive-izing," McLain explained.

It was also important for them to make sure the price points "weren't crazy," according to McLain.

"Going into this, I always said I want to be an advocate for the kids in the student rush seats, so I want to make sure that everybody can afford to take something home that is not just a magnet," McLain said. "When we started designs, especially for 'Thoughts of a Colored Man,' we really wanted to think about culturally relevant items; things that you would see onstage because this is a culture that is being presented to the Broadway audience."

"The durag and the brush also helps educate the audience coming to see the show on not only what they're seeing, but also the cultural relevance of, lets say a durag," Gloster added. "So something that we're putting into the box with the durag is a little business card that links to a page on the website that basically has a brief history of what a durag is, and what it started as, and what it currently is culture-wise with celebrity influence and stuff like that. So just trying to help educate and help maintain what it is that we're trying to do, while selling really cool things."

"I hope the door is open, and that there are more people coming right behind me," McLain said. "From bar staff to the 11 o'clock number, there's somewhere in between those two where you belong."

"Yeah, because this is New York. This is the greatest city in the world because of its diversity," Gloster added. "So if we're able to kind of help bring a new generation of not only theatergoers but theater workers as well, let's do that."