New York City’s economic recovery index broke its record-setting streak, falling just over six points to a score of 79 as of Oct. 30, after three straight weeks of fresh highs above 80. Setbacks in the city’s home sales, unemployment claims, and restaurant reservations were primarily responsible for the decline.

To help the tourism industry, New York Governor Kathy Hochul announced a $450 million spending package on Monday called "Bring Back Tourism, Bring Back Jobs." The package includes one-time grants for laid-off workers and their employers, who were some of the hardest hit during the pandemic. The state would issue one-time payments of $2,750 to tourism industry workers who lost their jobs because of the pandemic, and provide $5,000 grants to tourism companies to rehire workers and employ them for at least six months. 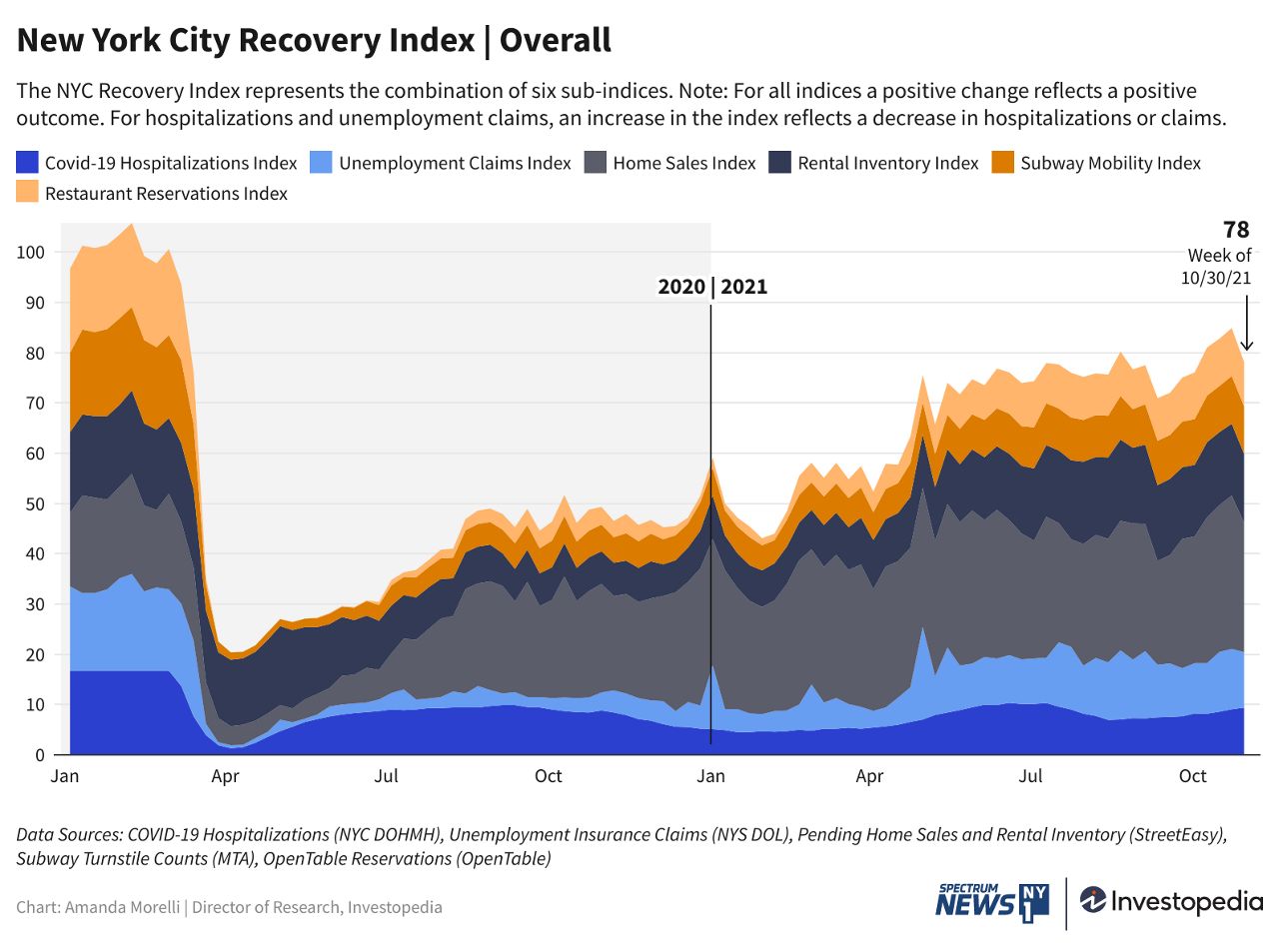 New York City’s recovery stands at a score of 79 out of 100, according to the New York City Recovery Index, a joint project between Investopedia and NY1. Over a year and a half into the pandemic, NYC’s economic recovery is a little under four-fifths of the way back to early March 2020 levels. 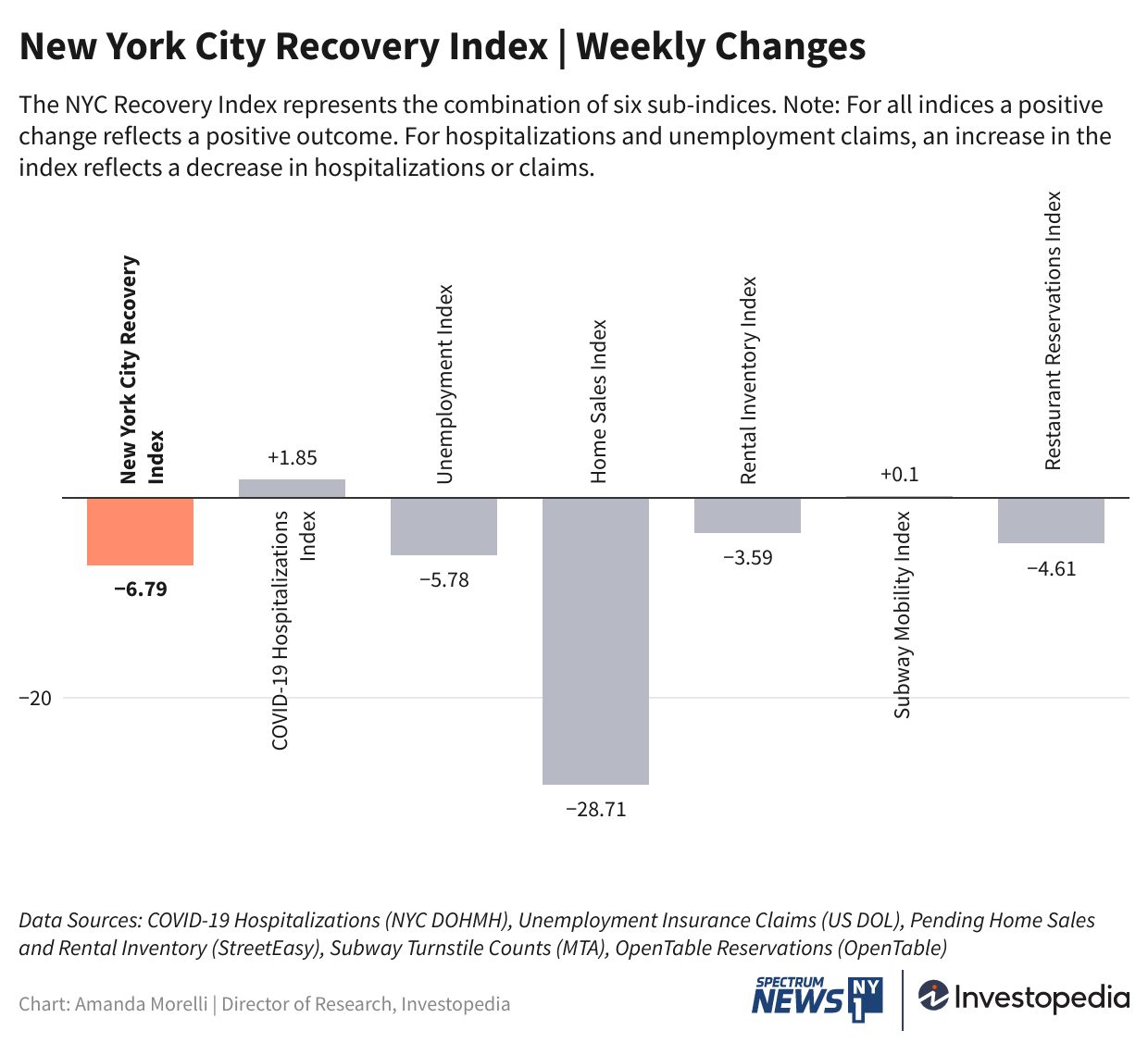 The CDC continues to project that roughly 99.1% of new cases in the New York region (along with New Jersey, Puerto Rico, and the U.S. Virgin Islands) are linked to the delta variant. A total of 1,129,147 cases and 34,634 deaths were recorded in New York City as of Nov. 9.1

As of Nov. 8, New York State has fully vaccinated approximately 67.76% of its broader population and is on pace to fully vaccinate 70% by late January of next year. In a national ranking of state vaccination efforts, New York State came in 8th out of 50 states, districts, and territories, according to CDC data and analysis by Verywell.

The city’s rate of unemployment claims experienced some setbacks as of Oct. 30, as claims rose 12 percentage points to an estimated 50% above pre-pandemic levels. After several weeks of steady progress, the relapse represents the first increase in five weeks, and could signal renewed volatility in the measure. With a surge in seasonal hiring for the holidays anticipated soon, seasonal work could impact claims in the coming weeks.

The number of pending home sales in New York City tumbled by 34 homes as of Oct. 30 compared to a jump over the same period in 2019, which dragged the city’s home sales index down by 29 points. However, sales in the city are still over 54% above pre-pandemic levels, with 645 homes pending sales over the week compared to 418 in 2019. By borough, sales in Manhattan are up 56.5% compared to pre-pandemic levels, while sales figures in Queens are up 80% and Brooklyn is up 35.7%.

A decrease of 919 available residences weighed on New York City’s rental market, causing the index to fall three points to a score of 82 due to lack of units. There were a total of 14,655 residences on the market compared to 15,574 the week before. Though its score continues to hover in the low 80s, the rental market continues to be one of the best-performing measures in the index, and has effectively recovered from the COVID-19 pandemic.

Subway ridership made some slight progress as of Oct. 30, but not enough to move its score, and remains near 43% below pre-pandemic levels. The measure has yet to break free of its sustained lull near the 50% mark, where it has lingered over several months. The Metropolitan Transportation Authority (MTA) estimated a trailing seven-day average of close to 2.8 million riders on public transport.

The city’s restaurant reservation index reversed course to fall nearly five points, to 47.28% below 2019 levels as of Oct. 30, according to OpenTable estimates. The rise brought the rate back to where it was several weeks ago after edging closer to 40%. Like subway ridership, restaurant reservations have lingered close to the 50% mark for several months, with few signs of breaking the trend. Though the city continues to support outdoor dining, a renewed ban on propane heaters to warm outdoor dining spaces could prevent reservations from rising while COVID-19 related restrictions remain in effect.