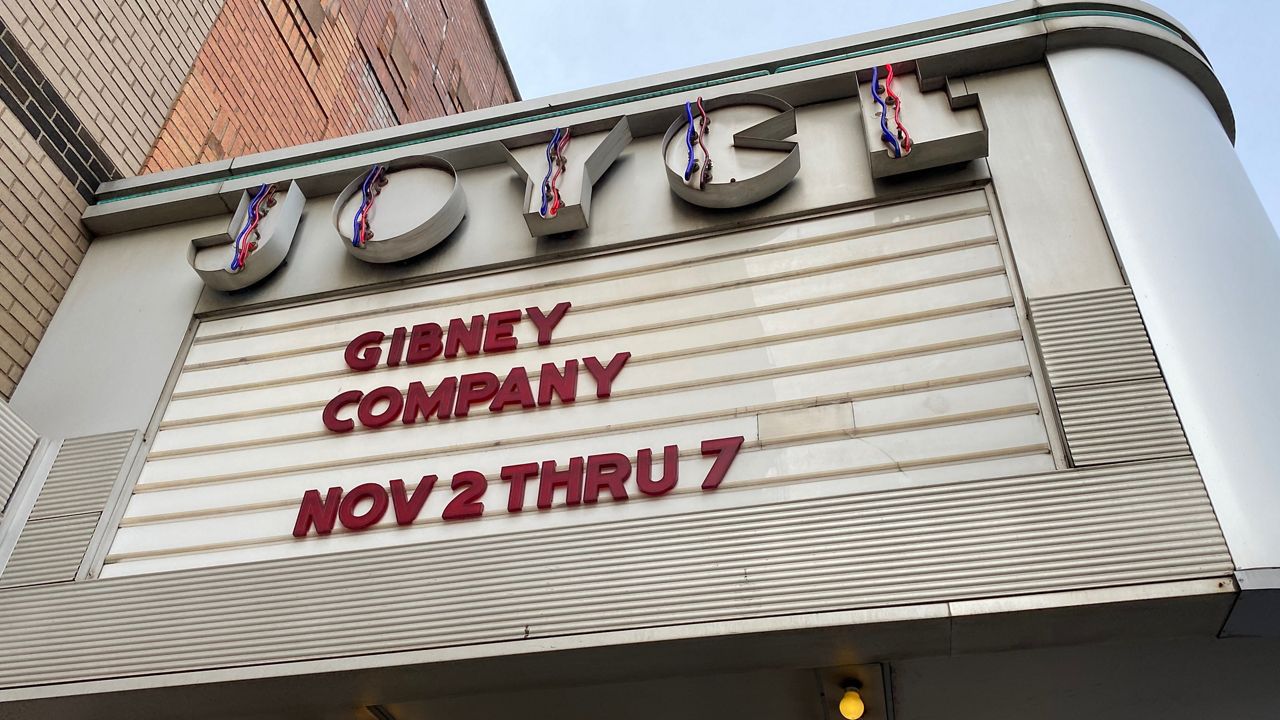 Signage for the Gibney Company, performing at the Joyce Theater in Chelsea.

Jesse Obremski and Jei-Hung Connie Shiau are two of the 12 dancers with Gibney Company performing for a short stint this week at the Joyce Theater in Chelsea. For Obremski, who’s in his second year at the company, it feels great to be out of the virtual Zoom box and on center stage again.

“There’s nothing that can replace live theater and to be in this space with others is just unimaginable and immeasurable,” said Obremski, who’s been dancing since the age of seven.

It’s Gibney’s season debut performance after receiving a $2 million gift from philanthropist Andrew Davis and revamping it’s contemporary dance company. For 30 years, the dance troupe has merged the arts and encouraged social justice initiatives. Obremski says the pandemic and events of the past two years have inspired his social justice causes.

“Everything that’s been going on within 2020, especially Black Lives Matter, to 2021 with AAPI hate crimes and to really share that we can see each other and see our world through a lens of empathy,” Obremski said.

Empathy is something he says dancers routinely take into consideration when performing. He says it’s a trait that’s sometimes goes missing in the day to day of the world, but is expressed fully in theater.

“There’s a beautiful relationship between the audience and the stage and there’s an empathy there because of transparency and the audience receiving that,” Obremski said.

You can see it in the connection Obremski and Shiau have in their onstage duet during on the pieces.

“Connie, who’s my partner artistically and personally, really allows for our relationship and it’s intentions to be real and to be honest,” he said.

For Connie Shiau, in her first year with the company, she decided to use the platform to tackle the body shaming that she says she was a victim of.

“There’s a shape, and there’s a look, and even a color that a successful Asian woman, a successful female dancer should look like. I would like to break that,” Shiau said.

Night after night she and others are doing just that, using their art and social justice voice to bring awareness and acceptance.

“It’s been a lil emotional, but in the best way and being able to really pour that into these three pieces and now sharing it with audiences is very rewarding,” Shiau added.