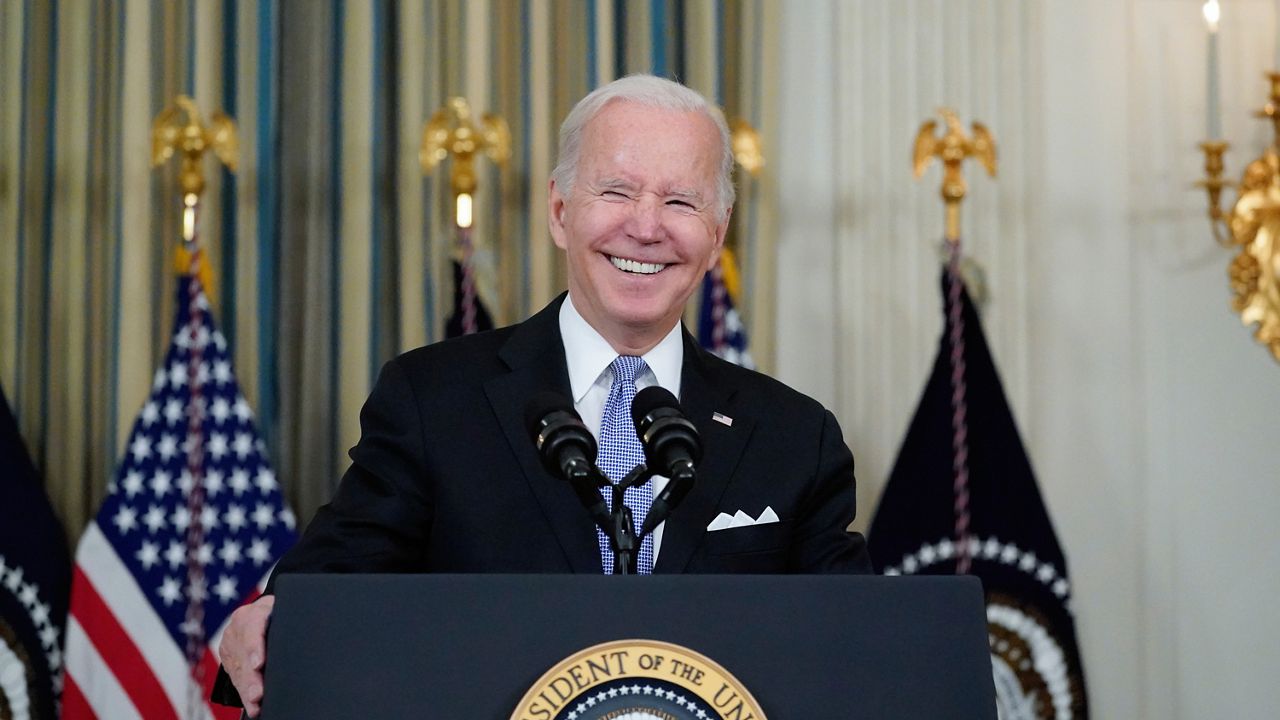 After months of negotiations, the House voted to pass the $1 trillion Bipartisan Infrastructure Bill, sending the measure to President Joe Biden’s desk — a major win for the Democratic president.

At the end of a chaotic day on Capitol Hill, Democrats in the House came to an agreement — brokered by the president and other top party leaders — on the passage of the two parts of President Biden’s economic agenda.

President Joe Biden praised the bill’s passage Saturday as a “monumental” step forward for the nation.

“I don’t think it’s an exaggeration to suggest that we took a monumental step forward as a nation,” he said. “We did something long overdue, that has long been talked about in Washington — but never actually done.”

Biden hailed the passage of the bill as a “once-in-a-generation” investment that will create jobs, improve public works, and help restore America’s competitive edge.

This bill is “for all of you at home, who feel left behind and forgotten,” Biden said Saturday. “There will be jobs in every part of the country: Red states, blue states, cities, small towns, rural communities, tribal communities.”

“This is a blue collar blueprint to rebuild America, and it's long overdue," he said, noting that "the vast majority of the thousands of jobs created don't require a college degree."

The bill’s passage was a much-needed victory for Biden and Democrats, amid a recent string of relatively low approval polls for the president and the party’s losses in some of Tuesday’s off-cycle elections.

On Saturday, the president appeared upbeat and hopeful — reflecting on his own time in the Senate as he praised lawmakers for their weeks of negotiation on his spending bills.

“There’s an awful lot more to say about this," Biden said as he concluded his remarks, "but today ... today has just been a good day.”

Biden pledged to sign the bill "soon," planning to host the lawmakers of both parties who made the bill possible for a signing ceremony.

"Vice President Harris and I look forward to having a formal signing ceremony for this bipartisan infrastructure soon," Biden said. "I'm not doing it this weekend because I want people who work so hard, Democrats and Republicans, to be here."

All told, the bill will provide, according to the White House:

"Tonight, we took a monumental step forward as a nation," Biden wrote in a statement issued after the vote. "The United States House of Representatives passed the Infrastructure Investment and Jobs Act, a once-in-generation bipartisan infrastructure bill that will create millions of jobs, turn the climate crisis into an opportunity, and put us on a path to win the economic competition for the 21st Century."

"It will create good-paying jobs that can’t be outsourced. Jobs that will transform our transportation system with the most significant investments in passenger and freight rail, roads, bridges, ports, airports, and public transit in generations," Biden continued. "This will make it easier for companies to get goods to market more quickly and reduce supply chain bottlenecks now and for decades to come. This will ease inflationary pressures and lower costs for working families." 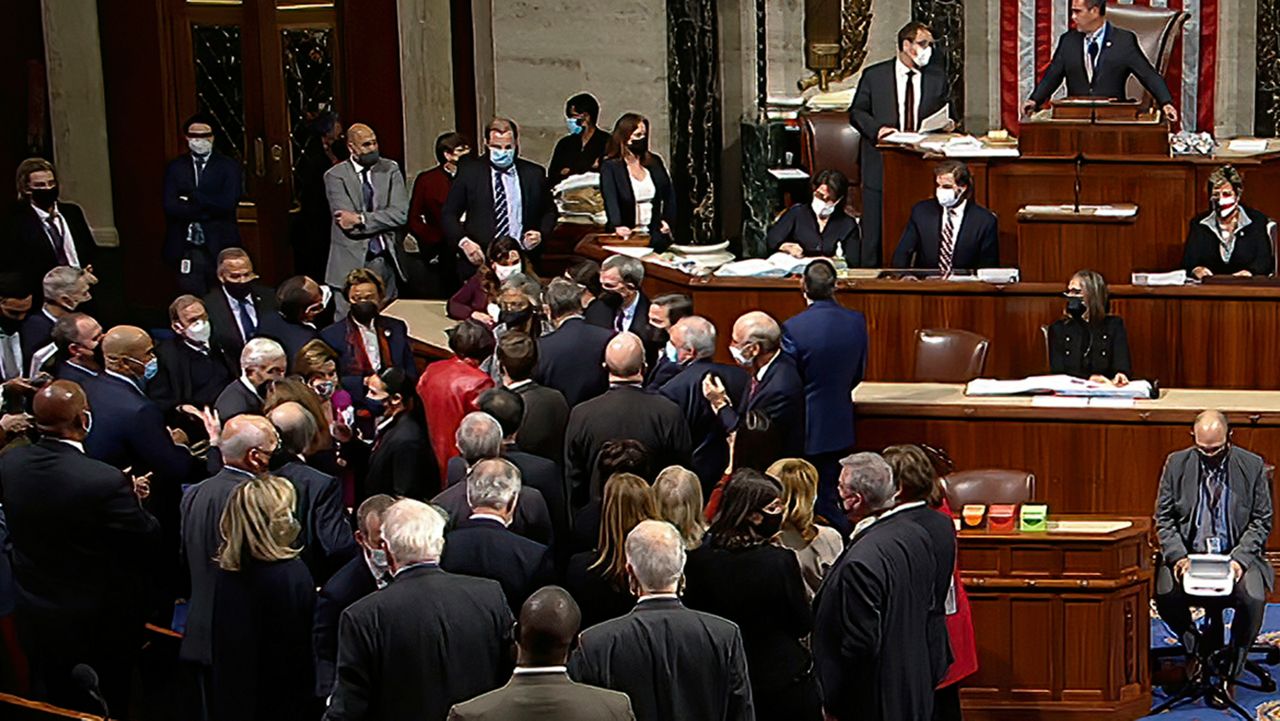 In this image from House Television, House Speaker Nancy Pelosi of Calif., joins other Democratic members on the House floor late Friday, Nov. 5, 2021, in Washington, as the House approves a $1 trillion package of road and other infrastructure projects after Democrats resolved a months-long standoff between progressives and moderates, notching a victory that President Joe Biden and his party had become increasingly anxious to claim. (House Television via AP)

The House passed the bill 228-206, with 13 Republicans supporting the bill – and six progressive Democrats voting against it.

Tonight, I proudly signed the historic Bipartisan Infrastructure Framework and sent it to @POTUS to be signed into law. This bill delivers a once-in-a-century investment in our infrastructure, creates good-paying jobs and takes a crucial step to #BuildBackBetter For The People. pic.twitter.com/atJPzRVclu

"From the beginning, I have been clear that I would not be able to support the infrastructure bill without a vote on the Build Back Better Act," Rep. Omar wrote in a press release. "Passing the infrastructure bill without passing the Build Back Better Act first risks leaving behind childcare, paid leave, health care, climate action, housing, education, and a roadmap to citizenship."

You can view the full statement here: https://t.co/l80rK56DgD

"My community cannot wait any longer for these much-needed investments that will be delivered through the Build Back Better Act," she continued. "I cannot in good conscience support the infrastructure bill without voting on the President’s transformative agenda first. And for those reasons, I voted NO on the infrastructure package."

"For far too long our leaders have failed to modernize our aging roads, highways & bridges, upgrade sewer systems & implement flood resiliency projects.," Malliotakis wrote about her vote on the infrastructure bill.

I cast my vote FOR the bipartisan infrastructure bill and AGAINST advancing the socialist spending spree. For far too long our leaders have failed to modernize our aging roads, highways & bridges, upgrade sewer systems & implement flood resiliency projects https://t.co/1xT5Ag4AUz

Progressives agreed to pass the smaller bill Friday night, while moderates pledged to back the larger $1.85 trillion Build Back Better bill later this month, provided official estimates of the cost via the Congressional Budget Office are in line with expectations.

"We commit to voting for the Build Back Better Act, in its current form other than technical changes, as expeditiously as we receive fiscal information from the Congressional Budget Office – but in no event later than the week of November 15th," the group of five moderates wrote.

Asked Saturday about the future of his Build Back Better legislation, Biden told reporters, "Let me be clear: We will pass this in the House. And we will pass it in the Senate."

Biden declined to say whether moderate Democrats had given him any assurances that they plan to approve the spending package, saying only, "I'm not going to answer that question … but I feel confident we will have enough votes."

The bipartisan bill will be funded largely by repurposing other money, including unused COVID-19 relief funds, as well as other revenue streams and spending cuts. An analysis from the Congressional Budget Office projected that it could add $256 billion to projected deficits over the next decade.

The House also voted late, along party lines (221-213) on a rule to end debate on the 10 year, allowing for a vote on President Biden's $1.85 trillion Build Back Better act the week of Nov. 15. The bill would boost health and family programs and devote $550 billion to climate initiatives, the largest legislative investment to combat the climate crisis in history.

"I’m also proud that a rule was voted on that will allow for passage of my Build Back Better Act in the House of Representatives the week of November 15th," Biden wrote in his statement.

"The Build Back Better Act will be a once-in-a-generation investment in our people," he continued. "It will lower bills for healthcare, child care, elder care, prescription drugs, and preschool. And middle-class families get a tax cut."

"This bill is also fiscally responsible, fully paid for, and doesn’t raise the deficit. It does so by making sure the wealthiest Americans and biggest corporations begin to pay their fair share and doesn’t raise taxes a single cent on anyone making less than $400,000 per year."

"Generations from now, people will look back and know this is when America won the economic competition for the 21st Century," Biden said.