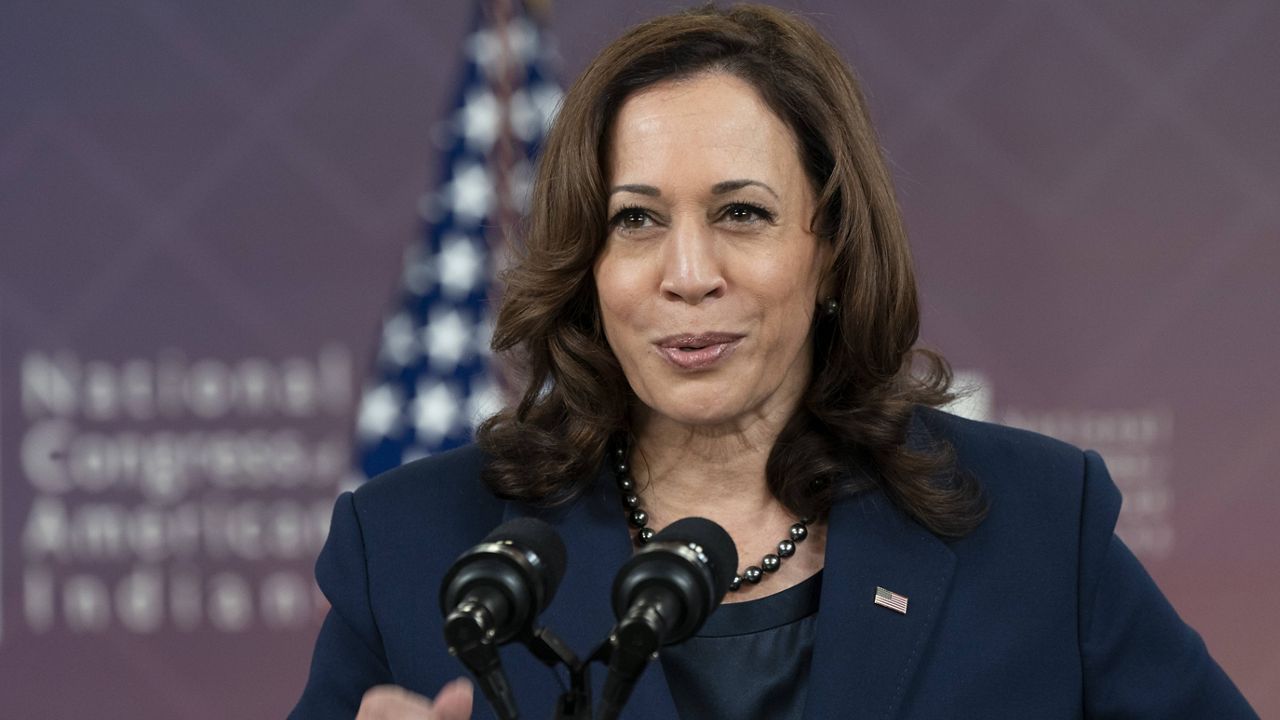 With President Joe Biden abroad making the case for urgent action to combat the climate crisis at the COP26 conference in Glasgow, Scotland, Vice President Kamala Harris took a trip to New York on Monday to announce key climate initiatives at home.

Calling climate change a "global crisis," Harris said that in order to meet the United States' climate commitment, "we must – we must, I say to my fellow Americans – put in the work here at home."

During the visit, Harris touted the clean energy initiatives in the two prongs of President Joe Biden's legislative agenda: The Senate-passed Bipartisan Infrastructure Deal and the recently unveiled Build Back Better framework, which contains about $550 billion in spending to combat climate change.

Harris said that the framework "is the largest effort to combat climate change in our nation's history."

"We will reduce emissions by investing in electric vehicles, clean energy and clean manufacturing," she said. "We will invest in the communities that have been hit the hardest by the impact of climate change. And at the same time, we will create millions of good union jobs."

"These are the opportunities we have within our grasp right now," she said, adding: "The president and I are confident that we have a framework that will pass."

"Climate change, well, it's not slowing down, and neither can we," she said. "We must deliver for the American people."

Turning her attention to the new announcements made by the Department of Energy, Harris first said that the new heat pumps "will not only cut down on emissions," but will also "help families save on their monthly energy bills."

We need to be able to move goods without harming our communities. We're working to invest $127 million to speed up the deployment of large zero emission trucks. This investment is an investment in environmental justice and our people–and will create jobs.https://t.co/aNAC7fmihK

"It creates an opportunity to create jobs in the community and to grow the skills of the young people in our communities to participate in doing this work," she added.

Harris recounted a story about a lawsuit she joined as California's attorney general in Mira Loma, Calif., which was impacted by diesel exhaust due to a high volume of semi-truck traffic in the community. Harris cited study conducted by the University of Southern California which linked the area's air pollution to stunted lung development in the area's children.

"We should be able to move our goods, to move commerce, without harming the children of our communities," Harris continued. "And that is why an investment in large electric trucks is an investment in environmental justice."

"The world is looking at us, and they are looking to us," Harris said, adding: "Here is the bottom line: To demonstrate that the United States is leading by example, we must continue to put in the work here at home."

"So let's build on the incredible work being done in places like New York," she concluded. "Let us pass Build Back Better framework, let us pass ... the bipartisan infrastructure deal, and let us show the world how America intends to lead."

We know that if we're to meet our climate commitments, we must put in the work. I’m in New York with @SecGranholm to discuss how our Build Back Better Framework and Bipartisan Infrastruture Deal will create millions of jobs and improve communities as we tackle the climate crisis.

Harris and Granholm were briefed on New York's investment in electric vehicles, as well as the city's fleet of zero emission trucks.

The @VP and @SecGranholm receive a briefing with on NYC’s fleet of Zero-Emission SuperTrucks and the city’s investments in electric commercial vehicles pic.twitter.com/8d07byXw94

The VP and the Energy Secretary were joined by New York Sen. Kirsten Gillibrand and Rep. Gregory Meeks, the chair of the House Foreign Affairs Committee.

Thanks to $127 million in new funding, we can fight the climate crisis AND create good jobs by investing in clean energy tech like electric trucks! Thanks to @VP and @SecGranholm for joining me and @RepGregoryMeeks in New York to share how we can #BuildBackBetter! pic.twitter.com/d4TCDMQKA5

"We’re committed to creating good-paying union jobs to build a healthier and cleaner future in New York," Granholm wrote on Twitter, adding that

@VP, @SenGillibrand, @RepGregoryMeeks and I met with #CleanEnergy leaders at @NYSERDA.

We’re committed to creating good-paying union jobs to build a healthier and cleaner future in New York.@POTUS’ #BuildBackBetter Framework will help do this in EVERY pocket of America! pic.twitter.com/WgNfvf6vwC

The trip to New York comes as the Biden administration is working to prove that it can meet the United States' ambitious climate goals.

"One year ago, in November 2020, President Biden was elected with more votes than anyone in U.S. history," National Climate Advisor Gina McCarthy said on a call with reporters previewing the first day of the COP26 climate conference. "And he ran on a platform of taking bold climate action and growing a clean energy economy and advancing environmental justice. And he came into office knowing that he has a mandate, as the U.S. President, and a responsibility as well, as a world leader, to tackle this climate crisis head on."

McCarthy called the Build Back Better framework "the largest investment to combat the climate crisis in American history," adding that "it’s going to let us reduce emissions well over a gigaton — that’s 1 billion metric tons — in 2030."

"As the President said: It’s a darn big deal," she said. "And I agree with him, only I would say: It’s a damn big deal."

McCarthy said that the two bills will put the U.S. "on a decisive path to achieve our climate goals of reducing emissions 50 to 52 percent by 2030 and achieving a net-zero economy by 2050."

The vice president last visited the Empire State about two weeks ago, where she touted President Biden's economic agenda at a YMCA in the Bronx.