A sign in the window of the campaign offices for Republican Inna Vernikov notes that her opponent, Democrat Steven Saperstein, has declined requests for a debate. (NY1/Ari Ephraim Feldman)

Welcome to the 48th City Council district, in Brooklyn’s southeast corner, where the two central constituencies — Russians who love former President Donald Trump and moderate Orthodox Jews — cast their vote outside the sphere of party loyalty that influences so much of the city’s politics. A year after electing a Democrat to the council, the area voted overwhelmingly for Trump.

That dynamic has made this one of a handful of genuinely competitive races going into the general election.

Inna Vernikov, the pro-Trump Republican, has two respected former political leaders in her corner and an outsize social media presence driven by selfie videos in her Mercedes coupe.

“Even though you may have an actual majority of registered Democrats, it’s in name only, for the most part,” said Jeff Leb, a political consultant and the treasurer of Common Sense NYC, a Super PAC funded largely by billionaire real estate mogul Stephen Ross that Leb said may spend up to $100,000 to support Saperstein before the race is over, mostly with mailers. “I think it’s gonna be a very close race.”

As with their shared lack of concern for party loyalty, observers of the race feel that there is little to separate the two candidates on policies. When asked to describe how her views differ from Saperstein’s, Vernikov said she couldn’t.

“I could answer your question if I actually knew what my opponent's policies are,” she said. 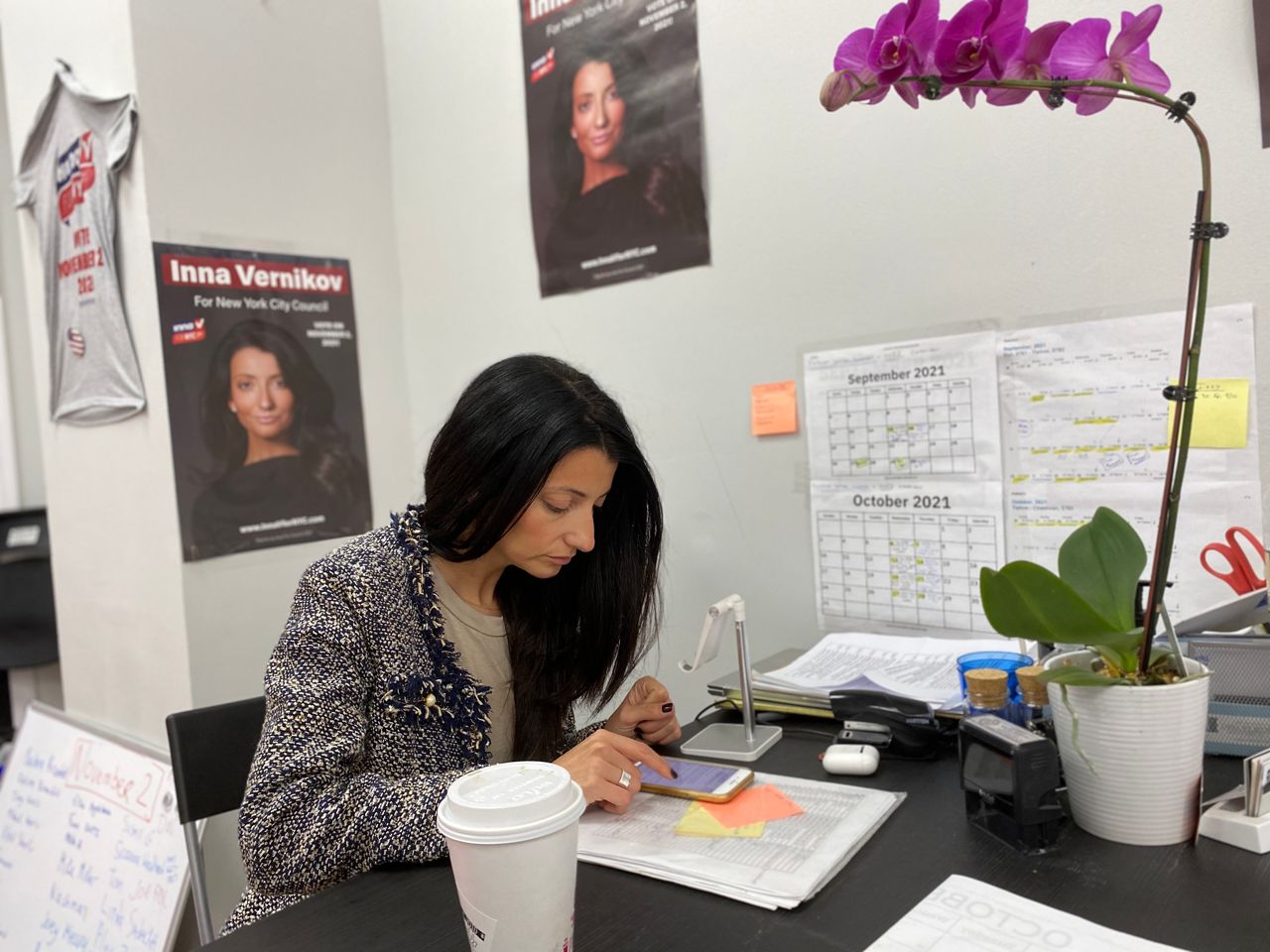 Inna Vernikov, the Republican candidate, has accused her opponent of spreading lies about her. (NY1/Ari Ephraim Feldman)

Saperstein, she added, has declined debate requests. On her campaign office’s window, one word per sheet of paper, reads the sign: “MY OPPONENT REFUSES TO DEBATE ME.”

Saperstein did not respond to multiple interview requests. 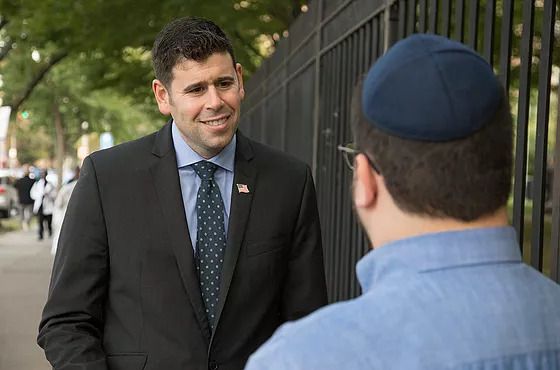 Steven Saperstein, a former Republican candidate in the district, is now running on the Democrat line. (Courtesy of Saperstein campaign)

Vernikov, who immigrated to New York as a 12-year-old refugee from Ukraine in 1996, said that she was not interested in politics until watching the scandal that unfolded in the wake of the attack on the U.S. embassy in Benghazi. Years later, she said, her decision to run for public office came around the time she was “attacked” during a Black Lives Matter protest while in her car on the Brooklyn Bridge, and saw police officers being “attacked” as well.

“I just decided I feel that this country and this city is moving in the wrong direction, and I feel that the Democratic politicians are responsible for it,” she said.

If Vernikov is knocked by some as running a negative campaign —  in a recent Instagram post, she accused Saperstein of “lying to all of you, about everything” — she prefers to call it a “truthful” campaign.

“I feel a responsibility to expose the lies of my opponent so the people of this district can see who the candidates are,” she said.

Vernikov, despite this being her first campaign, comes with strong political support, such as from Dov Hikind, a Democrat, who represented part of the district in the state Assembly for 35 years, and for whom Vernikov briefly worked as a part-time aide. Vernikov said that David Storobin, a Republican, who represents the area in the state Senate, is her campaign manager. (Storobin’s office did not respond to an interview request.)

By the usual metrics, Saperstein has the edge. He has out-fundraised Vernikov by hundreds of thousands of dollars, and going into the final weeks of the race has a balance of about $125,000, compared with Vernikov’s $54,000, according to data from the city’s Campaign Finance Board. Then there’s the $100,000 the Common Sense NYC Super PAC may run up before Tuesday on Saperstein’s behalf.

Yet as with other areas of Orthodox Brooklyn, these leadership organizations seem to sense they are losing ground in influencing the local vote. In a recent text message, purportedly from the FJCC, sent to community members on WhatsApp, and shared with NY1, the sender encouraged voters to prioritize community clout over personal conscience by choosing a council member who would join the body’s overwhelming Democratic majority.

“Don’t waste your vote,” the message read. “This is not the time to make a political point. We are supporting those candidates in the best position to help our community effectively.”

Josh Mehlman, the FJCC’s chairman, did not respond to an emailed list of questions.

“There's a lot of anti-establishment feeling right now,” said a political consultant who has worked with Republican campaigns in the area, and who asked for anonymity to discuss the race candidly. “Maybe some of the old endorsements, and that playbook, is not as useful as it used to be.”

Local frustration with vaccine mandates dovetails with that issue, observers say. Citywide, a storm is brewing over potential staffing shortages as a vaccine mandate for all municipal workers goes into effect Monday. The winner of District 48’s contest may join the council when it is still a top issue, since the seat remains empty after its previous occupant, Chaim Deutsch, was kicked out after admitting he filed a fraudulent tax return.

Vaccination rates in the area are around the middle of city ZIP codes, between 55% and 61% fully vaccinated, according to city data. Citywide, two-thirds of residents are vaccinated.

Vernikov said she is hearing that from both people born in the former Soviet Union, who she says tend to be distrustful of the government, as well as American-born Democrats.

“They’re sick and tired of the government overreach, and they'll vote for me just on that issue,” she said.

Vernikov declined to say whether she is vaccinated, and said she opposes mandates. (In response to a question about whether he supports vaccine mandates, Saperstein told Brooklyn Paper, “I think that people need to make the decision that is best for themselves, their family, and their community.”)

Elie Rubinstein, who has lived in the area for 25 years and who has worked in community nonprofits in District 48, said it’s not clear how motivating the mandate issue is, especially since some pro-vaccine Democrats may come out to defeat someone who opposes compulsory vaccination.

“There's no number, this percentage support and this do not,” he said.

Though Vernikov, if she wins, would not be able to join the council in time to have any impact on the municipal worker vaccine, she is expecting the issue of mandates to continue to be relevant in her term — and she plans to do her best to counter the mandates in the council.

“I think people feel they’re more skeptical about this than anything else,” she said.