With outline of agenda in hand, President Biden heads to Europe

President Joe Biden heads to Europe on Thursday for a slew of meetings with global leaders focused on the global economy and climate change, along with a formal visit to Pope Francis, as the president seeks to solidify some of his policy priorities both at home and abroad.

The trip is Biden’s second to the continent as president. He’ll first stop in Rome for the G20 summit, a gathering of the world’s major economies, before heading to Glasgow, Scotland for the U.N. Climate Change Conference.

In addition to meeting with the pope, he’s also scheduled to hold a bilateral meeting with French President Emmanuel Macron, who last month recalled his country’s ambassadors from the U.S. after the Biden administration announced a submarine deal with Australia that was seen as an unexpected snub to France.

And as Biden prepares to talk about his economic and climate objectives with world leaders, his domestic goals on the same issues are closer to the finish line than ever, after the White House unveiled a framework Thursday for the president's massive social and climate spending bill.

As he had hoped, President Biden will fly to Europe Thursday with at least an outline of a deal in hand as he meets with world leaders, aiming to both both illustrate the United States’ concrete commitment to climate and to elevate his domestic policy values to the world stage.

"It's a good day," Biden said Thursday morning as he arrived on Capitol Hill to meet with Democrats about his agenda.

After arriving in Rome on Thursday night, President Biden and First Lady Jill Biden will visit Vatican City on Friday, both for a larger, formal meeting with Pope Francis and time for the president and the pope to speak one-on-one.

It will be the president’s fourth time meeting the pope and “they’ve exchanged letters,” National Security Adviser Jake Sullivan said Tuesday. They’re expected to discuss issues including “ending the COVID-19 pandemic, tackling the climate crisis and caring for the poor,” according to the White House. 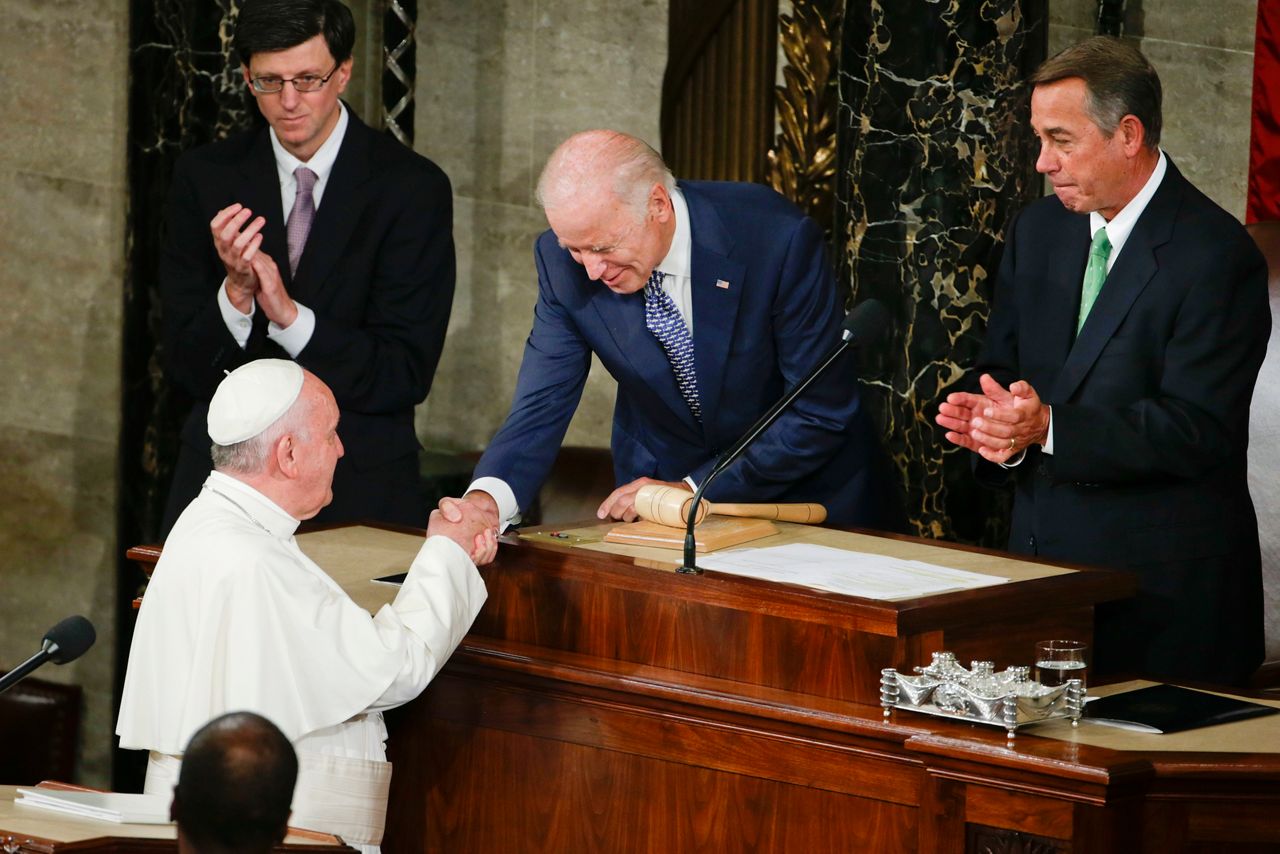 FILE - In this Sept. 24, 2015, file photo Vice President Joe Biden shakes hands with Pope Francis on Capitol Hill in Washington, prior to the pope's address to a joint meeting of Congress, making history as the first pontiff to do so. House Speaker John Boehner of Ohio is at right. Biden is scheduled to meet with Pope Francis this coming Friday at the Vatican. (AP Photo/Pablo Martinez Monsivais, File)

President Biden will then meet with his Italian counterparts, including President Sergio Mattarella and Prime Minister Mario Draghi.

Finally on Friday, he will meet with French President Macron, as promised in Sept. after the diplomatic spat that unfolded after the U.S. rolled out a nuclear-powered submarine deal with Australia, usurping a longstanding submarine contract between France and Australia.

Biden and Macron first spoke by phone after the announcement, and Secretary of State Antony Blinken made a diplomatic trip to Paris earlier this month to help smooth things over. 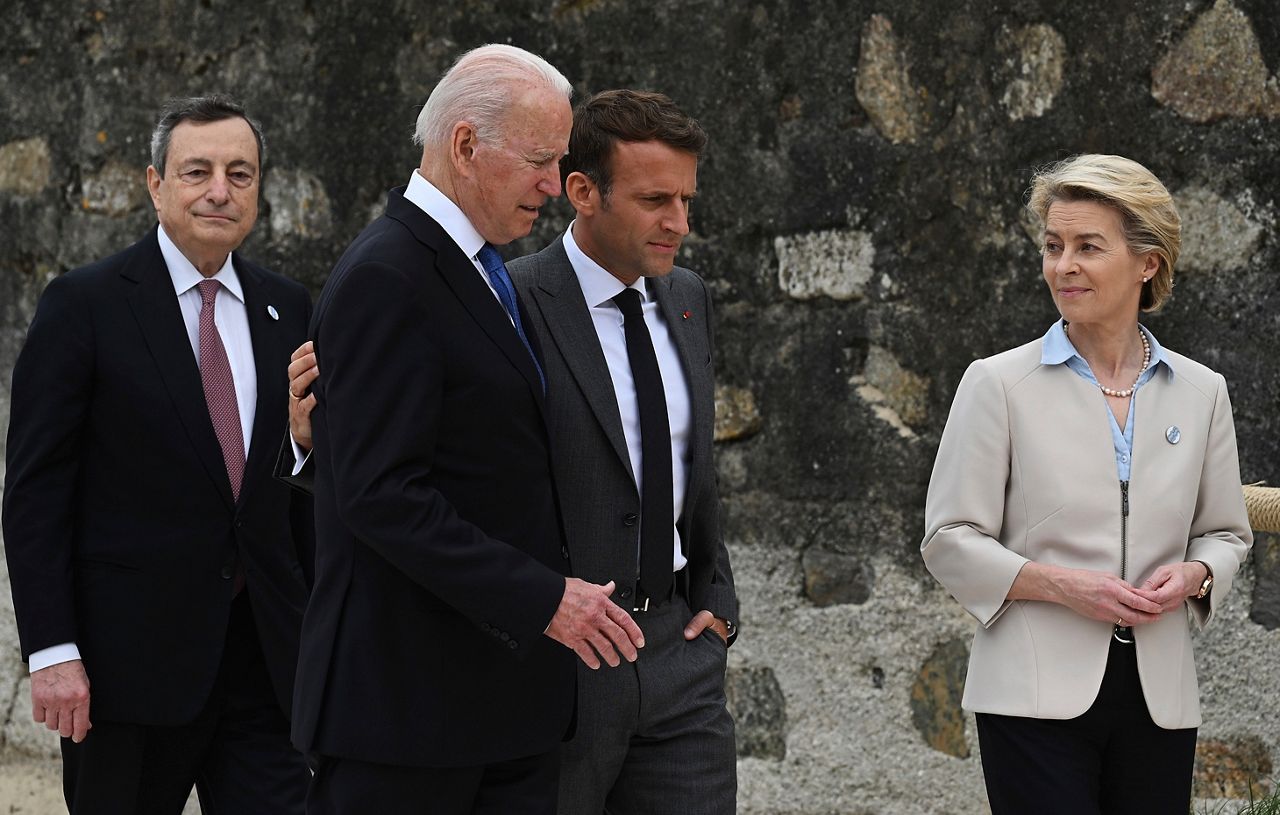 On the weekend, President Biden will participate in the annual summit of G20 countries, which represent the world’s largest economies and make up 80% of global gross domestic product altogether.

Outside of official sessions about the international economy, President Biden will engage with leaders “on the margins” as usual, National Security Adviser Sullivan said Tuesday.

He’ll be focused on at least three key topics, Sullivan outlined: supply chain issues and resilience, energy prices as the cost of gas remains high and the status of Iran’s nuclear program.

Several rounds of talks this year between U.S. and Iranian officials in Vienna weren’t enough to restore the 2015 Iran nuclear deal, which former president Donald Trump withdrew from in 2018.

“Obviously, we closely monitor the progress in Iran's nuclear program,” Sullivan said Tuesday. “We had a lid on that program. Now we do not because we don't have that deal. So our first and highest priority is to get back to the table.”

Earlier this week, the U.S. envoy to Iran said that negotiations were in a “critical phase” of determining whether or not the nuclear deal could be revived.

And more broadly, the U.S. hopes to come out of the summit with a concrete outcome — a final approval from the G20 countries to raise the global minimum tax on large companies to 15%, after years of talks on the issue that were boosted when President Biden took office.

The leaders of China and Russia will not attend the G20 gathering, though, making productive conversations with those countries “more difficult,” Sullivan admitted, though he said the U.S. still plans to engage with representatives from the two countries.

The last leg of President Biden’s week in Europe will focus on climate, a core part of his domestic “Build Back Better” agenda as its final pieces are shaped in Washington.

Biden is scheduled to give a major speech at the conference, in which he’s likely to emphasize U.S. commitments to fight climate change and also paint those efforts as job creators. The president so far has set a goal of cutting carbon emissions in half by 2030 in order to get to net-zero emissions by 2050, with a focus on the economic benefits.

“When I think climate, I think jobs. Good-paying jobs, union jobs,” Biden said on a trip to Hartford, Conn. to promote his agenda earlier this month.

And while he won't have the climate portion of his Build Back Better agenda signed into law, that portion of the spending bill emerged as the largest, with little trimmed from the White House's original proposal. In total, the climate aspects of the legislation would weigh in at $555 billion.

According to the framework released Thursday, the package would include a ten-year expansion of clean energy tax credits, funding for a Civilian Climate Corps, investments in climate resilience, including to combat extreme weather and natural disasters and $110 billion to boost supply chains for things like solar, batteries and cleaner building materials, among other provisions.

On a call with reporters, senior administration officials touted it as the "largest effort to combat climate change in history," 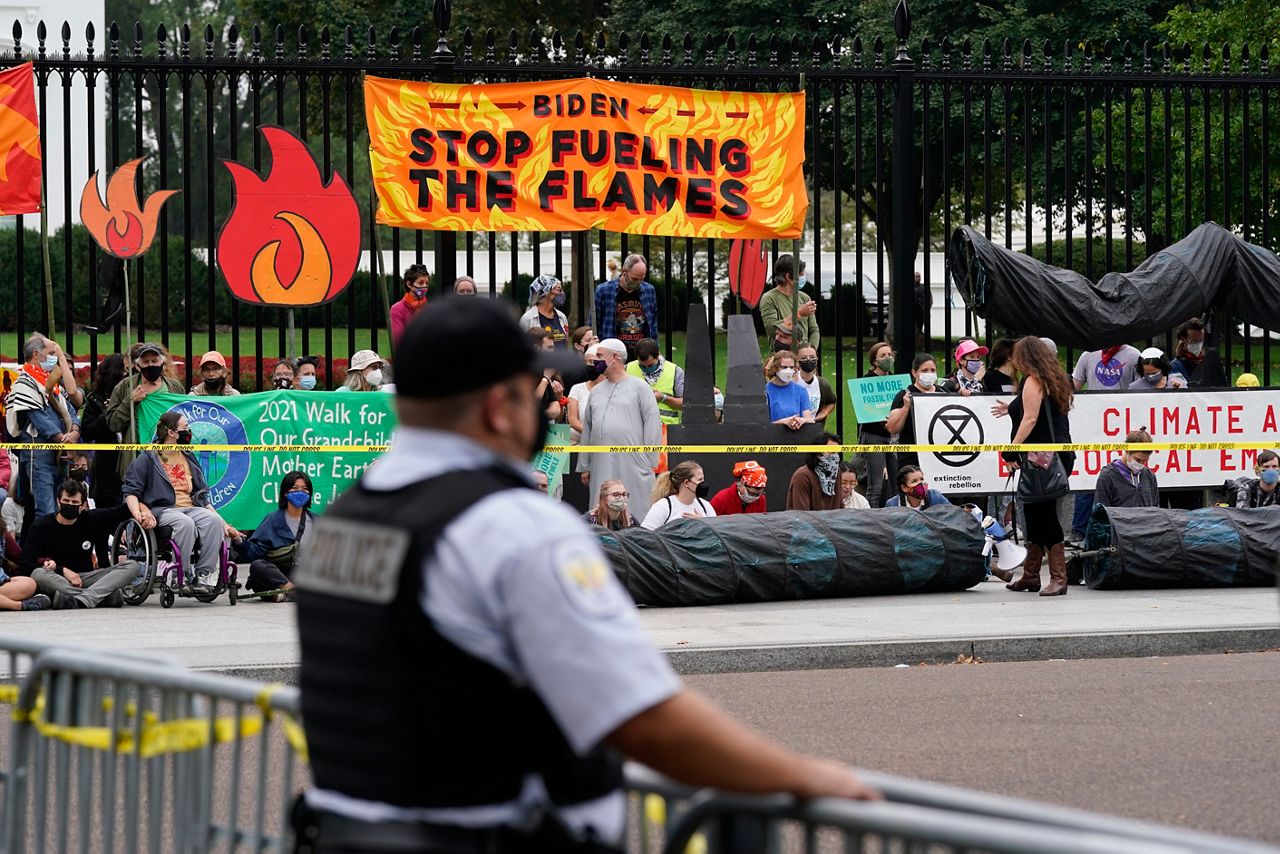 Protesters gather to call on the Biden administration to do more to combat climate change and ban fossil fuels outside the White House in Washington, Tuesday, Oct. 12, 2021. (AP Photo/Patrick Semansky)

President Biden as recently as Monday said that he hopes to have a deal in hand when he leaves the country this week, and Democrats had set a goal of wrapping up negotiations by Oct. 31, before Biden heads to Glasgow for the climate gathering.

Democrats also hoped to schedule a vote in the House on the $1.2 trillion Bipartisan Infrastructure Framework, which the Senate already passed.

That's partly why President Biden visited Capitol Hill early Thursday to meet with House democrats, and Speaker Nancy Pelosi called for the vote to happen as soon as possible. It was unclear whether that would get approved by Sunday, since House progressives have tied that bill to a vote on the broader spending bill.

"Everybody's on board," Biden said when arriving for the meeting with congressional Democrats.

As he travels to Europe, White House officials downplayed the need to have the bills passed before the president's trip, saying that U.S. allies would understand that the agenda, including historic climate provisions, was in its homestretch.

“I think what the allies are looking at is the effort that President Biden has undertaken to design and now negotiate an ambitious, effective practical set of investments,” National Security Adviser Jake Sullivan said Tuesday.

“You've got a sophisticated set of world leaders who understand politics in their own country and understand American democracy,” he added. “I don't think that world leaders will look at this as a binary issue. Is it done? Is it not done? They'll say: Is President Biden on track to deliver on what he said? He's going to deliver and we believe one way or the other he will be on track to do that.”