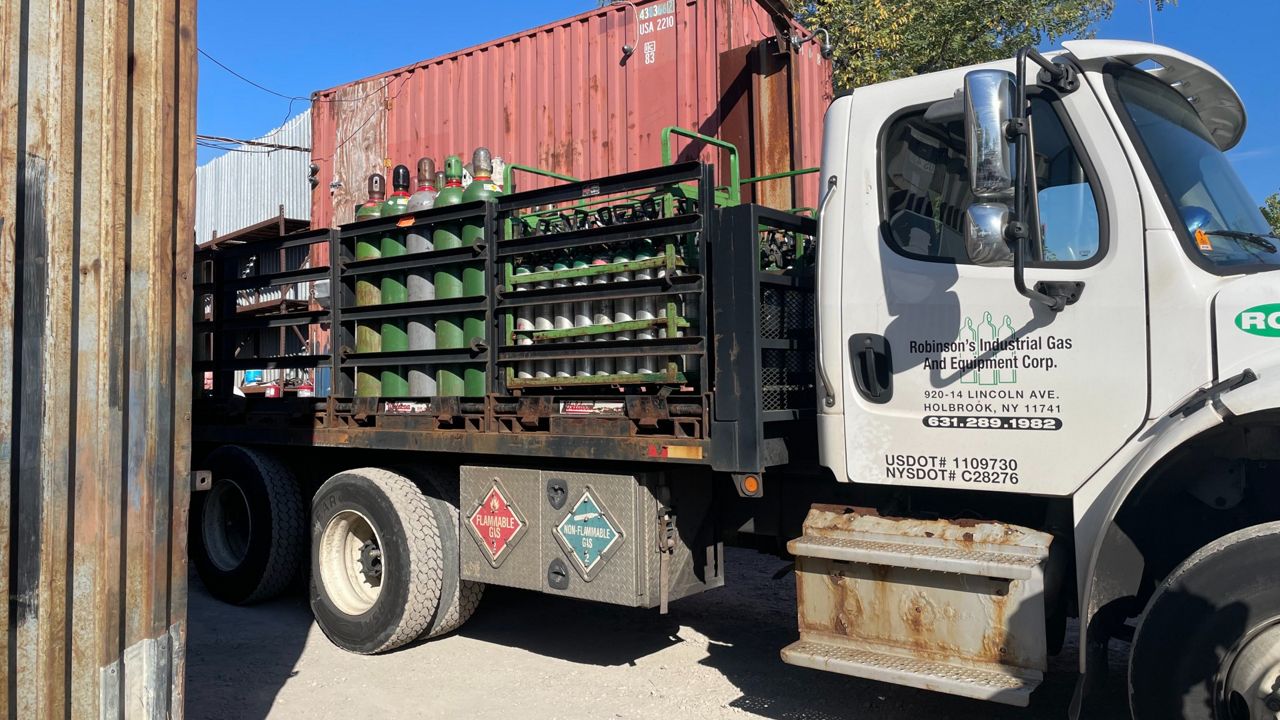 Propane cylinders on a truck in Queens. (NY1/Gabriel Lugo Ortiz)

NYC to reinstate ban on propane heaters for outdoor dining

Many five borough eateries and bars invested in propane heaters for their outdoor dining areas last year after the city temporarily lifted its ban on the devices amid the pandemic-fueled pause on indoor dining. A spokesperson for de Blasio on Wednesday, however, confirmed that the ban would be phased back in.


“Look, I really listened to the Fire Department. They’re the experts on health and safety when it comes to propane,” the mayor explained at his daily briefing Thursday morning. “[The] Fire Department feels strongly, and I agree with them: propane needs to be phased out.”

"Open Restaurants" participants that shelled out money for propane heaters last year will be eligible to receive grants of up to $5,000 from the city to buy electric and natural gas heaters ahead of the winter dining season, the NYC Hospitality Alliance — which represents thousands of New York City eateries — noted in a press release.

But the alliance denounced the city’s decision as a “blow to restaurants hoping to use propane heaters again as they’re still trying to recover from the pandemic,” adding that there were “no reported safety incidents” involving the heaters last year.

James Mallios, the managing partner of Manhattan restaurant Amali, is now figuring out the best options when it comes to keeping his outdoor patrons warn this winter.

“After I talk to you and run down to Home Depot and see that all the electric heaters are sold out, I’ll figure out how to rent a car and drive down to Louisiana to buy $1,500 electric heaters that have one-eighth the strength of the propane heaters,” Mallios told NY1 reporter Stef Manisero.

Mallios said, on any given day, between 25% to 50% of the restaurant’s revenue comes from outdoor seating.

The Fire Department says that, last winter, when propane heating was allowed, there were no reported incidents involving propane.

Mallios says, after all the struggles of the pandemic, the decision by the city is yet another blow.

“We can have them in Nassau and Westchester and LA and Suffolk, but we can’t have it in NYC?” he said.

When asked what Amali means to him, it took him a few minutes to find the words.

While de Blasio on Thursday acknowledged that the city had a “good experience” allowing restaurants and bars to use propane heaters last winter, he said the ban was only lifted because “everything was on an emergency footing.”

“Now that we’re talking about a long-term approach — outdoor dining has been an amazing success; I want it to be part of the future New York City for years to come — but we now have to make sure it is sustainable, it is safe, it’s done the right way,” he said. “So we’re giving the restaurants the next month to do that. We are giving financial support.”