New York City’s economic recovery index held onto some of its momentum for a second week, as it rose by another point to a score of 76 for the week ended Oct. 2. Falling COVID-19 hospitalization rates, sustained growth in restaurant reservations, and a decline in unemployment claims helped boost the score, while relatively lackluster performance in the city’s home and rental markets dampened gains.

This week, a federal judge upheld the city’s “Key to NYC” program requiring proof of COVID-19 vaccinations for use of indoor dining and entertainment venues. Since the program went into effect back in August, approximately 6,760 businesses have reportedly received warnings for failing to enforce the mandate and at least 14 have received $1,000 fines for failing to comply. 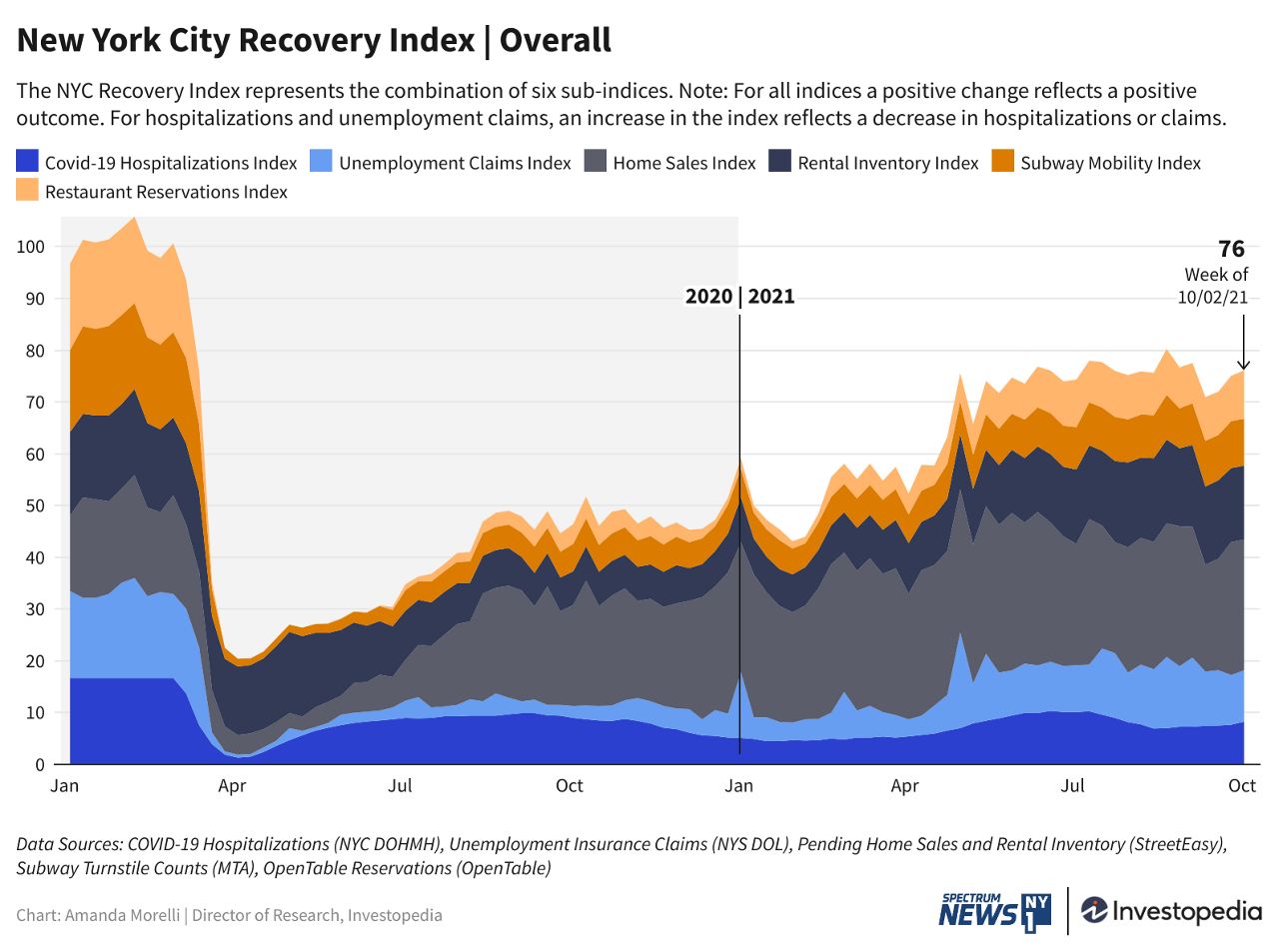 New York City’s recovery stands at a score of 76 out of 100, according to the New York City Recovery Index, a joint project between Investopedia and NY1. Over a year and a half into the pandemic, NYC’s economic recovery is roughly three-quarters of the way back to early March 2020 levels. 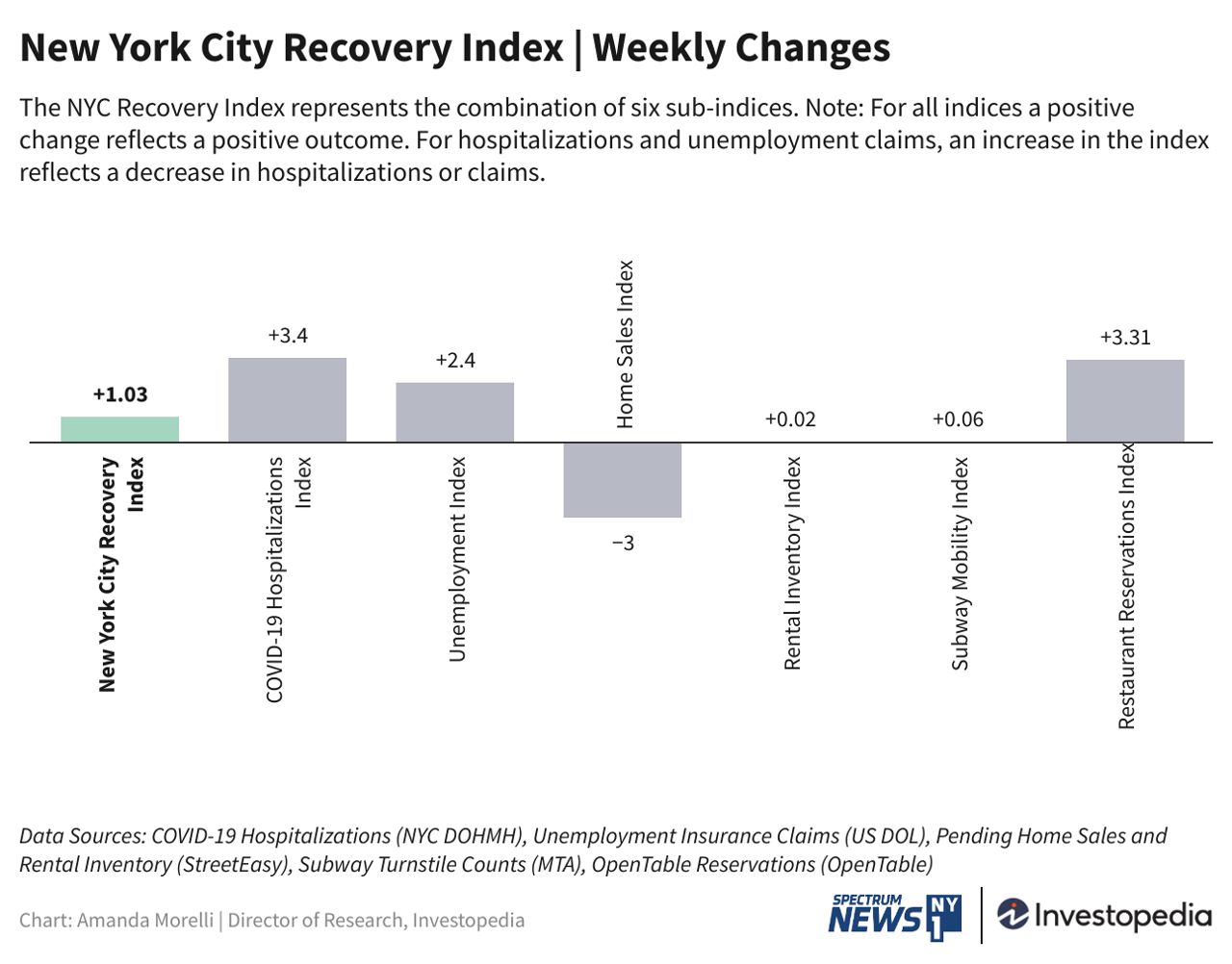 As of Oct. 9, New York State has fully vaccinated approximately 64.8% of its broader population, and is on pace to fully vaccinate 70% by late October. In a national ranking of state vaccination efforts, New York State came in 13 out of 50 states, districts, and territories, according to CDC data and analysis by Verywell Health.

In contrast to the week before, unemployment claims fell from 73% to 66% above pre-pandemic levels as of Oct. 2, showing marked progress from the week prior. However, the measure remains far from lows attained just a few weeks earlier, when claims came within 25% of a full recovery, and continues to experience sizable swings in both directions from week to week.

Pending home sales in New York City increased by another 113 homes as of Oct. 2, but the weekly rise paled in comparison to a higher proportion of home sales over the same period in 2019, resulting in a three-point drop for the city’s home sales index. Still, the magnitude of sales in the city far surpasses pre-pandemic levels, with 602 homes pending sales this last week compared to 489 for the same week in 2019. By borough, sales in Manhattan are up 74% compared to pre-pandemic levels, while sales figures in Queens are up 64.5%, and Brooklyn is up 52%.

New York City’s rental index lingered at a score of 85, as the city’s supply of available units fell even further by another 92 vacancies. Though challenged by a shortage of vacancies, the rental market is the second-highest measure in the index and is close to having effectively recovered from the COVID-19 pandemic.

Subway ridership hardly changed as of Oct. 2, at roughly 45.5% below pre-pandemic levels. At this rate, the measure is mildly closer to recovery than the 50% mark it hovered near for several months, but has significant room for improvement. The Metropolitan Transportation Authority (MTA) estimated a trailing seven-day average of close to 2.69 million riders on public transport.

Restaurant Reservations On a Roll

The city’s restaurant reservation index posted another solid week of gains as of Oct. 2, as reservations moved from 47.46% to 44.15% below 2019 levels, according to OpenTable estimates. Like subway ridership, restaurant reservations had lingered in a sustained lull near the 50% mark for several months, and could be on their way to breaking the trend if the new growth streak holds.