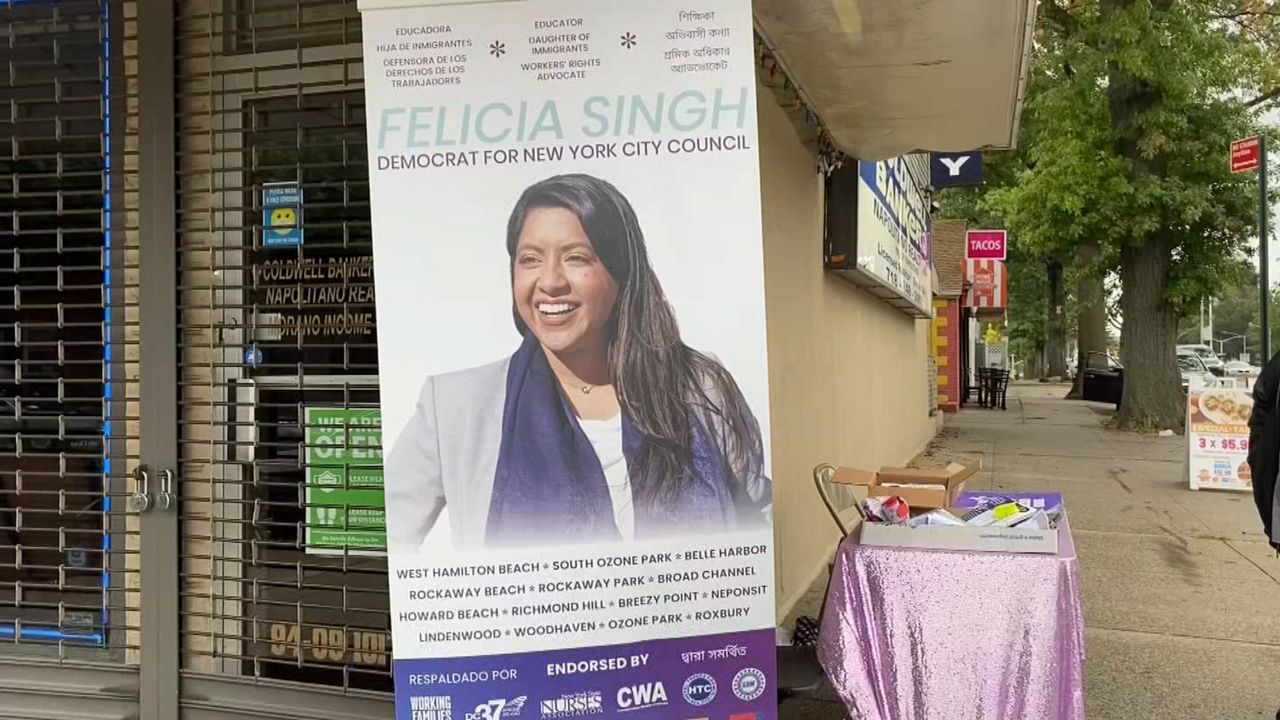 Democrats seek to flip Queens City Council seat, the last one held by a Republican outside of Staten Island

The race to fill a Queens City Council seat held by a Republican for 12 years is perhaps one of the most contentious campaigns in the city.

It pits a Democratic child of immigrants against the Queens County Republican chairwoman.

It’s a battle to represent a diverse swath of the city, where Thin Blue Line flags fly in one stretch and signs in Bengali are posted in another.

In an apartment building, he introduced himself and the candidate he’s supporting: “This is Felicia here; I’m your Queens borough president.”

Then, at a row house, Singh took a turn asking for the residents’ votes: “I’m a teacher. I’m a daughter of immigrants. And I would honored to serve you in the City Council, with your vote of course.”

In one of the city’s few competitive general election races, Singh faces Joann Ariola, the Queens GOP chairwoman backed by the term-limited Republican council member who held the seat for 12 years, Eric Ulrich.

And the district has diversified, racially and socio-economically.

“It’s about representation,” Richards told NY1. “You know, Queens is the most diverse mecca in the world, I like to say: 350 languages and dialects spoken here, over 200 countries represented here. And we need to have people who know these communities.”

“We cannot risk any more corruption that would make us lose funding, lose resources within our community,” she told NY1. “And we need to elect someone who’s navigated systems that don’t work for everyday New Yorkers. And that’s why I’m te best choice.”

Ariola has touted her civic leadership in her campaign outreach.

“Hi, my name is Joann Ariola and I’m at the Ozone-Howard Little League. We’re here to show our support for the league and the NYPD,” she says in a Facebook post from April.

Ariola did not respond to NY1’s repeated requests for an interview.

Her spokesman said she was unavailable and did not provide written responses to NY1’s questions.

Some of her surrogates also did not accept requests to be interviewed.

Ariola is endorsed by the five NYPD unions.

Singh is backed by other unions, including 32BJ and DC37.

While she says she supports reducing the scope of the NYPD, Singh says residents she meets primarily voice quality-of-life concerns such as “noise or parking or issues about trash in the community.”

Also on the ballot is third-party candidate Kenichi Wilson, a community board chairman who has qualified for matching funds.