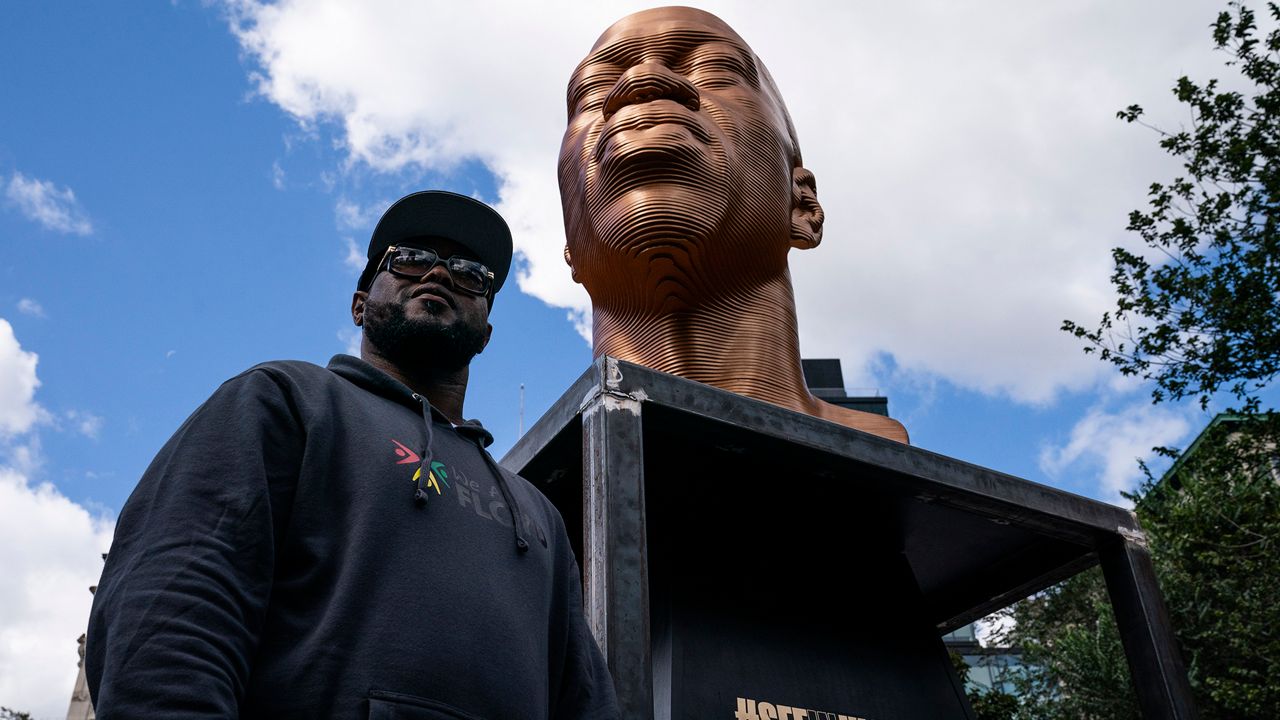 Terrence Floyd stands beside a sculpture of his brother George Floyd, one of three sculptures unveiled as part of the "SEEINJUSTICE" art exhibition that also features the likenesses of Breonna Taylor and John Lewis, Thursday, Sept. 30, 2021, at Union Square. (AP Photo/John Minchillo)

Dennis Owusu-Ansah said he worries about police brutality every time another Black person dies during an interaction with authorities.

An organization that aims to use art to affect positive societal change, Confront Art, revealed statues of George Floyd, Breonna Taylor and the late Rep. John Lewis in Union Square Park on Thursday. As the bronze sculptures stand tall, Owusu-Ansah said the message is loud and clear.

The exhibit is called SeeInjustice. The artists say they want to raise awareness about racism in the United States. George Floyd and Breonna Talyor were both killed by police in 2020.

Following their deaths, protests broke out calling for law enforcement to better respect the lives of Black people around the country.

“What happened to my brother was the straw that broke the camel's back," said Terrence Floyd, George Floyd's brother.

Terrence Floyd has been advocating for families torn apart by police brutality and racism.

“We all need each other. It doesn't matter, race, creed or color. We are all human beings, we all have human rights. We all have a purpose," said Floyd.

Chris Carnabuci is the sculptor.

“Art creates an environment for civil discourse. We can talk about our differences and come to some understanding of each other's perspective. If we can do that, that's the first step. From understanding comes action, and from action comes change," said Carnabuci.

Lewis spent his life fighting for equality, and organizers here hope the statues lead to actions that correct racist wrongs in society.

Owusu-Ansah said it is only fitting that Lewis' sculpture stands at the head of the park.

The sculptures will be here in the park until Oct. 30.