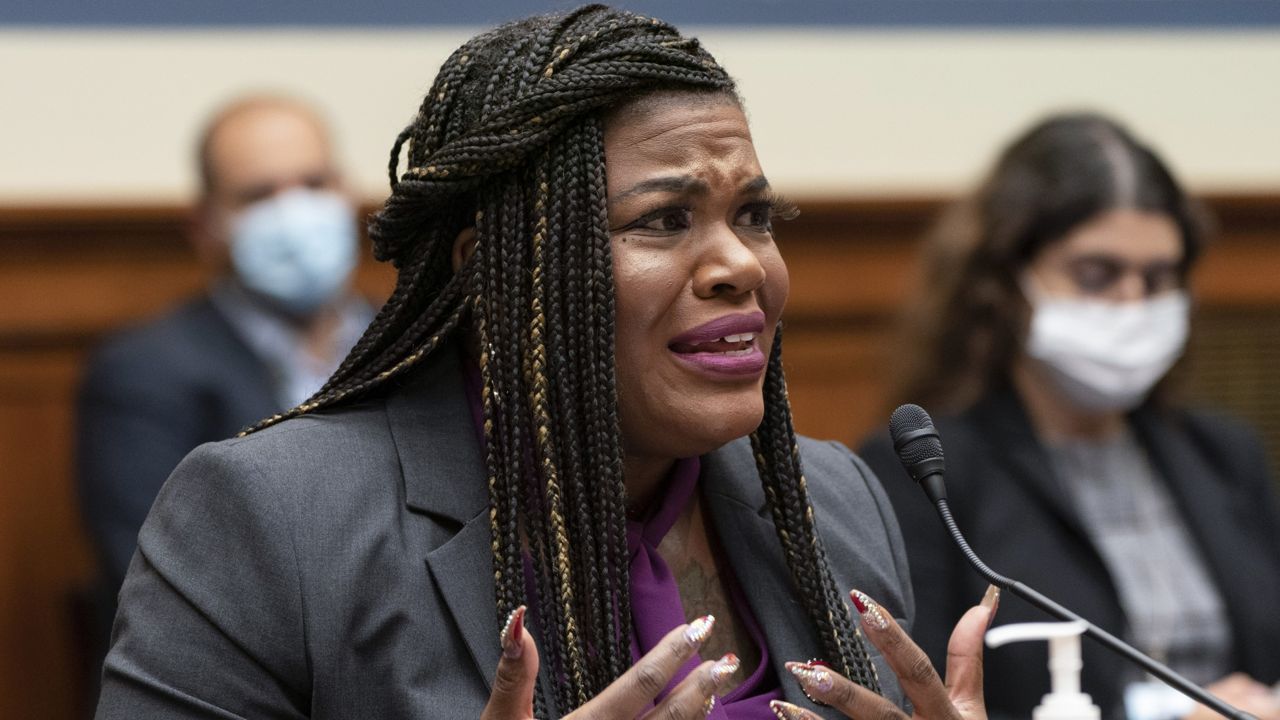 Rep. Cori Bush, D-Mo., testifies about making her decision to have an abortion after being raped, Thursday, Sept. 30, 2021, during a House Committee on Oversight and Reform hearing on Capitol Hill in Washington. (AP Photo/Jacquelyn Martin)

House Democrats share personal stories of abortions: 'We have nothing to be ashamed of'

Three Democratic lawmakers testified about their personal experiences with abortion on Thursday in front of the House Oversight Committee, a hearing that was scheduled in the wake of Texas’ restrictive anti-abortion law that went into effect early this month.

Reps. Cori Bush, D-Mo., Pramila Jayapal, D-Wash., and Barbara Lee, D-Calif., each spoke in turn about undergoing the medical procedure as the congressional committee examined how to respond to conservative states that are passing similar laws limiting abortion access.

Bush described in gut-wrenching detail a sexual assault that resulted in a pregnancy when she was only 17.

“Today I sit before you as that nurse, and as a pastor, activist, survivor, single mom, and Congresswoman to testify that in the summer of 1994 I was raped, became pregnant, and chose to have an abortion,” Bush said in her opening remarks.

The decision to undergo an abortion was hardly an easy one. Bush, who is Black, described being discriminated against while undergoing the procedure, saying the clinic staff talked to her “like I was trash and it worsened my shame.”

“Afterwards while in the changing area, I heard some other girls, all white, talking about how they were told how bright their futures were, how loved their babies would be if adopted, and that their options and opportunities were limitless,” Bush continued. “In that moment, listening to those girls, I felt anguish and like I had failed.”

Bush went on to say while the choice was difficult, it felt “freeing” to know she had options.

“To all the Black women and girls who have had or will have abortions — know this: We have nothing to be ashamed of,” Bush concluded. “We live in a society that has failed to legislate love and justice for us. But we deserve better. We demand better. We are worthy of better.”

Rep. Jayapal recounted her own experiences after the birth of her first child, who was born 26.5 weeks premature at only 1 pound and 14 ounces. Jayapal suffered debilitating postpartum depression, which was only diagnosed after she contemplated suicide. The strain ultimately ended her relationship with her first husband.

“I consulted with my doctors who told me that any future pregnancy would likely also be high risk to me and the child, similar to what I had gone through with Janak,” Jayapal said of her first pregnancy. “I very much wanted to have more children, but I simply could not imagine going through that again.”

Jayapal said while she did not face the compounding factors of medical racism, the right to abortion should be protected for individuals living in every state in the country.

“Because of the cruel Texas abortion ban and the other state abortion bans currently being litigated by those unaffected by the outcome, many people may not have the same choice as I did,” she said. “That is unacceptable. Abortion bans are not a just political issue, they do real harm to people across the country and in our most vulnerable communities.”

Lee became pregnant at age 16 in the mid-1960s. Abortion in California was illegal at the time so a family friend helped send her to a “back-alley clinic in Mexico,” she said.

She had no ill effects from the procedure, but she said many other women weren’t so lucky in that era.

One lawmaker on Thursday’s panel had a very different stance than Lee, Bush and Jayapal: Rep. Kat Cammack (R-Fla.), who offered an impassioned argument urging her colleagues to “stand for life and never glorify abortion.”

Cammack’s mother suffered a stroke in the years before Cammack was born, the congresswoman said Thursday. Both doctors and family members encouraged her mother to get an abortion when she became pregnant with Cammack out of fear for both of their health, a suggestion Cammack’s mother ultimately did not heed.

“She did something that many of my colleagues here could have done,” Cammack said of her mother on Thursday. Every woman's story is different and these decisions do not come easy. But I am grateful every single day that there were resources available for my mom, because in that moment, she chose life.”

“I am a living, breathing witness about the power of life,” she added.

No concrete legislation came out of Thursday’s session, which was intended to shed light on the issue of abortion from both political angles.

It also comes on the heels of a Senate Judiciary Committee meeting on Wednesday, a contentious hearing over the Supreme Court’s so-called “shadow docket” in the wake of the high court’s decision earlier this month to let the Texas law banning abortion after six weeks stand – at least temporarily.

Meanwhile, a federal appeals court is weighing the fate of a Missouri law that bans abortions after eight weeks of pregnancy, also with no rape or incest exceptions. And, the U.S. Supreme Court in December will hear arguments over a Mississippi law that would ban abortion after 15 weeks of pregnancy.

The hearing also looked at what the federal government can do to ensure abortion access. Options include ending the Hyde Amendment, which restricts government funding for most abortions, and passing a law guaranteeing a woman’s right to an abortion. The House passed that measure last week, but Republican opposition would almost certainly doom it in the Senate.