Musician Randy Gun points to a restaurant on Great Jones Street in the NoHo section of Manhattan that was once called the Great Jones Cafe.

It’s a spot near the Bowery where he bartended in the mid-1980s. One of his regulars was artist Jean-Michel Basquiat, who lived across the street in a building owned by another famous artist, Andy Warhol.

"Between three and four he'd come by when I wasn't open, and I'd let him in. Basically because he didn't bother me and I didn't bother him,” said Gun, who added that Basquiat would order a margarita straight up when he popped in.

Gun says after Basquiat took a trip he came in and handed him a book, “Harry's ABC of Mixing Cocktails,” published by the owner of the famous Harry's New York Bar in Paris. Gun later discovered he was given more than just a book. There was a dedication to Gun inside that said, “To Randy, for the Best Bartender in New York.”

There were also six pages of drawings in graphite and colored pencil.

"I didn't expect anything from him, you know, I was surprised,” said Gun.

The never-before-seen by the public drawings are on view in an online exhibition curated by art advisor and historian Janis Gardner Cecil. It features an interview with Gun conducted by friend David Ebony, a musician-turned-art historian and critic who told Gardner Cecil about the book Gun had held onto for more than three decades.

"The story was intriguing not only because of the importance of Jean-Michel Basquiat as an artist, but because of this really interesting relationship between Basquiat and Randy Gun, and how they got to know each other over time in New York,” said Gardner Cecil. 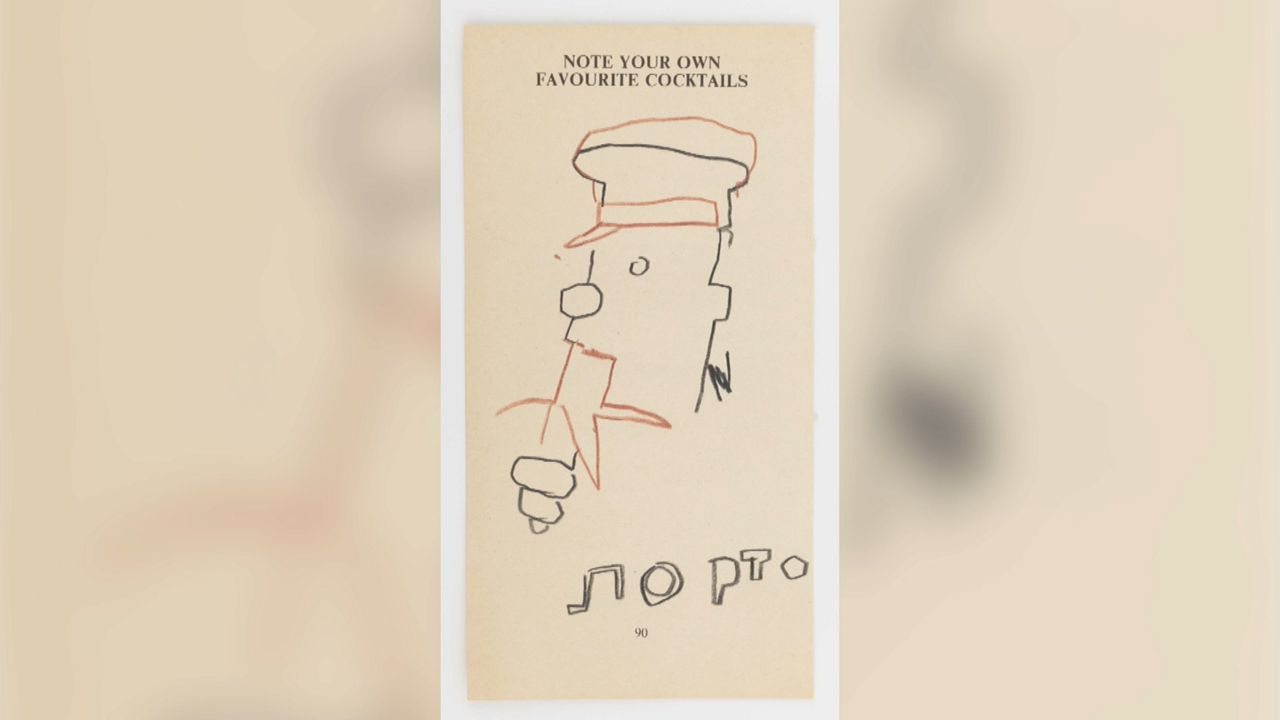 The Basquiat drawings found inside the cocktail book are on view in an online exhibition.

Gun says, at the time, he spoke with Basquiat about his drug use. Gun had recently stopped using and tried to tell the young artist he could do the same.

"Usually for an addict or an alcoholic we don't want to hear that, we surely don't want to hear about stopping,” said Gun, who added that Basquiat kept coming back to the cafe. “Then he came back and after that he gave me that book, it's a testament that maybe he was thinking about it, maybe he wanted to get himself out of this mess,” said Gun.

Sadly, Basquiat would die not long after that from a drug overdose at the age of 27. Gun was contacted a few months later about selling the book. He was offered $5,000, but decided to hold onto it.

"You know, I wasn't always thinking about money, but basically I just wanted to hold on to it,” said Gun, who says he is now ready to let it go.

The works are for sale, and we are not talking $5,000. Some of Basquiat's works go for hundreds of thousands, even tens of millions of dollars depending on the piece. Of course, art lovers who don't have that kind of cash can see the drawings online here.