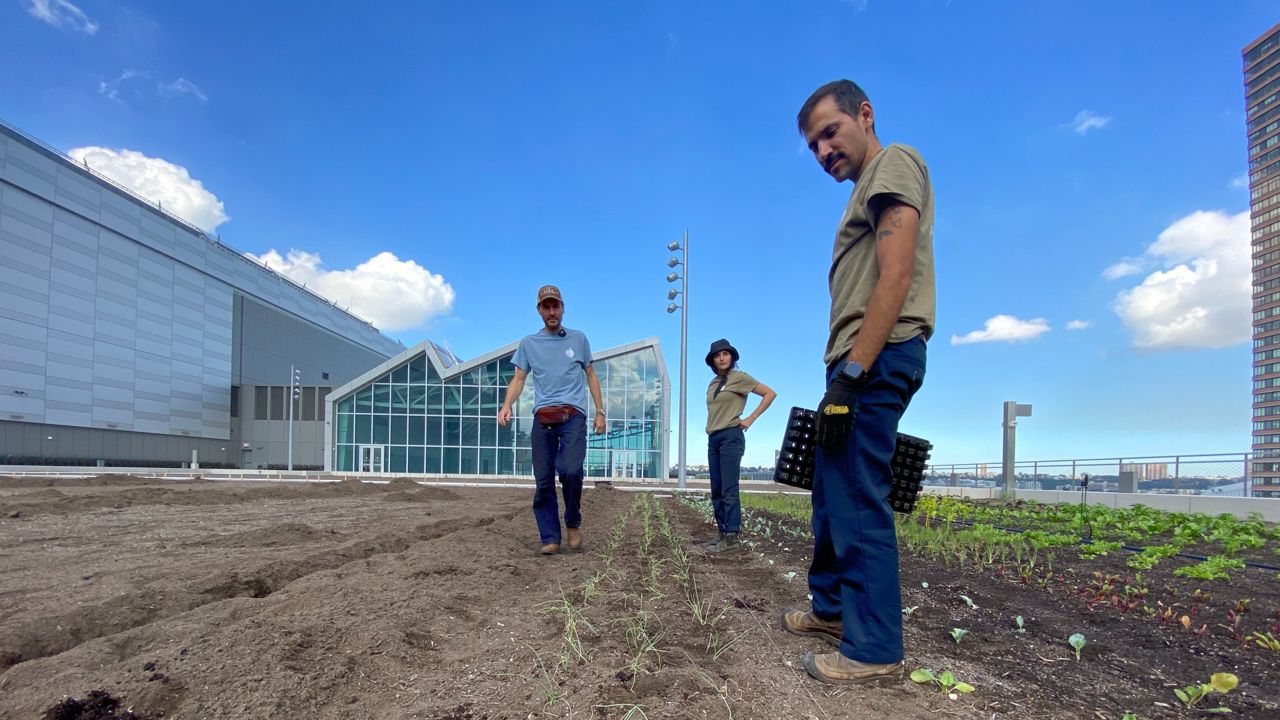 NEW YORK — While folks are checking in for an event at the Javits Center, upstairs, farmers are planting shallots. It's a one-acre rooftop farm, part of the $1.5 billion expansion project at the convention center on the West Side of Manhattan.

"There will be millions of people coming through this convention hall in the coming years, and we are excited that we can see this,” said Ben Flanner, co-founder and CEO of Brooklyn Grange, which is managing day-to-day operations at the farm with views of the Hudson River and Midtown Manhattan.

Brooklyn Grange also operates rooftop farms in Queens and Brooklyn, and is expecting to generate up to 40,000 pounds of produce each year on the Javits roof.

"Leafy greens, arugula, zucchini, cucumbers, baby carrots, and lots of herbs,” Flanner said of the expected produce. It will be passed along to the caterer for the Javits to cook as part of meals for guests at events.

A greenhouse has also been built on the roof. On the other side of the roof from the farm is an outdoor terrace, which feature the only rooftop orchard in the country with 32 apple trees and six pear trees. All of this continues the sustainability program at Javits, which already includes a nearly seven-acre green roof.

"We've got the largest rooftop solar installation in Manhattan going in, tied to our micro grid, so that's going to give us some clean energy,” said Jacqueline Tran, the energy and sustainability manager at Javits.

Tran says the building was constructed with bird-friendly glass similar to the older parts of the center to reduce incidences of birds colliding with the building by at least 90-95%.

Tran says the farm's soil soaks up rainwater, keeping it out of the sewer system and helping cut down on sewage overflow into local waterways. Water will also be captured, treated and recycled for irrigation use. Tran says this is the next chapter as the Javits works to be a model for sustainability.

"Showing the state, the city and other convention centers around the country what this venue can do beyond just be a building,” said Tran.