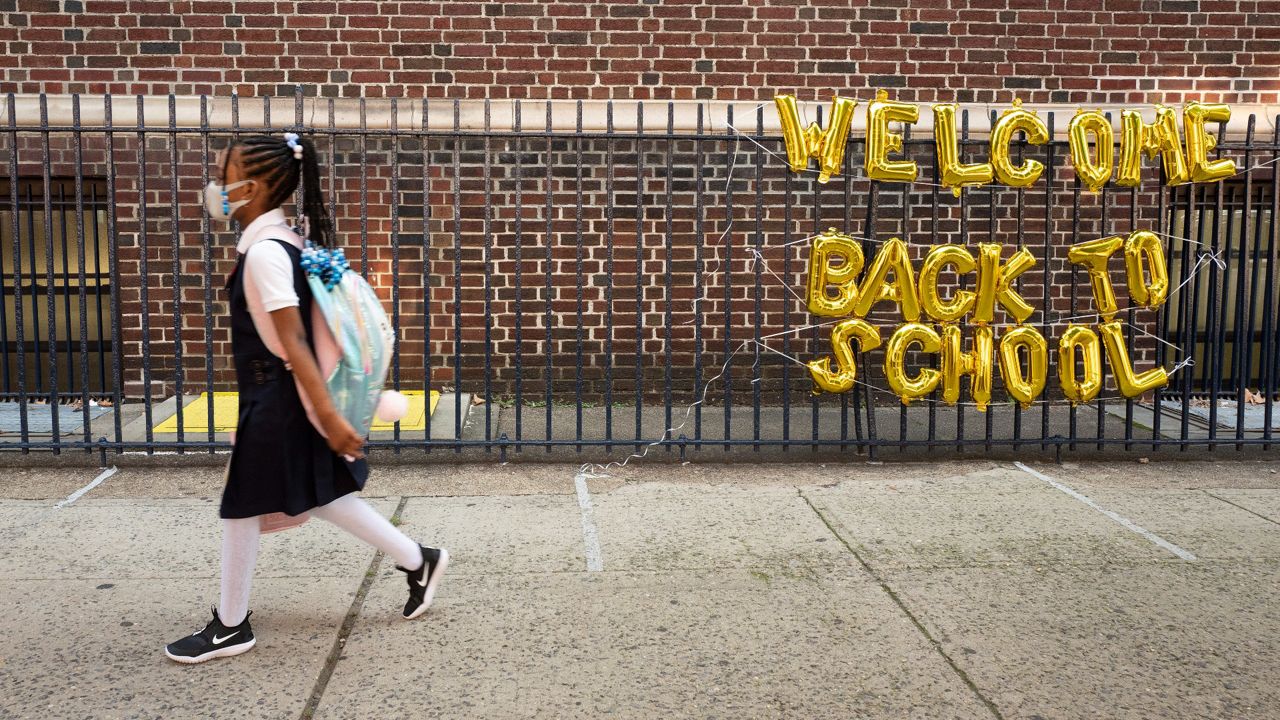 A girl passes a "Welcome Back to School" sign as she arrives for the first day of class at Brooklyn's PS 245 elementary school, Monday, Sept. 13, 2021, in New York. (AP Photo/Mark Lennihan)

Just how many students attended school on Monday? The city isn't saying.

“We'll be able to give very hard numbers when all schools are reporting in and we have a final accounting,” Mayor Bill de Blasio explained.

But the city did release a preliminary attendance rate for Monday: 82.4%, which the mayor painted as relatively good news. Last year, when more than half of students were learning virtually — first day attendance was about  80%, including in-person and remote students. In both 2019 and 2018, pre-pandemic, day one attendance was about 90%.

“We've got some ground to make up. I'm very confident we will. I think what you're going to see in the next few days is more and more kids coming in. So, what we now know is the vast, vast majority of kids showed up ready, enthusiastic,” de Blasio said.

Systemwide enrollment figures are never finalized until October, as students can still register for class until then, while others transfer or leave the system.

“Is there any way that we can have the DOE show their work and tell us how many students they expected yesterday and how many showed up?” reporter Jillian Jorgensen asked.

While the mayor praised the question, no numbers were forthcoming.

“We know, historically, that attendance grows over the first few weeks, and also families sort out which school they're going to go to in some cases, not always resolved by the first day of school. So, yes, we'll release the information we have, as you said, show our work,” de Blasio said.

One reason the raw data hasn't been shared is that Monday's attendance calculation omits 350 schools that had not yet reported their first day attendance.

“We have 350 of the 1,600 schools who haven't reported attendance rates to date yet. We expect to have that by the end of the day and be able to give a more precise number,” Schools Chancellor Meisha Porter said.

The attendance data is of considerable interest this year, with some parents saying they will keep their children home in protest of the city’s decision not to offer remote learning during the continuing pandemic. It’s unclear how many have actually done so.