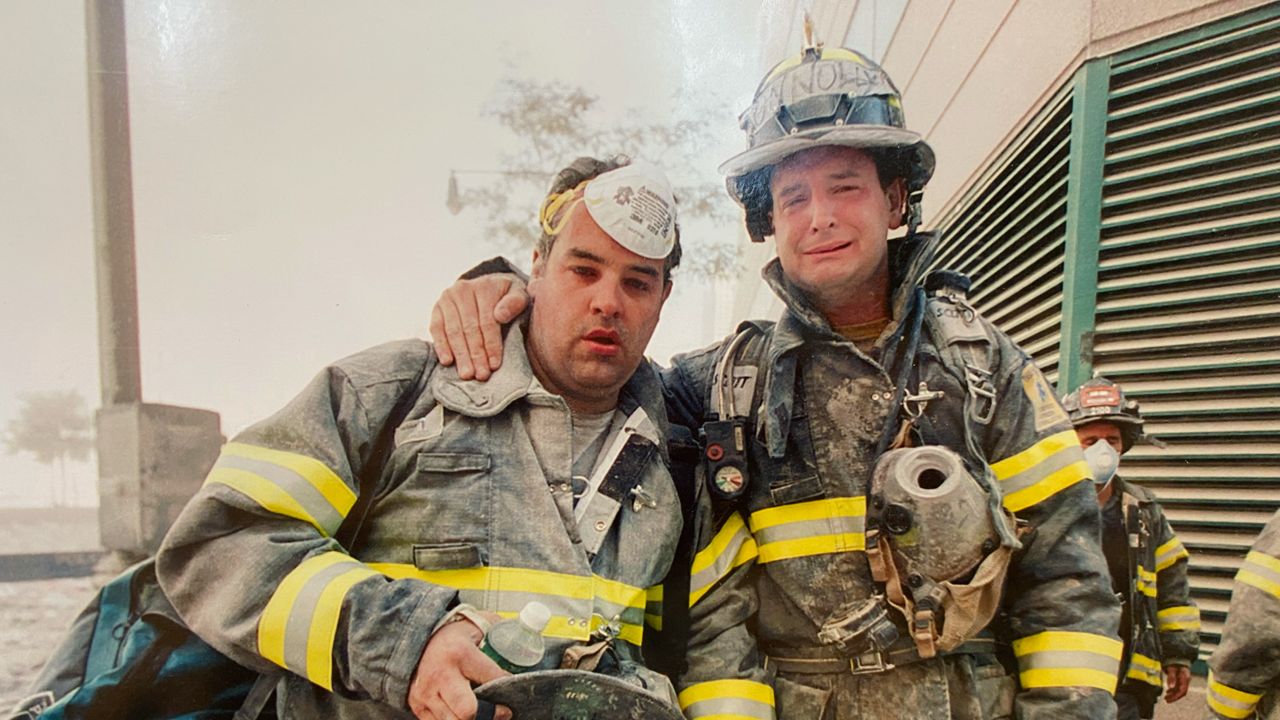 On September 11, 2001, virtually all of the more than 8,600 firefighters in the FDNY responded to the attacks at the World Trade Center. Among them were some of the 148 probationary firefighters, who had just finished a 10-week training program at the academy the day before. FDNY Captain Patrick Connolly was one of them. His first day on the job, was the worst day. Photo courtesy of Patrick Connolly.

His first day as a firefighter was on 9/11. It's a day he says he will never forget.

At the end of roll call each shift, firefighters of Ladder Company 133 in Queens honor one of the 343 FDNY members who perished on Sept. 11, 2001.

FDNY Captain Patrick Connolly started the roll call memorial, and the rest of his company embraced it.

"Going back, as you can see, we write in the day book every day we remembered one of the guys,” explained Connolly. “What it reads is ‘Today's roll call is dedicated to the loving memory of Firefighter Durrell ‘Bronko’ Pearsall Rescue 4, lost on 9/11/01 at the World Trader Center, rest in peace and never forget.’”

September 11 was not only the most devastating day of Connolly's career, but his first real day as a firefighter. Fresh out of the academy, he was originally set to start on Sept. 13. But while out on a run, with a clear view of Lower Manhattan, duty called.

"I knew it was a bad bad day about to happen, never knowing at all the magnitude of it, and what I did then, I just ran home,” said Connolly.

Connolly ran to his older brother's house, who was a firefighter in the Bronx. With little time to spare, Connolly pulled both sets of his brand new equipment out of the trunk of his car still packed in plastic.

He and his brother suited up and headed towards the Trade Center.

"We were chasing a firetruck,” Connolly explained. "I will never forget that. We were trying to get them to stop and they wouldn't stop. We were waving our helmet out the window."

So new to the job, he had not yet received equipment with identification on it. Before going into the towers, Connolly wrote his name on duct tape and put it on the front of his new helmet.

As Connolly and his brother approached the North Tower, it collapsed, trapping them under debris.

"This is a picture of my brother Brian and myself, obviously quite emotional,” Connolly said as he handled the precious photo. “My first day. We never thought — the building came down pretty much around us, he was only about four to five feet from me, but we were both buried alive. It was crazy."

Dozens of others from Connolly's class have similar stories of rushing to the Trade Center to help before their official start day.

Of the 343 firefighters that died that day, 18 of them had less than a year on the job.

Six others were instructors at the academy.

"Everyone has their own story, but it’s not about that. It’s about those we lost that day,” Connolly said.

He is one of the dwindling 1,500 active FDNY members who worked on 9/11. As more time passes, he says it has become even more important to remember those who made the ultimate sacrifice.

So each day his company will continue to share the story about another brave firefighter.