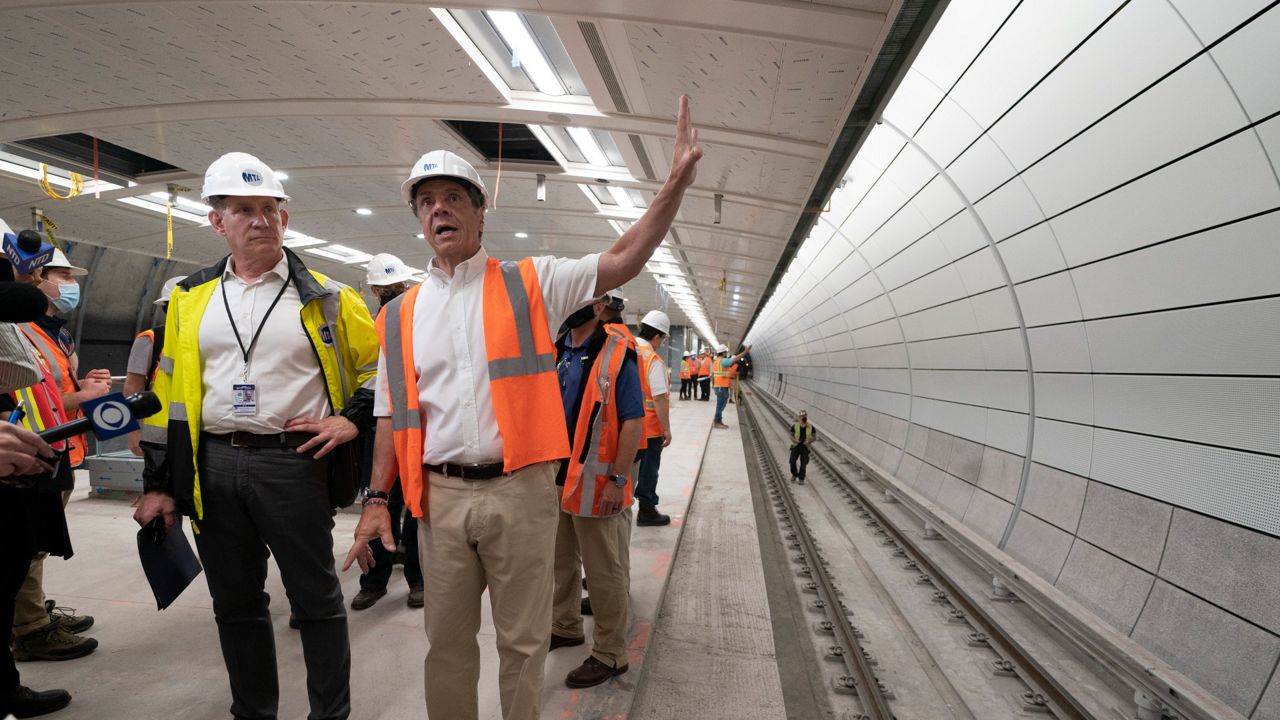 Gov. Andrew Cuomo, center, gives a media tour about progress on the East Side Access, a train tunnel that will connect rail yards in Queens with Grand Central Terminal, Thursday, May 27, 2021, in New York. (AP Photo/Mark Lennihan)

A prolific builder, Cuomo's infrastructure legacy will be felt for rest of century, expert says

From transportation to leisure, Gov. Andrew Cuomo has championed projects across the state to improve New York's infrastructure.

“There hasn’t been a governor who has done as much to improve, modernize and strengthen the state in probably 50 to 80 years,” said NYU Professor of Urban Policy & Planning Mitchell Moss.

Bridges, transportation hubs and other infrastructure around the state needed to be replaced and Cuomo delivered in a big way.

“He took on jobs that had been ignored,” said Moss.

LaGuardia Airport was an aging relic, a necessary evil for travelers, the butt of jokes around the world.

“And if you had to catch a flight, people'd be sitting up on the corridor floor for hours,“ said Moss.

Cuomo pushed through $8 billion in upgrades, including a new terminal and a $2.1 billion AirTrain just approved by the Federal Aviation Administration that will link LaGuardia Airport with the 7 train and Long Island Rail Road at nearby CitiField.

Over at JFK Airport ,the improvements may take longer to realize. Moss says there will be a modern set of terminals in the next five years to go along with a just-built hotel.

“[Cuomo] found a way to make TWA come back to life as a hotel and Convention Center. Now why is this relevant? Because JFK is the only major international airport without a good hotel on it,” Moss explained.

Cuomo plowed nearly $2 billion into rebuilding the Van Wyck Expressway, the highway leading to JFK and he replaced the crumbling Tappan Zee Bridge over the Hudson River with a new one named for his father. A new Kosciusko Bridge connecting Brooklyn and Queens is his handiwork, too.

Cuomo revived the Second Avenue subway line, a project sidelined for decades, by pushing through construction of the first phase. It was 1.8 miles of track beneath the Upper East Side. Like many of Cuomo’s big projects, he got it done by using the powers at his disposal: his control of the MTA. He took a similar approach with his transformation of the old Farley Post Office into the Moynihan Train Station to relieve Penn Station’s overcrowding. He engineered that project through the state’s Empire State Development Corporation.

“It’s going to be a mecca as development occurs more and more on the West Side of Manhattan, especially from 34th Street South, that's going to be even more important,” said Moss.

Cuomo also converted the Erie Canal into a recreation space and put capital into the energy of the future, investing in wind generation off Long Island’s South Shore.

“There’s no question, for the 21st Century, Governor Cuomo's impact will be felt for the next 80 years,“ concluded Moss.