President Joe Biden speaks on the South Lawn of the White House in Washington, Thursday, Aug. 5, 2021, during an event on clean cars and trucks. (AP Photo/Susan Walsh)

President Joe Biden on Thursday signed an executive order that sets a goal that half of all new vehicles sold in the U.S. by 2030 will be zero-emissions, and he committed to reversing a Trump-era rollback of fuel emissions standards.

"We led in developing this technology. And there's no reason why we can't reclaim that leadership again. But we just have to move, we have to move fast," President Biden said, noting China's advances in the industry.

Biden made the announcement on the South Lawn of the White House flanked by representatives of Ford, General Motors and Stellantis, as well as members of the United Auto Workers (UAW).

He praised American potential and auto workers, calling them the part of the playbook that will help the U.S. compete with other nations.

"The American worker is our ace in the deck," he said. 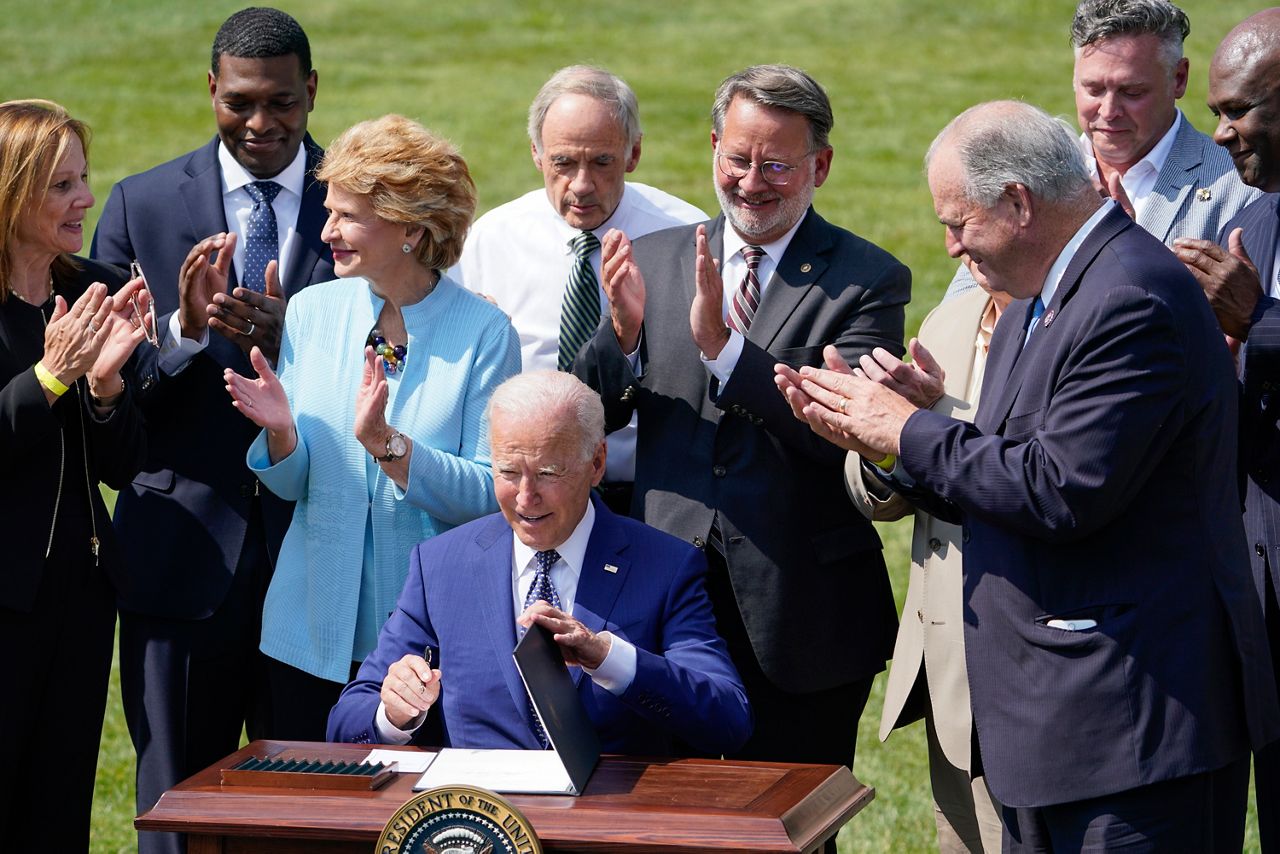 President Joe Biden signs an executive order on increasing production of electric vehicles after speaking on the South Lawn of the White House in Washington, Thursday, Aug. 5, 2021, during an event on clean cars and trucks. (AP Photo/Susan Walsh)

The president spoke from a White House with electric vehicles parked temporarily on the grounds, including a Ford F150 Lightning, Chevrolet Bolt EUV, Jeep Wrangler Limited Rubicon 4xE and a GMC Hummer EV.

"I have a commitment ... when they make the first electric Corvette, I get to drive it," the president said. "You think I'm kidding? I'm not kidding." 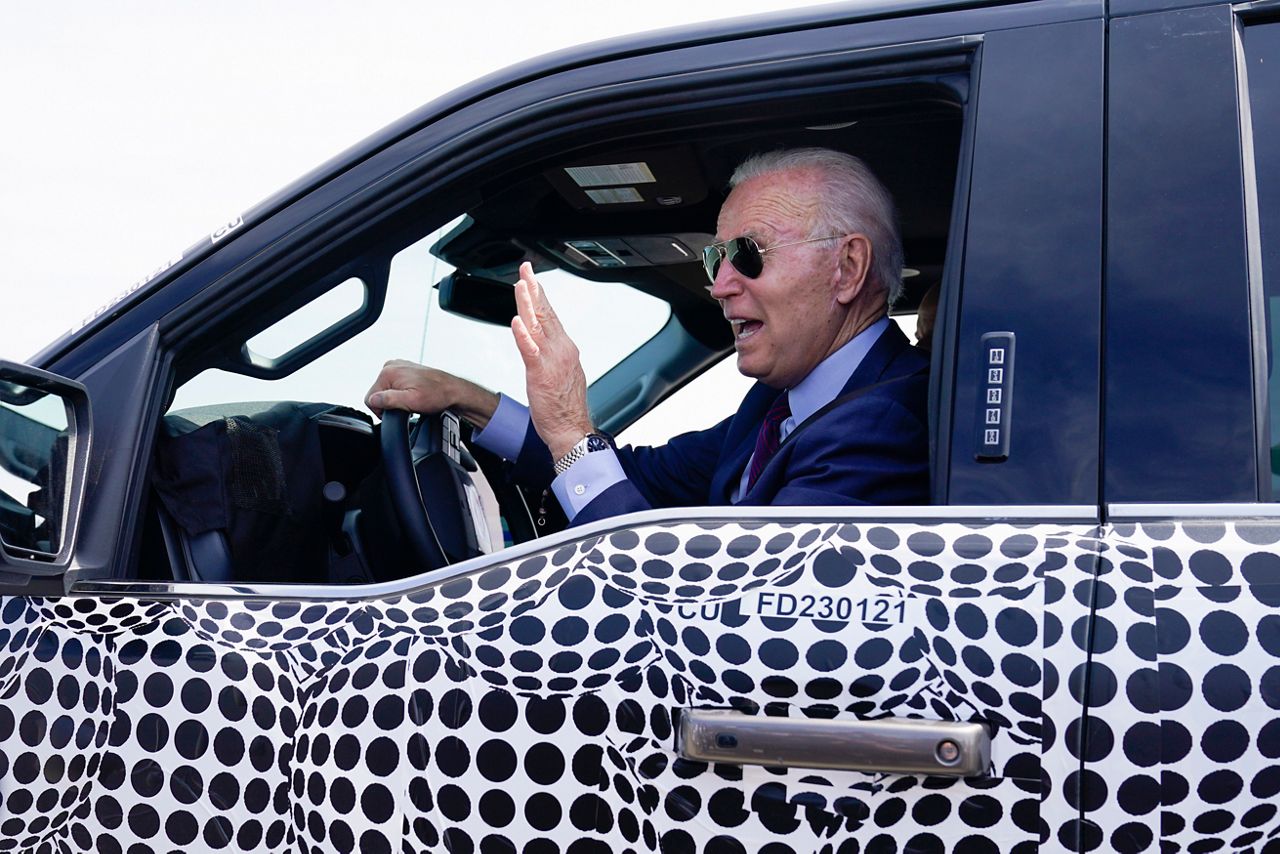 President Joe Biden stops to talk to the media as he drives a Ford F-150 Lightning truck at Ford Dearborn Development Center, Tuesday, May 18, 2021, in Dearborn, Mich. (AP Photo/Evan Vucci)

Following the White House announcement, the Environmental Protection Agency (EPA) and U.S. Department of Transportation (USDOT) were also expected to initiate the reversal of the previous administration's rollback of fuel emissions standards.

Former president Barack Obama had set a goal of new vehicles operating at more than 54 miles per gallon by 2026, but the Trump administration relaxed those requirements, bringing the new goal down to around 40 miles per gallon.

Biden also highlighted future goals of his domestic agenda and the potential to both create jobs and fight climate change, including through the bipartisan infrastructure bill moving through the Senate.

"We are proposing a blue collar blueprint to rebuild America," he said.

"When I hear climate, I think jobs, good paying union jobs," the president added. "If we act to save the planet, we can also come out of it better. We can create millions of good paying jobs and generate significant economic growth and opportunity."

In a joint statement released by the White House, Ford, GM and Stellantis announced their support for Biden's electric vehicle aspirations.

"Our recent product, technology, and investment announcements highlight our collective commitment to be leaders in the U.S. transition to electric vehicles," the companies said. "This represents a dramatic shift from the U.S. market today that can be achieved only with the timely deployment of the full suite of electrification policies committed to by the Administration in the Build Back Better Plan."

Ray Curry, the president of the UAW, also issued a statement of support: "We are at a critical time for the auto industry as countries compete to build the vehicles of the future. We are falling behind China and Europe as manufacturers pour billions into growing their markets and expanding their manufacturing. We need to make investments here in the United States."

"The members of the UAW, current and future, are ready to build these electric cars and trucks and the batteries that go in them," Curry wrote. "Our members are America's secret weapon in winning this global race."

Ford, GM and Stellantis also wrote: "We look forward to working with the Biden Administration, Congress and state and local governments to enact policies that will enable these ambitious objectives."

The president is also proposed new vehicle emissions standards to cut pollution on Thursday, similar to the strict standards enacted by California. The White House did not release specifics, but by 2026, the standards would be the most stringent federal greenhouse gas emissions figures in the nation's history, according to an administration fact sheet.

BMW, Ford, Honda, Volkswagen and Volvo, the automakers that reached the landmark California emissions standards in 2019, wrote in a joint statement that they "support the Administration’s goal of reaching an electric vehicle future and applaud President Biden’s leadership on reducing emissions and investing in critical infrastructure to achieve these reductions."

"We were proud to stand with California to establish progressive new greenhouse gas regulations, and we remain committed to leading the industry in fighting against climate change," they wrote.

Ford told investors at an event in May that it expects 40% of its worldwide sales to be battery-electric vehicles by 2030, and pledged to invest billions of dollars in EV development.