In a sign of returning to normalcy, President Joe Biden welcomed the Super Bowl-winning Tampa Bay Buccaneers to the White House on Tuesday.

“We’re making a pretty strong case to start calling Tampa the ‘City of Champions,’” Biden said as he welcomed the team to the White House, acknowledging their win and the Tampa Bay Lightning's recent Stanley Cup win.

The Bucs, who defeated the Chiefs 31-9 to win the Super Bowl in Feb., are the second team to visit the Biden White House since the 46th president took office in January. The reigning World Series champion Los Angeles Dodgers visited the White House earlier this month, the first team to do so since the COVID-19 pandemic struck last year.

"This Buccaneer team is a testament of the fact that it’s never too late to come together and achieve extraordinary things," Biden said in praise of the team. "Three-quarters of the way through the season they found themselves in the middle of the pack – seven wins and five losses. But this is a team that didn’t fold and always got up, dug deep."

Tuesday's event marked the first time a Super Bowl-winning team has visited the White House since 2017; the tradition of championship teams visiting the White House took place sporadically over the four years of the Trump administration.

The press and the team’s guests are gathered for the Buccaneers’ welcome at the White House: pic.twitter.com/MAhDIuwAaR

7x Super Bowl champion Tom Brady was spotted at the White House on Tuesday, posing for a photo with Commissioner Fried.

With the 🐐 at the @WhiteHouse. pic.twitter.com/3hgHI4yzNl

Labor Secretary Marty Walsh and National Climate Advisor Gina McCarthy — both from Boston and fans of Brady's former team, the New England Patriots — were also there.

Biden addressed the ages of Brady, 43, and head coach Bruce Arians, 68, drawing parallels to his own (78).

“You won't hear any jokes about that from me,” Biden said, adding: “As far as I'm concerned, there's nothing wrong with being the oldest guy to make it to the mountaintop.”

Brady praised his teammates for his record-shattering 7th Super Bowl win: “We love each other, we’re committed to one another and when you do that, amazing things happen.”

The legendary quarterback also cracked a number of jokes, including one seemingly at the expense of fraudulent claims about the 2020 presidential election.

“Not a lot of people think that we could have won," Brady said. "In fact, I think about 40% of people still don't think we won."

Biden replied: "I understand that."

Tom Brady to Biden: "Not a lot of people think we could win, in fact, 40 percent, still don't think we won. You understand that, Mr. President?" pic.twitter.com/3xEgSMHWtG

The team presented Biden with a Buccaneers jersey bearing the number "46" on the back. 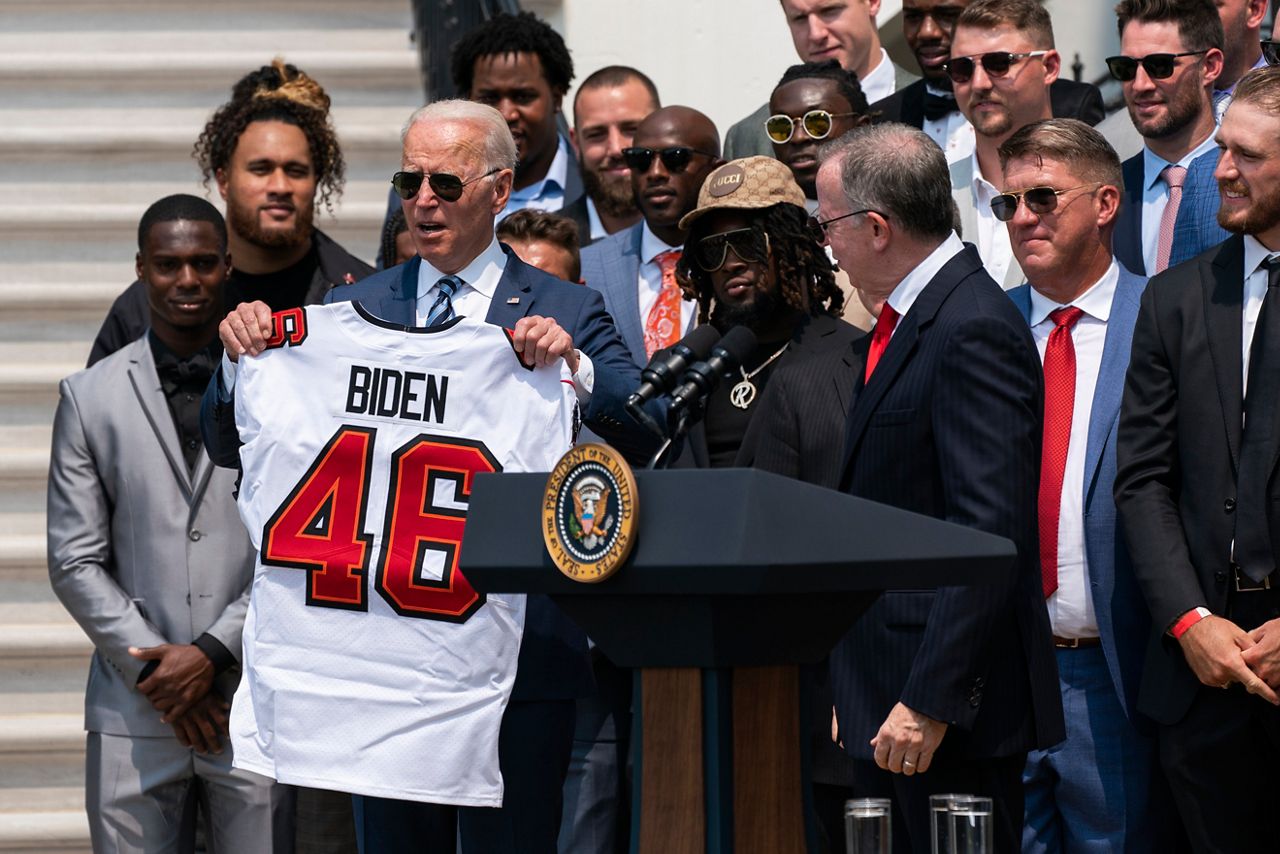 Head coach Bruce Arians told reporters after the event that it was "an honor" to be at the White House and that his team was an example of how people from different backgrounds can come together, noting the political divide in Washington.

Brady did not visit the Trump White House when the New England Patriots won the Super Bowl in 2017, the last time an NFL championship team visited the White House. 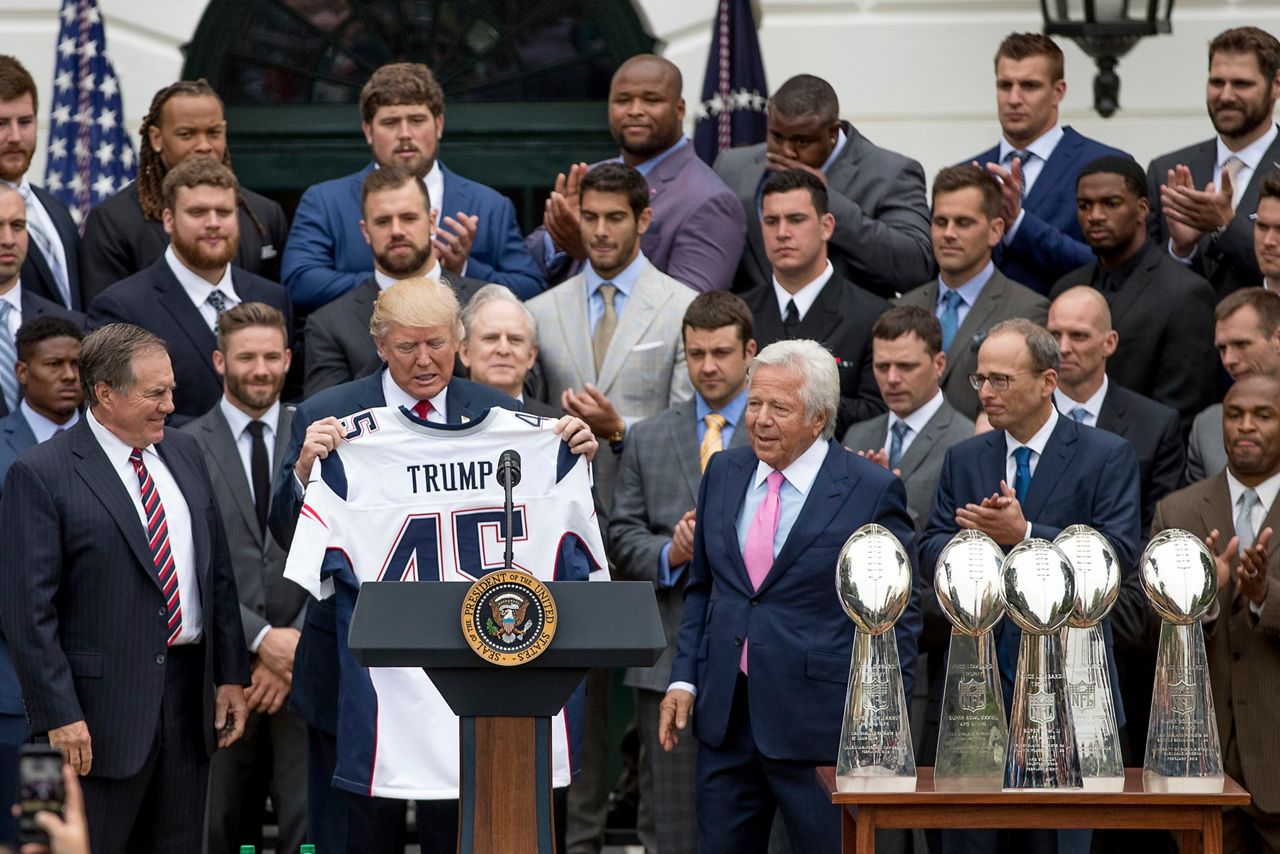 The 2018 Philadelphia Eagles were uninvited by former President Donald Trump, citing protests during the National Anthem.

"The Philadelphia Eagles are unable to come to the White House with their full team to be celebrated tomorrow," Trump said in a statement. “They disagree with their President because he insists that they proudly stand for the National Anthem, hand on heart, in honor of the great men and women of our military and the people of our country."

The Patriots did not visit the White House in 2019, both sides noting it had nothing to do with politics, and the Kansas City Chiefs did not visit in 2020 due to the COVID-19 pandemic.

Major League Baseball teams visited the Trump White House, including the Boston Red Sox, Washington Nationals and the Houston Astros, as did some college teams – most notably the Clemson Tigers football team, who were served fast food catered by the president, which he paid for himself, due to a government shutdown – and National Football League teams, including the New England Patriots.

Teams that won the National Basketball Association title, however, did not visit the Trump White House during his term, with the former president clashing with the likes of Los Angeles Lakers star LeBron James and Golden State Warriors head coach Steve Kerr.

The Biden administration is attempting to project a return to normalcy and the nation's emergence from the pandemic.

“Today, we celebrate your incredible achievement. We celebrate the great work you do on and off the field,” the president said, highlighting Dodger Stadium’s use as a COVID testing site, vaccination site and voting location.

“Above all, as we beat this pandemic and celebrate fans coming back to stadiums, we celebrate something else: a national achievement,” he added.

The team presented Biden a Dodgers jersey with the number '46' for his place in the line of presidents and a number '49' jersey to Vice President Kamala Harris, who is from California but is a San Francisco Giants fan.

"Our hope was that we were able to provide just a little bit of joy and comfort and relief to our fans are going through some tough times," said Clayton Kershaw, the Dodgers' starting pitcher, who presented Biden with the jersey. "This season, it's been incredible to have fans back in the ballpark. We miss their energy and their passion for the game."