Absentee ballots are seen in a sealed ballot box during early voting in the primary election, Monday, June 14, 2021, in SoHo. (AP Photo/Mary Altaffer)

How important are absentee ballots? They ‘will decide the race’

With in-person ranked-choice votes already tabulated, all attention has turned to absentee ballots in the New York City Democratic mayoral primary, specifically the 125,000 or so that are currently being counted around the city.

The latest simulated vote count, run without those absentee ballots, puts Eric Adams just ahead of Kathryn Garcia, with Maya Wiley a few hundred votes behind her.

Typically, absentee ballots would not play a sizable role in an election. But the pandemic led to a surge in requests for them, and with the margins already extremely tight among the top three candidates, counting the absentees has never been more important.

“It will decide the race,” Steven Romalewski, the director of the CUNY Mapping Service and an expert on election data. “The absentee ballots will be absolutely crucial.”

According to the simulated ranked-choice tally released Wednesday, the final round shows Adams with 51.1% of the vote, followed by Garcia with 48.9%. Wiley trailed Garcia in the penultimate round by just 347 votes.

While we don’t know what the absentee votes contain, we know where they came from.

Among the top three finishers in the race, state Assembly districts won by Adams account for just over half of all the absentee ballots returned in this primary, according to an NY1 analysis of current absentee ballot data. The results of absentee ballot count are expected next week. 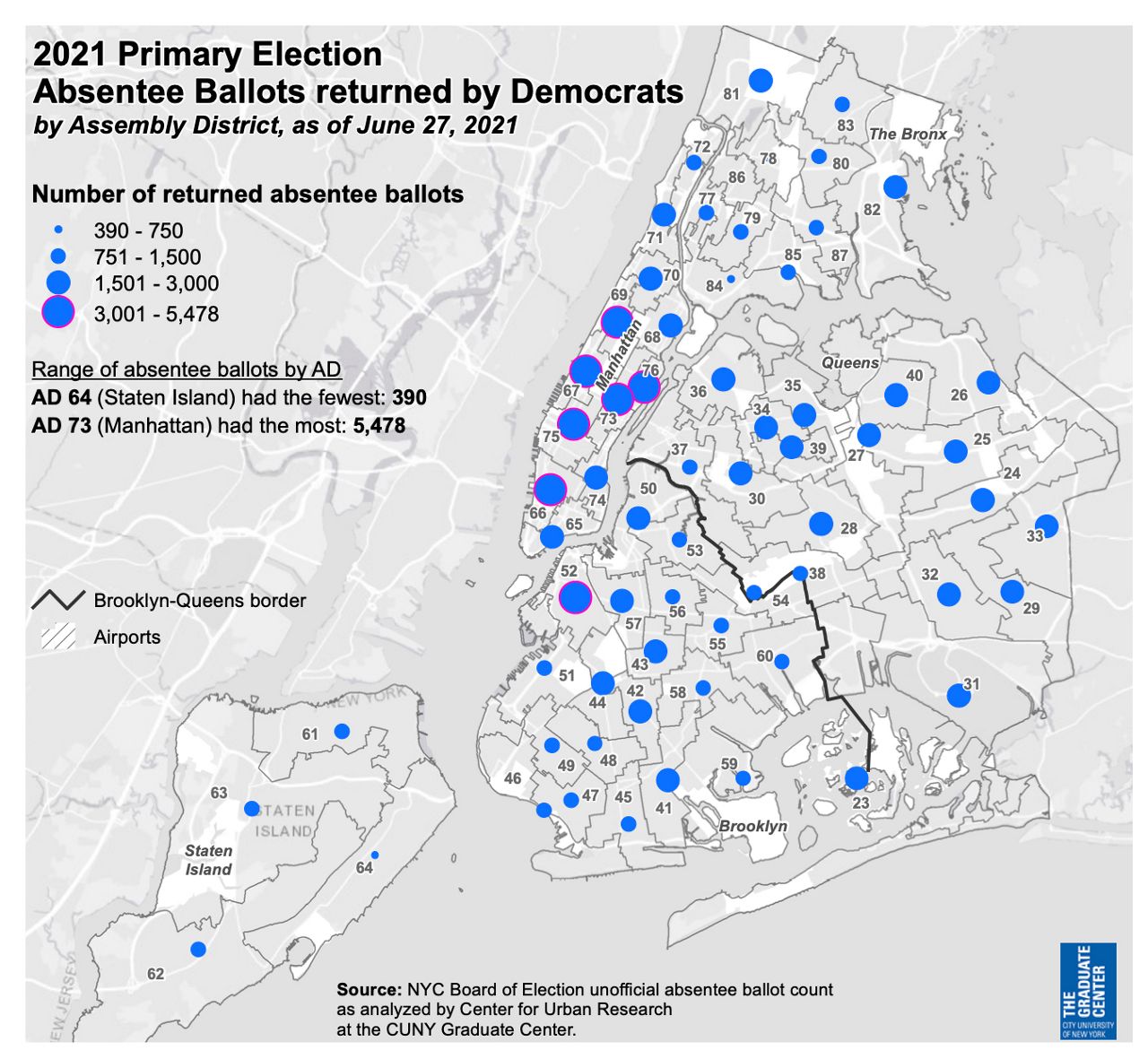 A map showing which state Assembly districts returned the most absentee ballots for the Democratic primary. (Credit: Center for Urban Research at the CUNY Graduate Center)

This analysis does not include other candidates in the race, although Andrew Yang, the fourth-place finisher, picked up three districts in Queens, three in Brooklyn and one in Manhattan. Yang, who has conceded the race, urged his supporters to rank Garcia second, and so far about a third of in-person Yang voters citywide have done so, while a slightly smaller proportion ranked Adams second. Preliminary Tally Shows Yang and Wiley Voters Breaking for Garcia

Garcia performed the best in Manhattan, winning in every Assembly district that returned a large number of absentee ballots, such as those covering the Upper East Side, the Upper West Side, Hell's Kitchen and the Lincoln Center area.

But Adams won Manhattan’s northern districts, swept the Bronx and won most of Queens, including districts that returned relatively high numbers of absentee ballots for the borough.

Garcia split Staten Island with Adams and won the two districts in Queens that returned the most absentee ballots: the 26th, covering Bay Terrace and Beechhurst, and the 28th, covering Middle Village and Forest Hills.

Although Wiley won just four fewer total districts than Garcia — 10 to Garcia’s 14 — those districts accounted for less than half of the number of absentee ballots that Garcia’s districts returned. That’s because Garcia won in dense Manhattan neighborhoods that in some cases returned two, three or four times as many absentee ballots as outer borough districts.

Assuming the absentee ballots break down the same way as in-person votes, Adams has a clearer path to victory than Garcia.

On Thursday, Adams’ campaign sent an email about their internal analyses of absentee votes claiming as much, and suggesting that Adams even has enough breathing room to win the remaining absentee ballots at a lesser rate than he won in-person votes and still take the primary.

Yet recent elections have shown that absentee ballots can both decide a race and deviate dramatically from the in-person vote, Romalewski said.

In last year’s Democratic primary for the state Assembly in Williamsburg and Greenpoint, he said, the northern part of the district returned a large number of absentee ballots for Emily Gallagher, while the southern part of the district — the stronghold of incumbent Joe Lentol — returned almost no absentee ballots. Gallagher won in an unexpected upset.

There are several other assumptions that political observers are considering ahead of the final count of absentee ballots.

In the ranked-choice count of in-person ballots, Wiley voters overwhelmingly chose Garcia as their No. 2 pick. If Garcia manages to edge out Wiley into the final round of the ranked-choice process — a big ‘if,’ since they are only separated by a few hundred votes — she would need to pick up a large proportion of Wiley voters’ second-choice spots.

Another unknown, as of now, Romalewski said, is how many more “exhausted” ballots we will see — ballots where the voter did not make picks for all five available slots. With a race this close, the proportion of exhausted ballots could have a stark effect on how close either Garcia or Wiley gets to Adams.

Information on the behavior of absentee voters in ranked-choice systems is slim, Romalewski said, despite the consequential effect it could have on one of New York City’s most important mayoral elections in its history.

“Maybe they had more time, or are voting from the comfort of their own home, and were able to fill out the ballot more,” he said. “Or maybe they were confused, and didn’t have a poll worker to talk to, and so they only picked one.”