Organizers of the Queer Liberation March spoke out Tuesday against the NYPD for what they said were unprovoked attacks last weekend at Washington Square Park.

Eight arrests were made Sunday night following clashes between the NYPD and demonstrators after the march.

Four of the arrests involved assaults against officers, including a 23-year-old who bit a lieutenant, police said.

March organizers said that cops initially pepper-sprayed the crowd and then used the arrests of those four individuals as a reason to attack bystanders in the park.

“By attacking a small group of people who were standing on the east sidewalk of Fifth Avenue, they hoped that the rest of the crowd would become enraged and violent and that would give them an excuse to commit more atrocious violence,” said Jay W. Walker, a co-founder of the Queer Liberation March, which is billed as an alternative to the city's main Pride march without police participation or corporate sponsors.

“The events that transpired Sunday night at the north end of this park [were] militarized agents of the state attacking queer and trans black people,” Ash Tifa, an organizer with the march, said about officers who were on the scene in riot gear.

One of the people arrested, Dan Alvin, 29, said he came out to the park after two weeks of protesting against police brutality, including specific calls for the NYPD to fire one of its officers, who witnesses said flashed his gun on non-violent marchers in January.

“I literally just came to have a good time — only to find out the NYPD decided to pepper spray a bunch of people including my friends,” said Alvin, who said officers put a knee to his back. “All I wanted to do was my civic duty of recording the police officers who were involved. They didn't like that and I was beat up.” 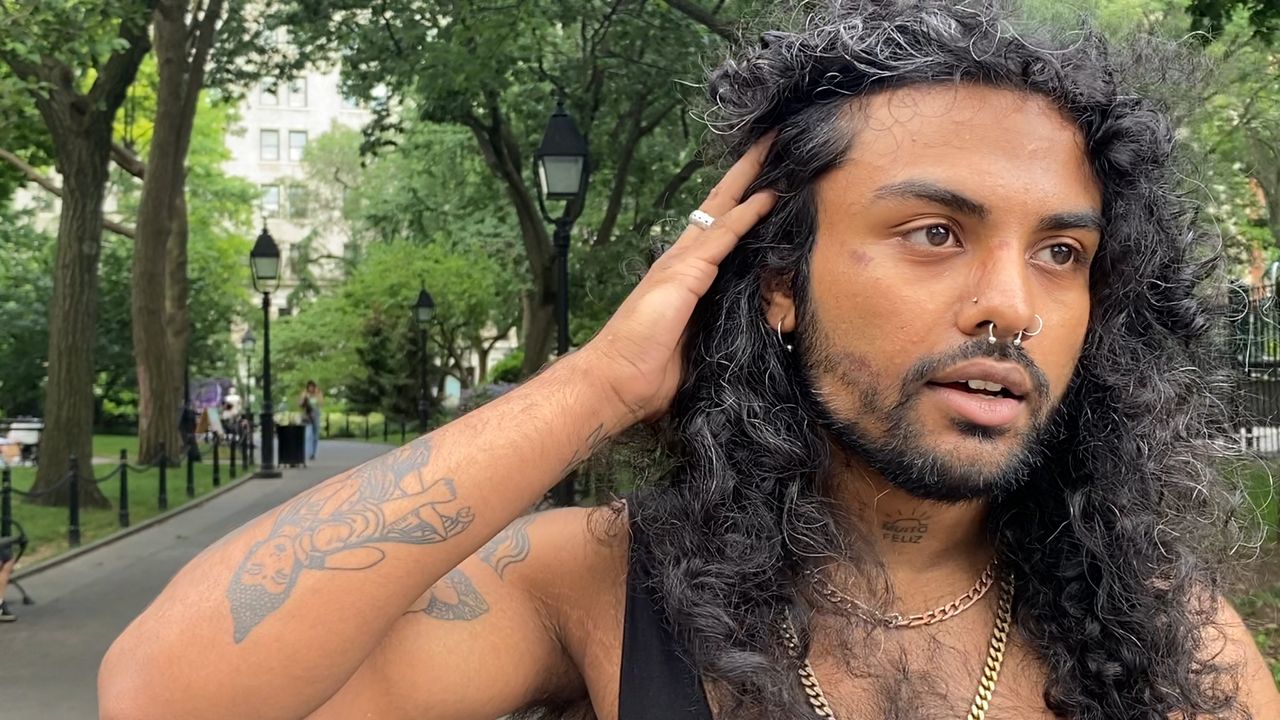 Dan Alvin showing bruises on his face that he said were from his altercation with the police on Sunday. NY1/Anna Lucente Sterling.

Alvin was charged with resisting arrest, obstructing governmental administration and disorderly conduct, according to officials. His belongings, including his cellphone, were taken by officers and have not been returned, he said.

The NYPD did not immediately respond to a request for comment regarding allegations of unprovoked attacks.

Organizers also called out the NYPD’s Strategic Response Group, a division within the Special Operations Bureau tasked with responding to terrorist incidents and other citywide emergencies, for creating what they called their own “personal warzone” in Greenwich Village.

“We were not here to fight with cops,” said Tifa, who was a safety marshal at the march on Sunday. “We want to be able to celebrate our lives without their presence because we know this is what they do.”

They called on the city to reduce the NYPD budget; for the state to end qualified immunity, a legal doctrine shielding police officers from personal liability in cases of misconduct; and to end lobbying power by the Police Benevolent Association, the police union, in elections.

The Queer Liberation March, which held its first march in 2019, began when organizers within the city’s main Pride organization, Heritage of Pride, said their concerns regarding the outsized corporate influence on the annual march and the increased police participation were going unheard.

In May, Heritage of Pride announced that the NYPD would be banned from participating in the parade, despite dissension from the membership’s ranks.

The conflict between the organization’s board and its membership led André Thomas, the first Black co-chair of the group, to temporarily leave from his position.

Thomas hopes Sunday’s clash between the NYPD and demonstrators, which also occurred in 2020, will change people’s minds about police participation in the annual celebration.

“I think it does show some people now that, ‘Hey, this is why we did what we did’ and not just necessarily the membership,” said Thomas, co-chair of Heritage of Pride. “Some people in the greater community who might have not understood or might not even realize some of these events had happened last year — well, now here we are again.”