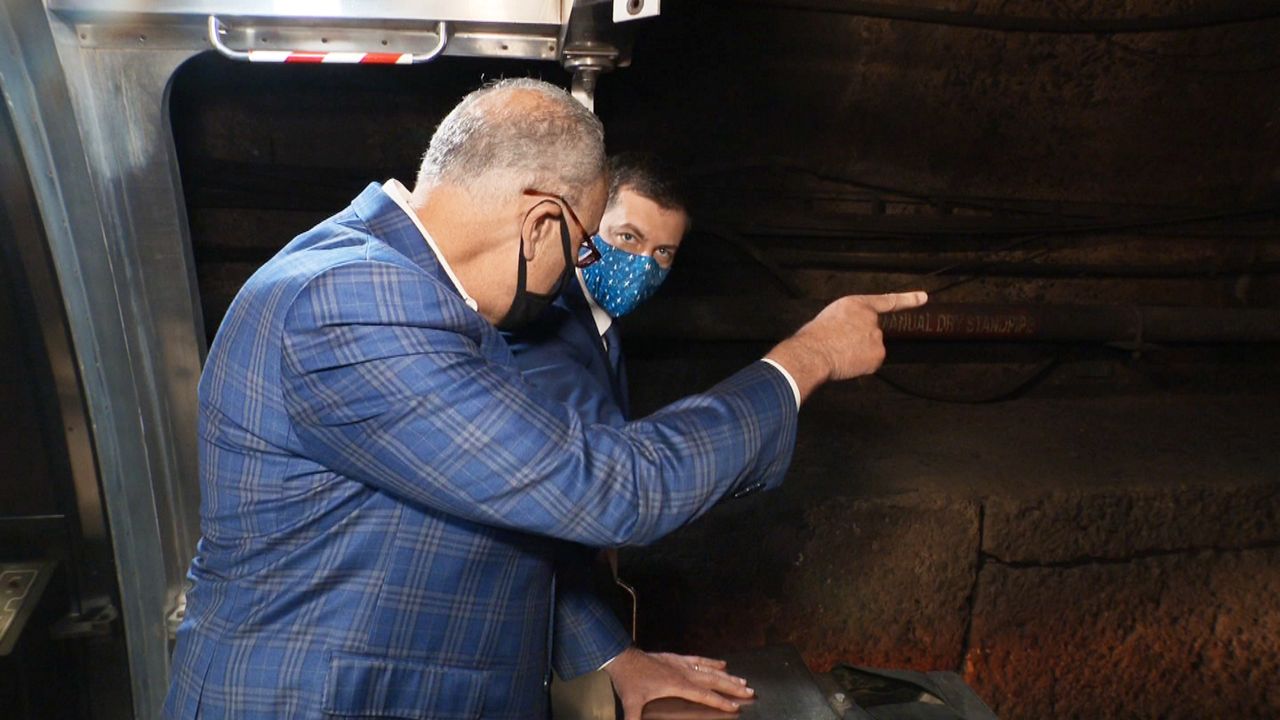 NEW YORK — The Gateway Tunnel on Monday got a new name of sorts from Sen. Charles Schumer.

"What we call our visit today and subsequent actions," Schumer said at Penn Station, "is the gateway turnaround."

Schumer praised the turnaround from the Trump administration, which had held up a plan to construct new tunnels between New York and New Jersey.

Schumer was joined by U.S. Transportation Secretary Pete Buttigieg, who saw the deteriorating tunnel up close during a tour.

"You go into the tunnel and you look up and you see the concrete spalling, you can start to see some of the rebar exposed underneath," Buttigieg said. "You can see the consequence of seawater coming in, accelerated by Superstorm Sandy and further degrading the infrastructure."

The age of the tunnel and the equipment have led to increasingly frequent delays for commuters.

"This stuff runs through concrete casing," Buttigieg said, holding a frayed cable. "The entire technology is severely outdated. Pieces of it can literally blow."

Under the Biden Administration, the Gateway tunnel Project has already received key approvals.

It could cost more than $11 billion to construct a new tunnel. Afterwards, Amtrak would use it while the existing tunnel is repaired.

Schumer and New Jersey lawmakers vowed to put up half of the money on behalf of the federal government with Secretary Buttigieg, cutting the red tape.

But there may be another hurdle.

Gov. Andrew Cuomo, who had championed the project, is now suggesting Amtrak do what he did with the L train tunnel - repair the old tunnel under the Hudson River tunnel on nights and weekends.

"They want to completely rip out everything in the tunnels and do a complete rebuild," said Joseph Clift, a former Long Island Rail Road planning director and critic of Amtrak's proposal. "MTA proved on the L train tunnels you don’t have to do that if you do it now, you do it nights and weekends. You fix the problems, you don’t tear the whole house down and rebuild it."

“It is imperative that we use our state funds in a cost effective manner to do as much work as possible," Cuomo said in a statement, adding that New York has other pressing needs like the Second Avenue subway in Harlem and a congestion pricing tolling system in Manhattan.

Secretary Buttigieg said he’d talk through any concerns about spending with local officials.