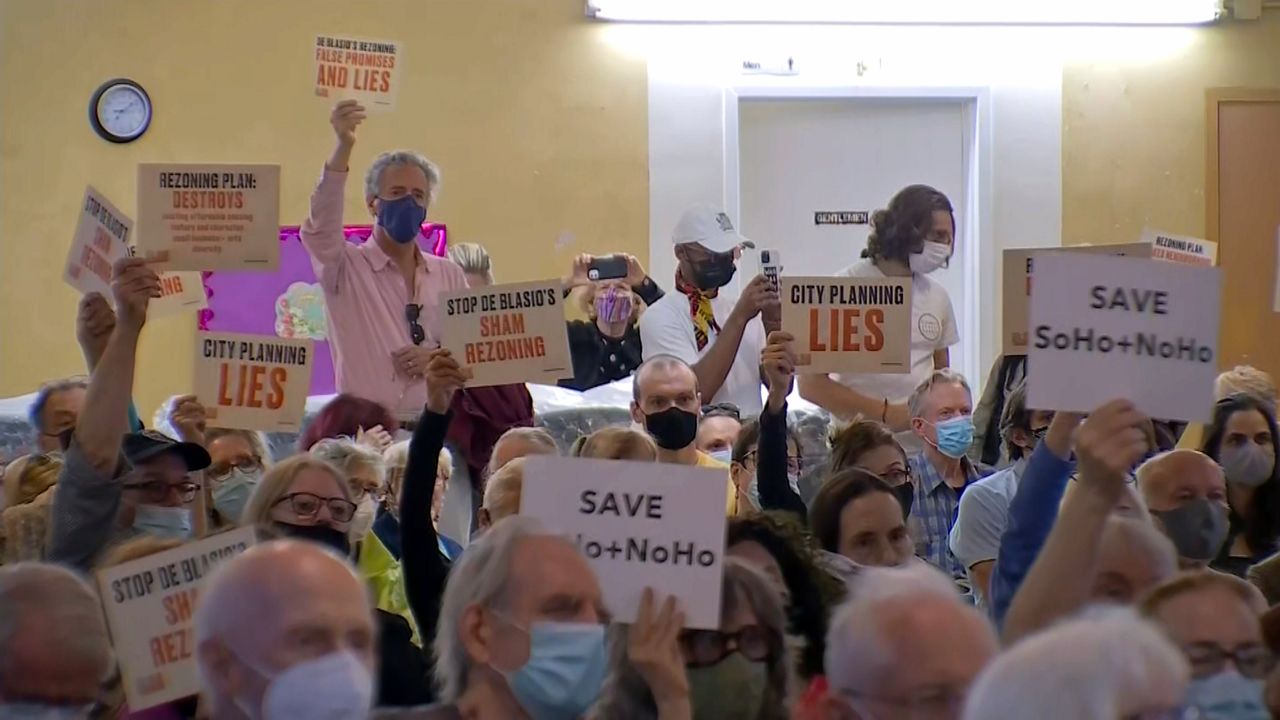 NEW YORK — Residents who attended a public hearing in Lower Manhattan on Wednesday didn’t have to say a word. Many of the roughly 200 community members who showed up for the hearing, on a proposed rezoning of SoHo and NoHo, brought signs that listed various reasons for why the oppose the plan.


Still, dozens of those in attendance spoke their mind.

There were a number of attendees who didn’t want to wait until the public comment period and booed those leading the presentation on the proposed plan.

At several times during the meeting, community board members tried to control the uproar and asked residents to hold their comments until the testimony portion of the meeting.

Still, over and over, a presentation by a NYC Department of City Planning representative was interrupted and at times inaudible.

The meeting was was the first opportunity for community members to speak out about the plan, in person, since the pandemic began.

Several attendees told NY1 just prior to the meeting that they wanted to make it crystal clear that they don’t support the proposal.

“The plan that’s being put forth by the de Blasio administration really does not guarantee any amount of affordable housing,” said Peter Von Mayrhauser, who has lived in neighborhood for the last 44 years.

However, the city maintains that creating more affordable housing is just one of their goals in rezoning these neighborhoods.

”SoHo and NoHo are among the most expensive and least diverse communities in New York City," said Joe Marvilli, deputy press secretary at the NYC Department of City Planning. "This plan promises to bring affordable homes to these central historic communities — ones that are protected by landmark laws but that desperately need modern zoning to open them up to lower income families and struggling small businesses."

According to city data, the SoHo and NoHo neighborhoods are among the most expensive and least diverse in city.

Officials also maintain, that despite community sentiment that they’ve been left out of the planning process, that they are actually still seeking community input on the plan.

“This is part of the public process. We’re here to hear it all. Opinions, questions, and input, we welcome all of it,” said Edith Hsu-Chen, the director of the Manhattan office at the NYC Department of City Planning.

Opponents, however, came prepared for a fight and gathered a half hour before the meeting for a press conference to highlight their concerns.

“We think it’s a sham. It’s a terrible idea, not just for the neighborhoods but for New York City. We want to encourage the community board, all of our elected officials and city leaders to oppose it,” said Andrew Berman, the executive director of Village Preservation.

A major point of contention for some opponents is an implication that all residents in SoHo and NoHo are ultra wealthy.

One of those residents is Harry Pincus, an artist who moved into the neighborhood 46 years ago when it was not a desirable place to live.

“[The Mayor] has the temerity, the nerve to tell me that my family, my children can’t live in the house that I struggled for, for 46 years? I sanded those floors three times! I painted them five times,” said
Pincus who fears that the rezoning will push him and others like him out of the neighborhood.

Some community members who oppose the plan also allege that they were not a part of creating the proposal as it currently stands.

They said that it’s been replaced with one that would actually benefit real estate developers over New York City residents.

City officials said that plan’s primary goal is to provide NYC residents with more affordable housing and argue they’ve made painstaking efforts to include them in developing the plan.

“Starting in 2019 we had a very intensive public engagement process, 6 months of meeting and workshops and a report was developed. That report was also shared with the public,” said Hsu-Chen.

There will be a second public hearing on the proposal, conducted via Zoom at 6:30 p.m. on Thursday, July 23.