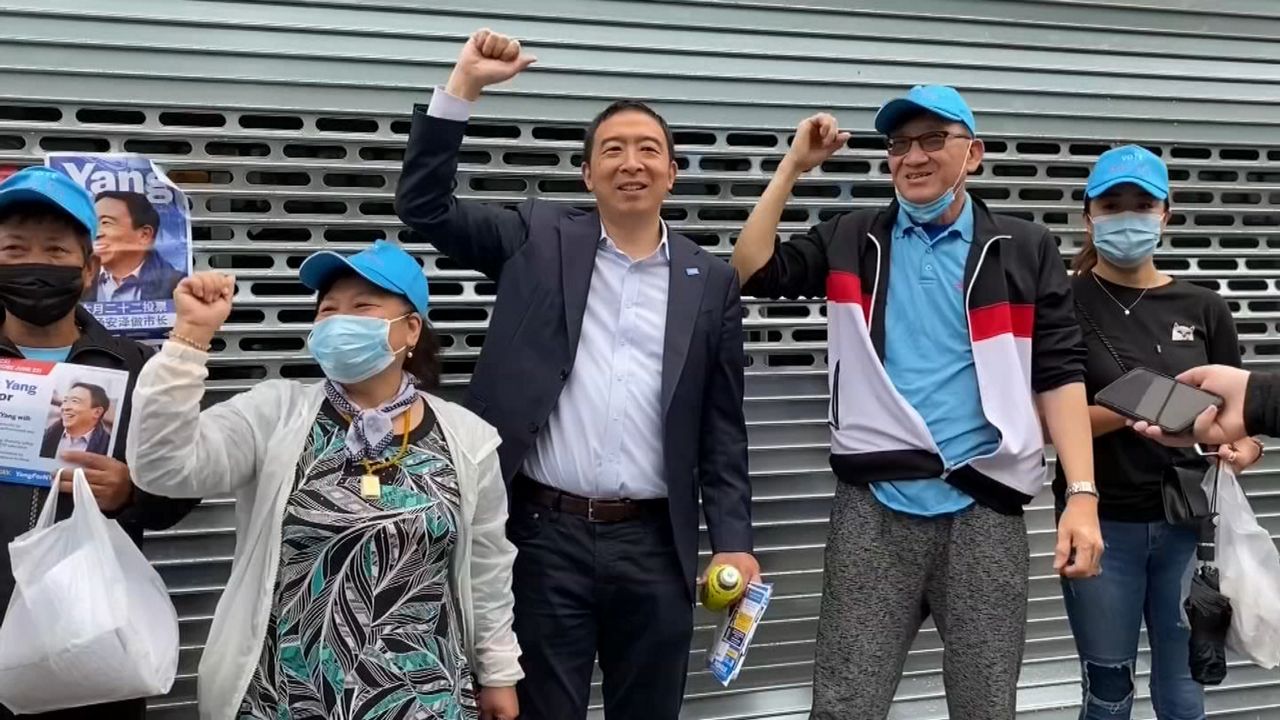 “I want you to imagine millions from around the world flying into JFK Airport and the message that will greet them will say, ‘Welcome to New York City, Mayor Andrew Yang,’” the mayoral candidate said Sunday in Chinatown. “Think about what that will mean for Asian-Americans here in New York and people around the world.”

His closing message also features frequent reminders of the historic nature of his candidacy.

If elected, Yang would the city’s first mayor of Asian descent.

“I told John he is the trailblazer of our community and it will be my honor to finish the job that John Liu started," Yang said at an AAPI Democracy Project rally.

"Get it done, Andrew! Get it done!” cheered Liu, the state senator who ran for mayor in 2013 and as comptroller was New York's first citywide official of Asian descent.

Accompanied in recent days by high-profile endorsers like Liu and Congresswoman Grace Meng, Yang has made regular stops in Chinatown and Flushing.

His volunteers are out in force.

“If you were to walk on the streets of Chinatown a month ago, they might not know it," Ching Juhl, who canvassed in the neighborhood Sunday, said of Yang running for mayor. "So I just think right now, people are more aware.”

Yang’s flagging performance in the polls means he can’t take any vote for granted.

How the son of Taiwanese immigrants wields his AAPI identity has evolved from stereotypes when he ran for president to vulnerability during his mayoral bid as he discussed anti-Asian bias.

At a September 2019 presidential debate, he had said, “I am Asian, so I know a lot of doctors."

This past March, he recalled that as a young person he had “a sense that you cannot be American if you have an Asian face.”

Yang has had a new chance to discuss his background thanks to Eric Adams’ remarks that Yang’s alliance with Kathryn Garcia seeks to block a "person of color" from being mayor.

“I’ve been Asian all my life" was Yang's response.

And Yang’s Asian-American base could help Garcia, whose support among non-white New Yorkers isn’t strong.

On Sunday from the rally stage in Chinatown, Yang’s message that his backers should rank Garcia second on their ballots was translated in real time into Mandarin.