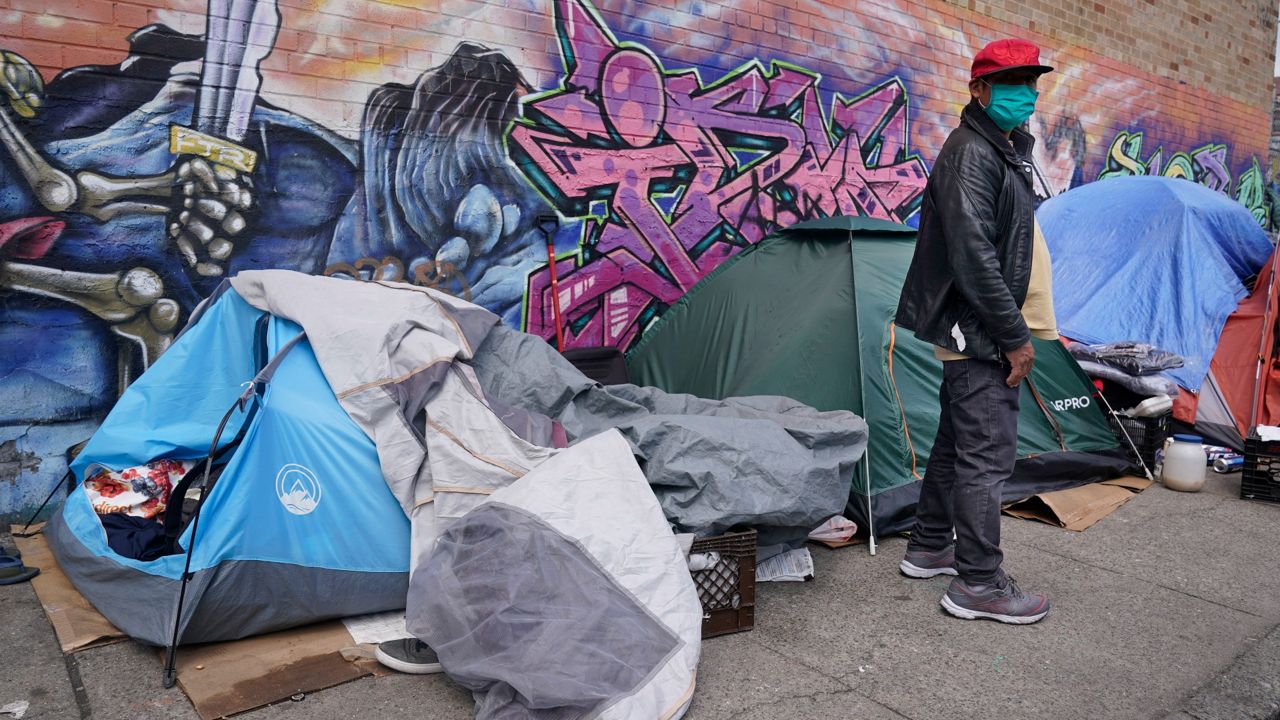 Sotero Cirilo stands near the tent, left, where he sleeps next to other homeless people in the Queens borough of New York, Wednesday, April 14, 2021. (AP Photo/Seth Wenig)

NEW YORK — The city intends to move thousands of homeless New Yorkers who have been staying in hotels back into shelters, Mayor Bill de Blasio announced on Wednesday.

Shelter residents were moved to hotels temporarily to accommodate social-distancing requirements during the COVID-19 pandemic.

“It is time to move homeless folks who were in hotels for a temporary period of time back to shelters where they can get the support they need,” de Blasio said at a news conference.

The mayor said the Department of Social Services (DSS) requested approval for the move on May 18. But a source within the Cuomo administration told NY1 in the evening that no explicit approval was needed from the state for the city to transition back to congregate shelters, but shelter residents have to wear masks. The city's Department of Social Services (DSS) said returning to shelters will take time but will be done at the end of July.

The announcement comes after the state on Tuesday lifted most COVID-19 restrictions in New York.

In the Department of Social Services and Department of Homeless Services (DHS) systems — which are under the same umbrella — nearly 13,000 people are fully vaccinated against COVID-19, according to DSS, and about 6,300 of those people are clients.

The move back to shelters would impact 9,000 New Yorkers who are living in 60 hotels across the city.

The hotel program has created tensions in neighborhoods like the Upper West Side. Residents there battled the city over the placement of homeless residents in the Lucerne Hotel.

‘A night at a shelter is a night in hell’

Marcos Sanchez says living in the Hotel Belleclaire on the Upper West Side has been a blessing. He was transferred from a shelter into the hotel during the coronavirus pandemic, and says he feels safer in the hotel.

“A night at a shelter is a night in hell,” Sanchez said. “And then I came to the hotel and I have a full size bed to myself, a comfortable bed.”

But soon Sanchez will have to move back into a shelter as the city phases out the temporary hotels program.

The Coalition for the Homeless criticized the mayor's announcement, saying homeless New Yorkers should remain in hotels for now.

“The pandemic is not over," Giselle Routhier, the group's policy director, said in a statement. "There are people sleeping in shelters who are still testing positive and getting sick. Until permanent affordable housing can be secured, the safest option remains placement in hotel rooms. With the dangerous Delta variant on the rise and vaccination rates still not high enough, now is no time to let our guard down. Despite Mayor de Blasio's comments, it is simply inaccurate to say that people aren’t getting services in hotels. It is unconscionable to guide homeless policy by the discomfort of housed New Yorkers, especially when lives are on the line."

Sanchez says there’s more stability at the hotel, and he is not looking forward to going back to the shelter.

“There was a lot of violence, I had a couple of encounters where I’ve gotten into fights,” he said. “There’s always something going on in those places.”