The sun is partially eclipsed as it rises over Lower Manhattan in New York, Thursday, June 10, 2021. (AP Photo/Seth Wenig)

What the 'Ring of Fire' solar eclipse looked like from NYC

NEW YORK — The "Ring of Fire" eclipse was the celestial event to be seen Thursday morning over the city's skies.

Early risers like David Shepherd came to gaze at the northeast sky on Randall’s Island to see it.

“There’s enough of a cloud layer that if you don’t stare at it for too long, take a quick glance you can see it quite well,” he noted. 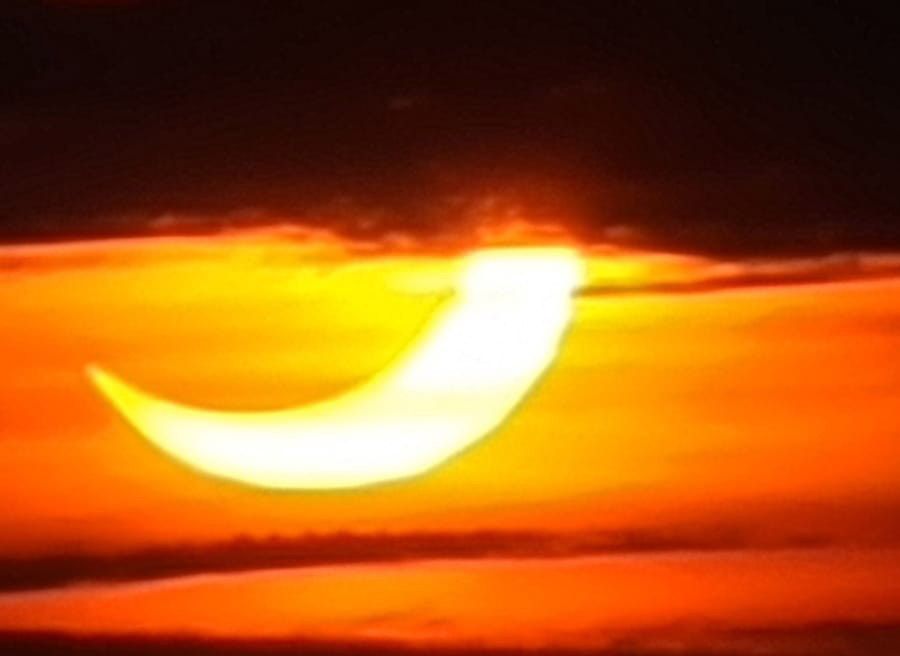 The celestial event, known as an annular solar eclipse, happens when the moon crosses in front of the sun. Because it appears smaller, covering only 73 percent of the sun, it can often resemble a so-called ring of fire.

From my vantage point, with protective eye glasses of course, it looked like a crescent.

Amateur astronomers chose Randall’s Island because you can clearly see the horizon when the peak of the eclipse occurred around 5:30 a.m. Some also watched from the top of buildings or bridges, as other parts of the city have blocked views.

Clouds did block some of the vantage points. Still, people like Elizabeth Flachbart were excited to witness the event. Her mom works for NASA so astronomy runs in the family.

“I’m here for college so it’s kind of a way to connect back to Home,” she said.

“I literally teared from looking at it,” Ivette Pagan said.

It was a memorable moment for the Pagans too.

“Today’s our anniversary so it was really special today, 21 years together right honey?” said Alex Pagan.

If you missed this eclipse, you have a few more years to prepare for the next time it is visible in the northeast, there will be a total eclipse in spring of 2024.