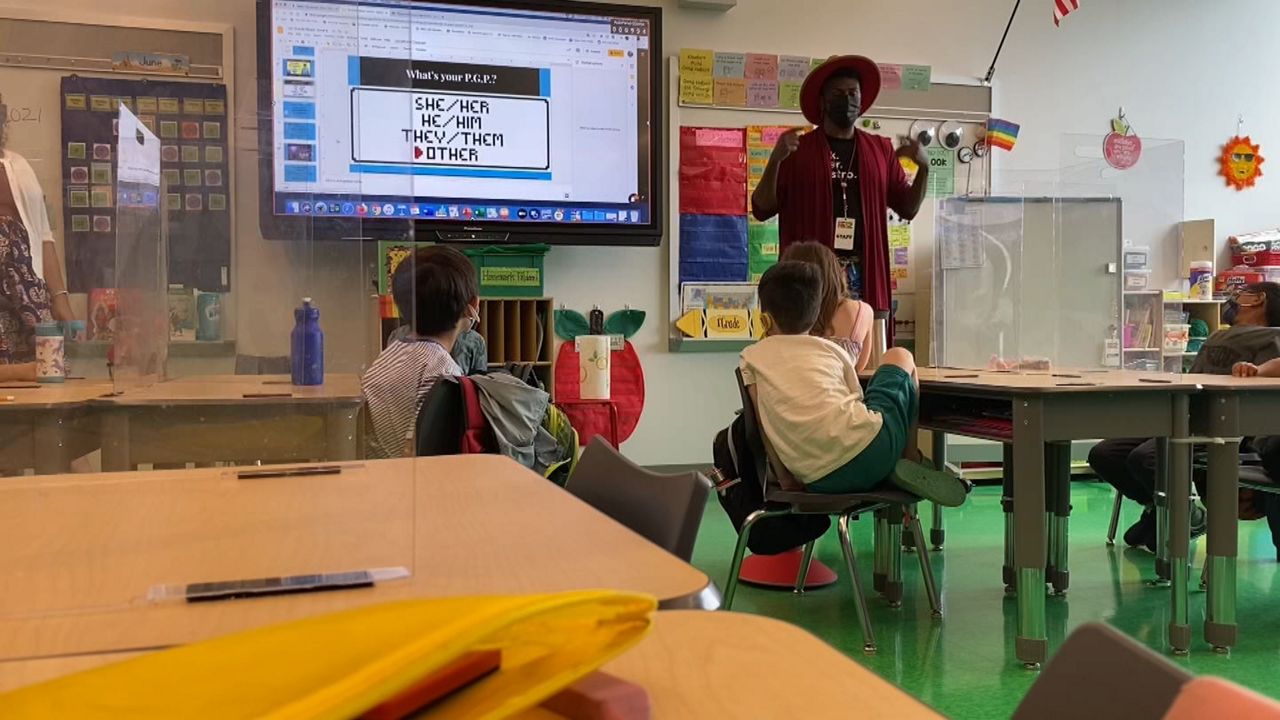 “We are a family and you get to express yourself however you want,” he told the class.

“Preferred gender pronouns! Or, for short, PGP,” he told the students.

“Many students know who they are, but they don’t know how to express themselves, so preferred gender pronouns just provided me an opportunity to give them tools, the language, the words to use,” Williamson told NY1.

The lesson, complete with a cameo from Schools Chancellor Meisha Porter, was straightforward. The students learn about the pronouns people might like to be called — he/him, she/her, they/them, or maybe something else. The lesson focuses on respecting one another’s preferences and communicating their own.

The students weren’t shy and for most the subject matter isn’t new. One child said their pronouns depend on how they’re feeling, but today, they’d like to be called they.

“It’s not who we are on the outside, it’s how you feel on the inside,” they said.

“Yes, silent round of applause, that was beautiful,” Williamson responded.

Williamson chairs the school’s equity and diversity committee and said, at times, there has been pushback to these efforts. But he said there are age-appropriate ways to discuss gender identity with students.

“Kids understand fairness, they understand respect, so if you’re not ready to talk about sexuality or transitioning or trans, you can just talk about: this is who I am, how do you see yourself?” Williamson said.

Asked what she’d say to anyone worried first graders might be a little young for a lesson on gender pronouns, Porter said some of those same students may be working through their own identity.

“We have young people who are grappling with who they are and it’s important for us to teach tolerance. We know that, more than anything, in these days and times that we’re living in, you’re never too young to learn to appreciate, respect and engage in behaviors that demonstrate your tolerance for other people,” she said. “We teach our babies to do that, so there’s no grade in which they’re too young to teach folks how to be tolerant and how to honor and respect each other’s differences.”

And this being a music class, they don’t just discuss the pronouns, they sang about them.

“I am a proud gay Black male educator. I mean, I wear Black Queer Maestro on my shirt. It’s important that they see themselves, that they see people who don’t have their same experience, so they can learn to respect, love and value each other — because hate is taught,” Williamson said.

Not in his classroom.