Shortly after 10 p.m. — the time of a recently instituted curfew — police officers in riot gear marched south from the stone arch

Krahne said she and her group of friends, fresh off a small, unrelated protest, initially linked arms and walked backward in a line, facing the officers.

“Then they pulled me forward and threw me face forward on the ground, and probably five or six cops jumped on top of me,” she said.

The main warning given before police entered the area, Krahne said, was a loudspeaker announcement that the park was closed, which she thought was not enough warning for people enjoying one of the city’s most visited parks.

“It’s a beautiful Saturday night in June,” she said. “They certainly wouldn't think that they were about to be brutalized in 30 seconds.”

Krahne was one of 23 people arrested in the ensuing enforcement action, the highest intensity moment so far in an ongoing struggle between area residents who would like to see the park quieter, calmer and safer, and the musicians, dancers, skaters, students and summer sweethearts who want the iconic public square to retain its raucous summer vibe.

Videos of the scene posted to social media showed instances of use of force that included people getting maced, tazed, tackled and hit with police bicycles and batons.

After cops shut down the Washington Square Park arresting multiple people who refused to disperse, they chased remaining crowd through West Village. People ran through restaurants and streets, cops chased and arrested them.

Yet 24 hours later, on Sunday night, the NYPD took no enforcement action at 10 p.m., prompting confusion from those who support curfew efforts.

“If you’re going to make a rule, stick to it,” said Erika Sumner, a board member of the Washington Square Association and whose townhouse stoop faces the park. “We would definitely like to understand more about why the police are deploying their resources the way that they are. The way that it’s being handled is antagonizing the folks.”

In an emailed statement, a representative for the NYPD said that the lack of police presence Sunday night “reflected a marked improvement to the disruptive conduct in the park and highlights the department’s flexibility to dynamic circumstances as they unfold.”

The representative said that eight officers saw minor injuries during the curfew enforcement.

Washington Square Park was one of a handful of city parks that were closed abruptly Saturday night, in some instances with no prior warning. The parks have long had midnight closures, though they are not typically enforced. Washington Square Park’s current 10 p.m. curfew is set for Friday, Saturday and Sunday.

At 10 p.m. Saturday, police also sealed off Tompkins Square Park and Union Square in Manhattan, and closed Crotona Park in the Bronx, and Coffey Park in Brooklyn.

At a Monday morning news conference, Mayor Bill de Blasio called the closures “proactive” measures to keep peace at parks, and said that the closure decisions were made by NYPD leadership without his input.

“Sometimes the best way to avoid conflict and also address real community concerns about noise or violence is to do something proactively,” he said. “We won't do it often, but we'll do it when necessary.”

De Blasio pushed back on reporters who suggested that the enforcement recalled police conduct in ending racial justice protests a year ago, which resulted in mass arrests and was highly criticized by a city watchdog agency report.

Crime in the Sixth Precinct, which includes Washington Square Park and the tony West Village and Greenwich Village neighborhoods, has spiked in the past month.

In the past four weeks, the area saw more than double the number of assaults, robberies, sex crimes and felony larceny when compared with the same period last year, according to data in the NYPD’s CompStat system.

However, total incidents for the calendar year to date remain lower than the same period in 2020, including the city’s near-shutdown at the outset of the pandemic.

Some regular parkgoers feel that the area is clean and well-kept, despite growing concerns over noise and disorder.

“People that work here, they clean the park every day,” said Monty Bernstein, a familiar presence in the park who tans with a foldout mirror while sitting in a small folding chair nearly every sunny day of the year. “What goes on at night, they have no control. But the park is cleaner than it's ever been. The grass is nicer.”

Sumner and other residents, however, say they are concerned that the quality of the park is heading downhill because of skateboarding that produces near-misses with pedestrians, as well as unchecked drug use in the western edge of the park. She said that tampering with the fountain has led to five breakdowns since April.

“Everybody in the community pretty much supports the curfew right now, because it’s so out of control,” she said.

The nighttime noise from the park has a particularly dramatic effect on Sumner’s family life. 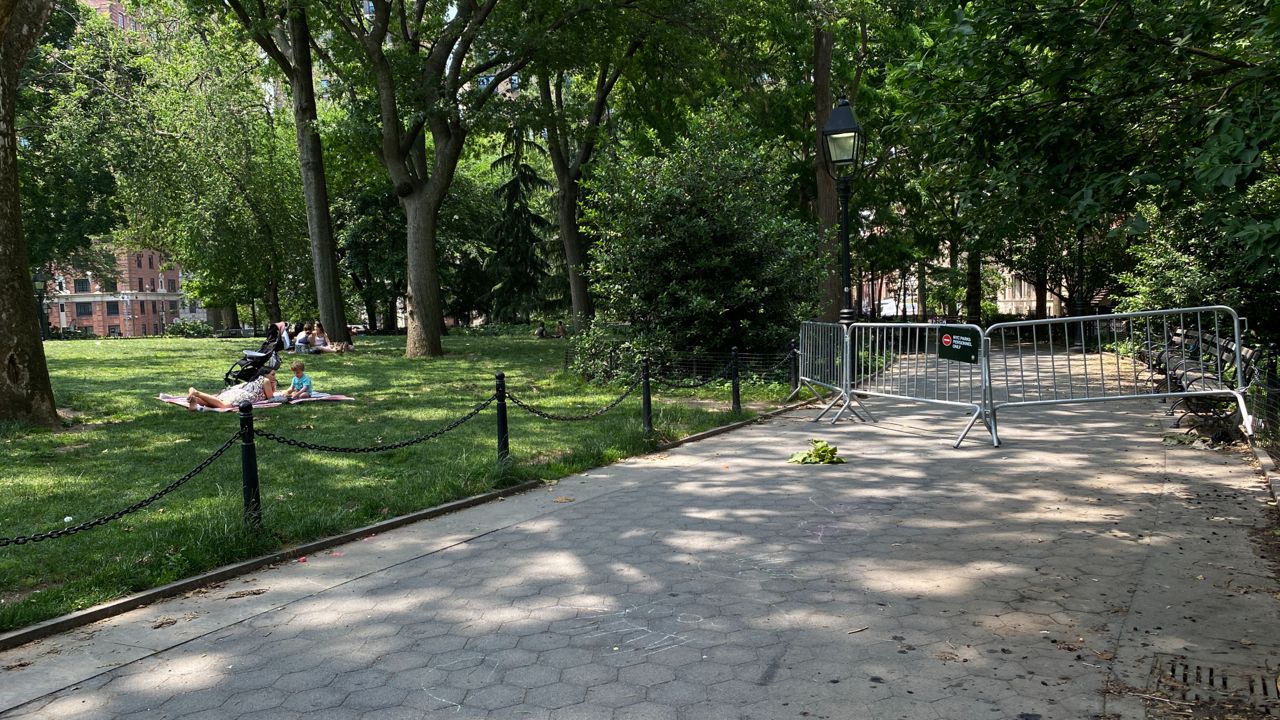 The park's northwest corner, a longtime gathering area for people with substance use disorders, was closed recently in an effort to stem crime in the area. (Credit: Ari Feldman)

She lives with her aging mother, a refugee from Nazi Germany with late-stage Alzheimer’s disease, in a historic townhouse owned by New York University on Washington Square North. Sumner says that loud noises from motorbikes and ATVs driving through the park, as well as from late-night fireworks, frighten her mother and recall the violence of the war for her.

“She gets scared,” Sumner said. “We’ve bought a sound machine, we close the curtains, and we sit with her until we feel like she’s really asleep. But then fireworks go off and she’s up again.”

Sumner said she is still working with the city’s Parks Department and local police leaders to try and develop a plan that would direct more social services toward mentally ill and homeless people in the park.

“It’s unfortunate, because this place has always been a place of protest, a place of revelry,” she said. “What’s happening right now is preventing people in this community and tourists from really getting to use the park the way everybody else does.”