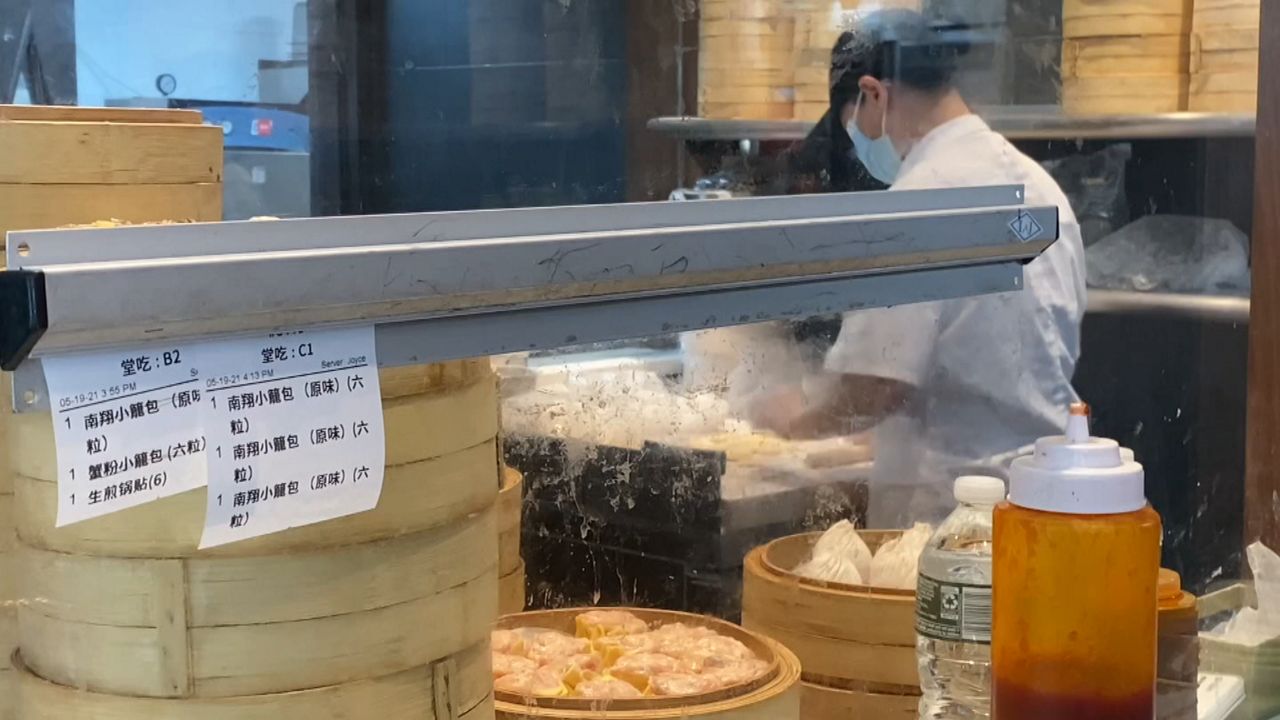 Officials say anti-Asian discrimination kept people from traveling to the neighborhood during the pandemic.

QUEENS — Nan Xiang Xiao Long Bao is one the most popular restaurants in Downtown Flushing.

The soup dumplings attract foodies from all over the city. Before the COVID-19 pandemic, it was a destination for dining.

But manager assistant Alice Lin said the business model changed during the pandemic. While the number of people coming to dine-in dropped, deliveries are now way up.

“Business is very busy. We have, normal time, we have one person to pack to deliver food. But after the pandemic, we have four, five, six person to handle delivery food,” said Lin.

We visited the Prince Street restaurant last March, just five days before the city’s restaurants closed to indoor diners. At the time, sales were already down by 50% because people were staying out of the neighborhood due to concerns about the coronavirus.

“It used to be very crowded at this time of the day,” said assistant manager Raymond Li said last March.

For many businesses in Downtown Flushing, the economic burden started even before the city shutdown.

The Lunar New Year is typically the busiest and most profitable time of the year in Flushing, but officials said anti-Asian discrimination kept people from traveling to the area last year. John Choe, who heads the Greater Flushing Chamber of Commerce, said that xenophobia has continued into 2021.

“Part of the problem is that we still have this bias against Asian communities. Attacks on Asian Americans that are related to the pandemic  in the sense that people are blaming our community for what’s going on here. And the businesses are getting the residual impact of that as well,” said Choe.

Down the block, James Chen was busy when NY1 stopped by. He owns Blink Marketing. He prints menus, T-shirts and fliers for 2,000 restaurants across the country. Many of his customers are in Flushing, but he said about 20% of his clients shut down during the pandemic. He estimates it'll be another year before businesses are back on their feet.

“Still, there’s a long way to go. With the inflation that’s going on, rent is still very high. And a lot of customers still refuse to dine-in to most of the restaurants here in Downtown Flushing, which they heavily depend on dine-in customers because the rent they’re paying does not justify take-out only,” said Chen.

But the outlook is a little different a few stories up. At Leaf Bar and Lounge, owner Todd Leong was cautiously optimistic.

“We actually have more outdoor space than indoor space. And as the summer is rolling around, the weather is changing, business is picking up,” said Leong.

Considering the rooftop was forced closed for four months last year — that’s definitely worth raising a glass to.