Telling the story of New York City through its names

Most people have heard of the infamous, if not dubious, story about possibly the worst real estate deal of all time, at least for the Lenape American Indians. It was in 1626 and Peter Minuit allegedly purchased the island of Manhattan from them for the equivalent of $24.

But what might be less well known is that for much of the 19th century, the name “Manahatta” was widely accepted as a variation of the Lenape term Manahachtanienk —   “island where we all become intoxicated,” according to author Joshua Jelly-Schapiro.

In his new book, “Names of New York: Discovering The City's Past, Present, and Future Through its Place Names,” Jelly-Schapiro explains that the scholar behind that translation, John Gottlieb Ernestus Heckewelder, was later critiqued by linguists for his overabundant association of Lenape words with drinking. (And though that understanding of the island’s name has long since fallen out of favor, it’s kind of fitting considering the many ways to get inebriated in this city.)

Today, the most commonly taught version in schools is “island of hills.” But, in recent decades, new research from linguists, American Indian activists and Lenape descendants themselves have offered competing translations. According to Jelly-Schapiro, the most widely credited version comes from a scholar and native Munsee speaker, the Algonquian language spoken by the people Henry Hudson allegedly met on a late summer’s day in 1609, whose translation reads: “place where we gather timber for bows and arrows.”

It’s the richness of these stories contained in the names around us — and the ways in which they can often adapt new meanings — that most excite Jelly-Schapiro, a New York University professor, geographer and writer who has studied names his whole career.

His new book is a deep dive into the names that surround the city’s streets, neighborhoods and places and sprang from his work on “Nonstop Metropolis,” which he co-created with historian and author Rebecca Solnit. That book contains 26 maps, reimagined through often untold histories of the city.

The heavily researched “Names of New York” takes that work further and raises questions surrounding the impact of a city filled with names that don’t reflect the diversity it currently represents.

As the movement to reclaim names and monuments continues to grow throughout the country, including in New York City, Jelly-Schapiro spoke with NY1 about why names matter and when it becomes vital to rewrite history.

The interview has been edited and condensed for clarity.

NY1: What do the names of New York tell us about the city?

Joshua Jelly-Schapiro: There's a very particular flavor to New York place names that, in part, has to do with the Dutch presence. New Amsterdam only lasted for  40 years, but it's fascinating how it remains on our maps and how people seem to be attached to that Dutch moment.

One thing about places in the so-called New World like New York is that history goes back several hundred years, but it doesn't go back several thousand years, as it does in some older places in Europe, or Africa, or Asia. The layers are there to be uncovered, reaching back to the indigenous, to the Lenape. New York is such an incredibly rich context for thinking about the layers of history through place names and where they come from and how their meaning evolves and changes.

I'm particularly fascinated by all these names that are not necessarily still Dutch, but are basically English renderings or riffs on the Dutch. For example, Coney Island was “Conyne Eylandt,” which meant “Island of Rabbits” and the English just seemed to like the sound of that and made it Coney Island, which doesn't mean anything in English, but is still on our maps and is now associated with the amusement parks and the beach and all the rest. Another example is Gramercy. It was “Krom Moerasje” — crooked march. You have all these place names that are not necessarily one language or the other, but they build upon what came before. You see that all over the world, but there's a particular flavor to some of those names in New York, in part because they're Anglicized Dutch, which is our one of our unique things here.

What are some of your favorite place name stories?

I love a particular name that basically just exists because someone liked the sound of it.

Arverne in Queens got its name because the developer in that area by the Rockaways was called Remington Vernam and, apparently, his wife liked the way that he signed his checks — R. Vernam. She essentially convinced him to name the developments there based on that.

There’s also the story behind Utopia Parkway, which is also in Queens. It's kind of a sad story, but it’s also a fascinating and ironic one, given that the literal meaning of utopia from the Greek is “no place.” Utopia Parkway exists because the developer there was hoping to build a housing development open to people of all backgrounds. Notably back then in the early 20th century, Jews were excluded from many housing developments. But apparently, the project ran out of money and the place was never built. But Utopia Parkway is still on the map, sort of a road to nowhere. 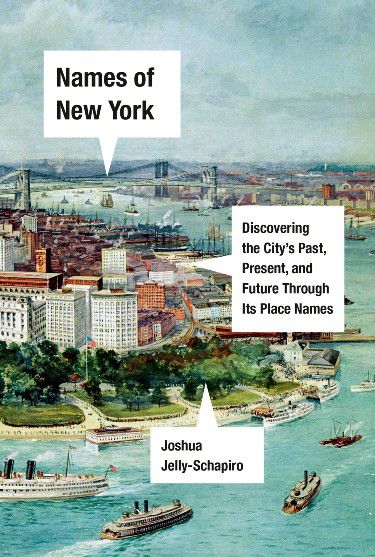 When it comes to the history of names, it seems the process includes largely relying on storytelling and translations through multiple languages. How did you go about this research for the book and at what point do you decide you’re as close to a definitive answer as you can get?

Any kind of historical work, you marshal all the evidence you can and make the best conclusion. Sometimes it's important to couch that claim and say, ‘This is just the best guess we have.’ But there is a historical record for many of the Dutch and English names.

But what’s really interesting about this question is in regards to the many indigenous place names, things that come from the Munsee language and the Lenape people.

There is this wonderful energy and attention being paid now and over the last several decades, towards actually trying to speak to the speakers of Munsee. There's not many of them left, but there are people and linguists who study the language and they're trying to keep it alive and revive it. It’s fascinating, because often not definitive answers, but it's important to engage with the people who actually know these languages, and our native culture bearers who are thinking about these topics deeply.

In New York, it’s actually much easier to add a secondary or honorary street name because of a city policy that dates back to 1992. I find that quite wonderful.

But when it comes to completely renaming something or taking something down, those conversations are not easy.

I think we'd all do well to remember the power that we have and that our ancestors had to change the meanings of a particular name. The most potent example here is Harlem. Harlem is named after a town in Holland and it was placed on a map by men who were associated with the Dutch West India Company and very much involved in the slave trade.

But over the last century, Harlem has become iconic of Black freedom, Black pride and Black culture. I don't think anyone would propose changing the name at this point because it has a very different meaning from the one it held by those who first placed it on the map.

These are not simple questions. But what's not complicated is adding names and memorials and monuments to those who've contributed to other histories, including women and people of color, who haven't necessarily been celebrated in public space in the same way.

Tune into our live conversation with the author on Friday, 5/20 at 12 p.m. EST on NY1's Instagram page, where you can also submit your questions on NYC 's names and history.