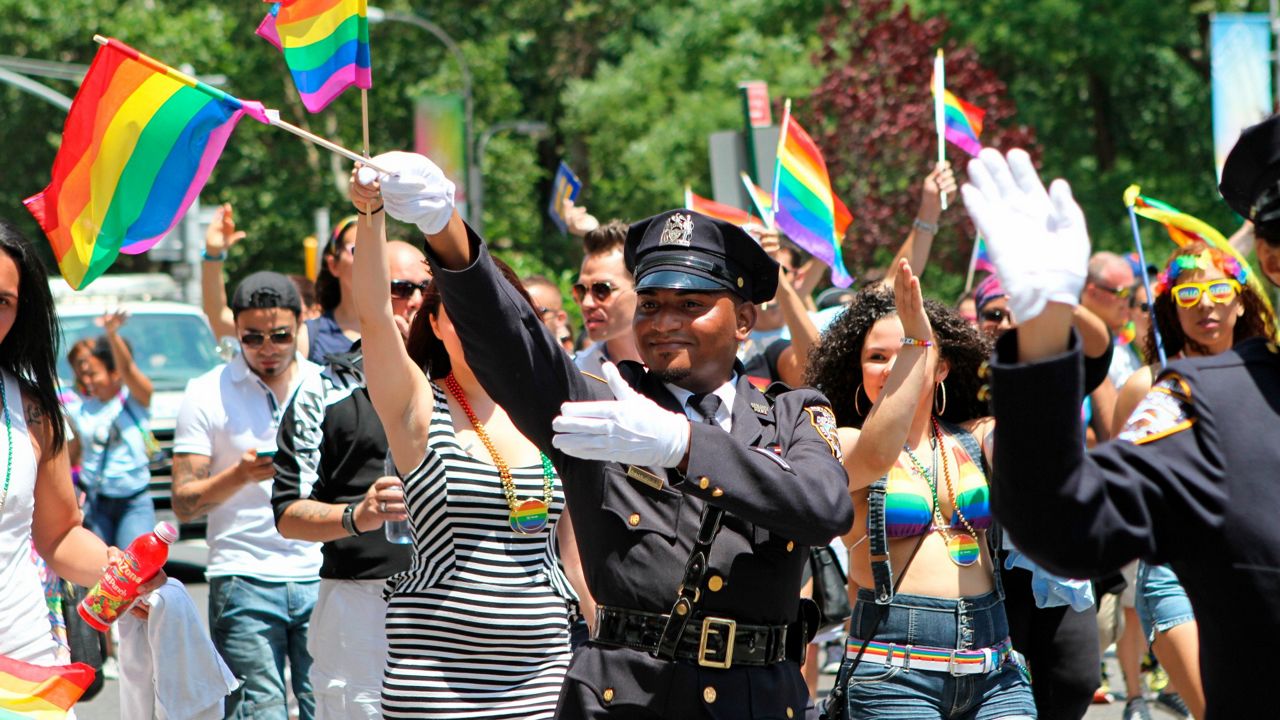 FILE - In this Sunday, June 29, 2014 file photo, NYPD police officers march along Fifth Avenue during the gay pride parade in New York. Organizers of New York City’s Pride events said Saturday, May 15, 2021 they are banning police and other law enforcement from marching in their huge annual parade until at least 2025 and will also seek to keep on-duty officers a block away from the celebration of LGBTQ people and history. (AP Photo/Julia Weeks, File)

It’s almost June, which means the city is getting ready for Pride Month. And after a year of virtual celebrations, many New Yorkers are ready to be together once again.

"People can come out, people can meet, people can gather, people can exchange thoughts and ideas and be proud! And we were locked up and bolted away for a year. I wanna see the energy cause I’m sure it’s gonna be incredible” said Michael Strachan, an East Village resident.

But a recent decision by NYC Pride to ban participation by police groups at future events is sparking outrage.

It says the ban on all corrections and law enforcement exhibitors lasts until 2025. The group says it will transition to allowing increased community-based security, while reducing the NYPD’s presence at events.

That applies to the NYPD’s Gay Officers Action League or GOAL. The group’s president, Brian Downey, said the ruling is offensive.

"The referral of the Gay Officers Action League as law enforcement exhibitors is demeaning and dehumanizing to our members. These are people that have had their own struggle as queer people as members of the community that carry that struggle with them every day of their lives,” said Downey.

Heritage of Pride, which plans New York’s official Pride events, said the NYPD will always play a key role in keeping attendees safe. But it wants to change how police officers are highlighted at these events.

"We’ve been asking GOAL, we’ve been talking to them the past weekend, the past couple of months, just about how, taking a step back and seeing what the effect is of having someone in uniform with a sidearm on,” said NYC Pride Co-Chair Andre Thomas. “What does that present to someone who’s Black, who’s trans, someone like myself who sometimes sees a police officer and feels anxiety.

But Downey denies those concerns were ever brought up with GOAL.

"No part of the conversation ever turned to can you maybe take the uniform off for a few years and we evaluate what that looks like, can you march at the end of the parade? Can you march earlier than everybody else so you’re not part of the main contingent. Those conversations were never, ever had,” said Downey.

NYC Pride said it is working with the city to see what in-person events they can hold. The Pride Parade is slated for June 27.