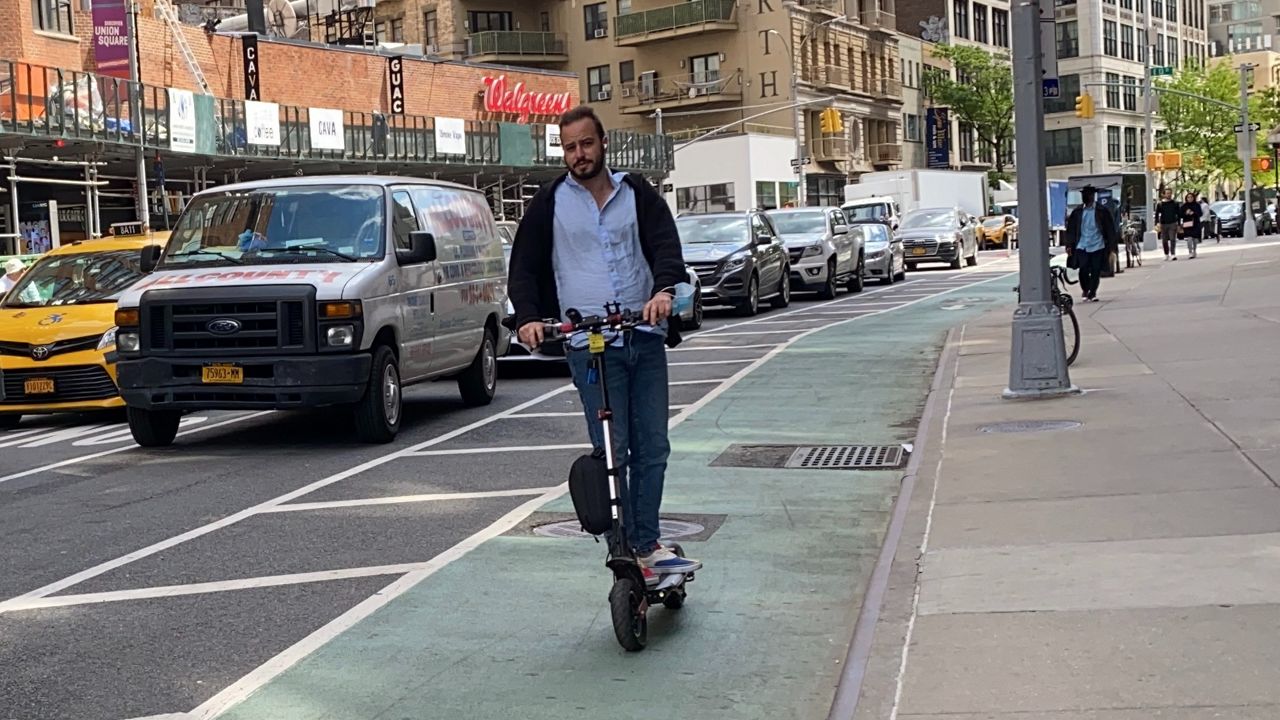 A New Yorker zips through the streets on an e-scooter. Photo courtesy of Dan Rivoli.

David Itah was ahead of the curve when he started riding an electric-powered scooter three years ago.

"It saves a lot of time in the city. I love the fresh air, I don't like to be underground in the train," Itah said.

And scooter traffic, since the pandemic, he says, has "definitely doubled — doubled — than last year. A lot of people."

Commuters looking for a way to avoid riding in a train, car or bus has accelerated the trend known as micromobility — personal, lightweight electric vehicles.

The city is taking a step toward the trend by launching a pilot E-scooter in-share program this summer in the East Bronx, similar to scooter-share programs in cities around the world.

At a demo by Bird, one of the three companies providing scooters for New York's pilot, Bronx resident Jose Reyes took his first spin on one.

He said he had been thinking about getting an e-scooter.

"It's a good way to commute. It's a good way to get around places, you know, not always you wanna get on the bus or the train, especially if it's nearby. You could always jump on your scooter and keep going," Reyes said.

It's unknown how many people are zipping around New York in electric-powered scooters, mopeds or bicycles. The city doesn't keep track or conduct surveys, the way it does to measure cycling traffic.

"This data would enable us to have a sense of where people are riding, where the demand is and where we need to implement more specific lanes for these vehicles, as well as get a sense of how many people want to use these vehicles," said Sarah Kaufman, associate director of the NYU Rudin Center for Transportation.

The city transportation commissioner said that information will be collected from trackers on the e-scooters in-share program.

"We're going to look at the data and figure out if people are using them safely. Are they leaving them, where they're supposed to leave them or are they scattering them on the sidewalks, as happens in some other cities. We're gonna be very concerned about safety," Gutman said.