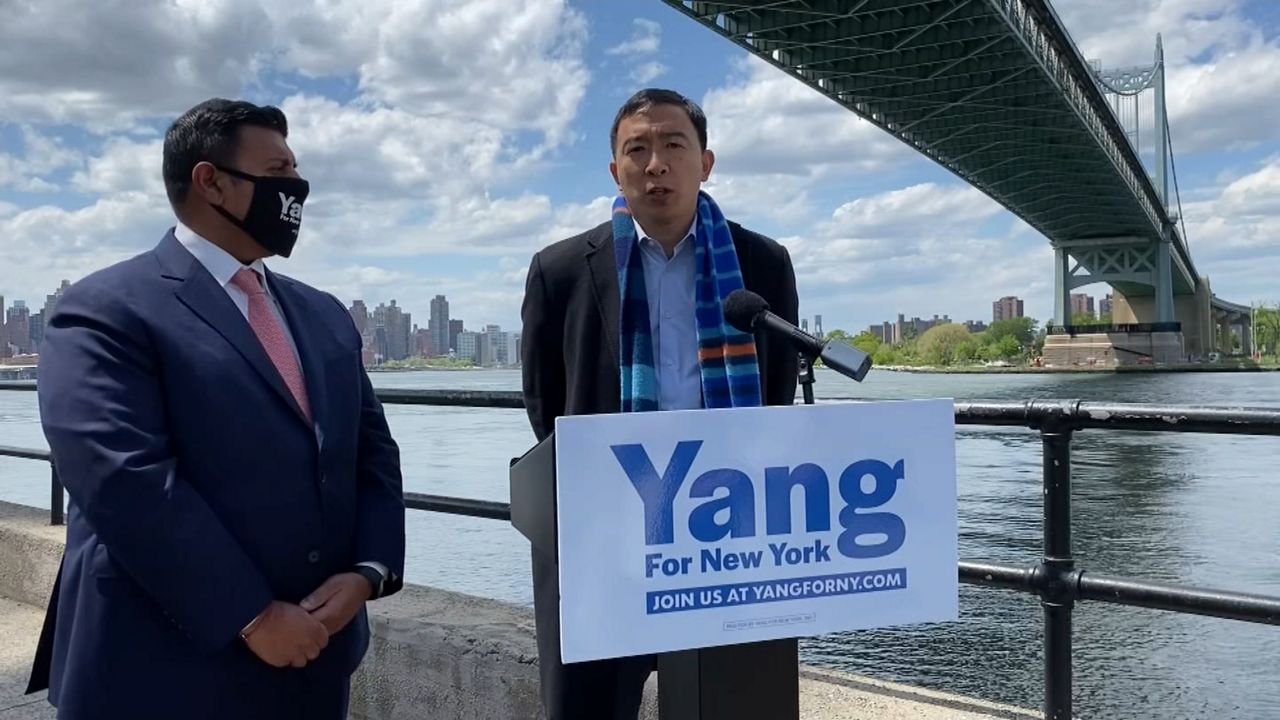 Andrew Yang gets praised by Republicans, heckled in Queens for pro-Israel tweet

Andrew Yang wasn’t alone among Democrats in expressing support for Israel as violence escalated between the nation-state and Palestinians.

Yang tweeted Monday night, “I’m standing with the people of Israel who are coming under bombardment attacks, and condemn the Hamas terrorists.”

I'm standing with the people of Israel who are coming under bombardment attacks, and condemn the Hamas terrorists. The people of NYC will always stand with our brothers and sisters in Israel who face down terrorism and persevere.

But he earned plaudits from Republicans.

Stephen Miller, a top adviser to Donald Trump, called Yang “exactly right” and contrasted his position with that of Rep. Ilhan Omar.

Yang said plainly that he didn’t want their praise.

“I certainly would never ask for or want their support,” he said.

The candidate for mayor found a less receptive audience at an unrelated stop in Astoria Park, where passersby recognized and accosted him. Here is part of the confrontation that NY1 witnessed.

“What do you have to say about your tweet? Directly to New Yorkers, right now?" an unidentified woman asked.

"It’s heartbreaking to all of us what’s happening in the Middle East," Yang said.

"It is, it is. People are dying; civilians are dying," Yang said.

Yang, who has support from key Orthodox Jewish leaders in New York, also acknowledged Tuesday he was uninvited to an event hosted by the Astoria Welfare Society to mark the Muslim holiday month of Ramadan.

He had been slated to give out groceries ahead of Eid.

“He should have sided with both sides. He should have looked into the Palestinian side,” said organizer Juel Ahmed, adding: “He looked like a really good candidate to me but he’s not getting my vote and I don’t want him as a mayor for my city.”

One of the New Yorkers who stopped Yang in Astoria Park said the conflict is not just about Israeli soldiers and Hamas militants, but about humanity.

“He went to bat for Israel, completely disregarding the lives of Palestinians lost," Rahman said. "Nine children were lost in one rocket. Four from one family.”

By the end in the day, Rep. Alexandria Ocasio-Cortez, whose district includes part of Astoria, was also weighing in.

She tweeted, “Utterly shameful for Yang to try to show up to an Eid event after sending out a chest-thumping statement of support for a strike killing 9 children.”