Cuomo said the Johnson & Johnson one-time shot will be offered Wednesday to Sunday at subway, LIRR and Metro-North hubs.

No appointment is needed at the sites but times for vaccine distribution will vary.

Gov. Cuomo said a free 7-day MetroCard will be given out to anyone who gets the vaccine at a subway station. Those who get a shot at a LIRR or Metro-North site will get two free one-way trips on the commuter rail system.

"It is a creative idea, we're trying many creative ideas because we have to get the vaccination rate up," said Cuomo. "And this situation, we've always handled this as a community. Everyone should be doing everything they can to get people vaccinated." 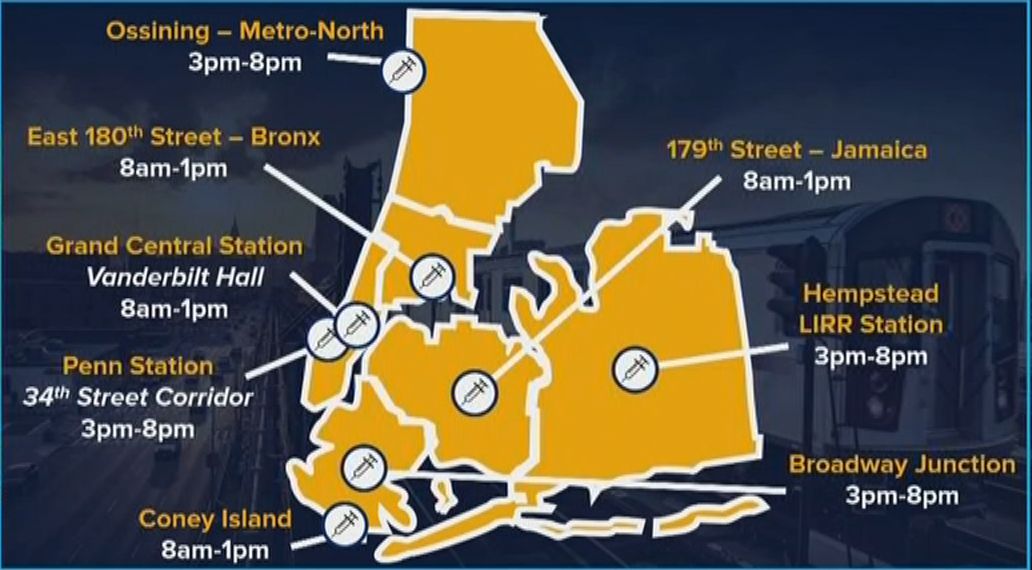 During a news conference in Midtown, Cuomo also said the SUNY and CUNY boards will require vaccinations for students coming back in the fall.

He also urged private schools to do the same. Several area colleges, including NYU, Columbia and St. John's had previously announced that students would be required to get the shot.

Cuomo said the state cannot legally enforce the requirement with the vaccines still under emergency use authorization by the U.S Food and Drug Administration. However, Cuomo said he’s confident the FDA will give them full approval status by September. Private schools can enforce their own rules, the governor's office said.

"Let's make a global statement: You cannot go back to school in person in September unless you have a vaccine," said Cuomo. "That will be a major motivation for people to get the vaccine. And if you have to get it by September you may as well get it now, why wouldn't you get it now?"

Monday's announcement comes as the statewide positivity rate stands at 1.43%.

Cuomo said the highest rates are still being observed in Western New York and the Finger Lakes region.

Staten Island has the highest rate in the city at 1.46%.

Over the weekend, Gov. Cuomo announced 48.4% of adults in the state are fully vaccinated against COVID-19 with more than 16 million doses administered so far.

Ridership still remains at 37% of the pre-pandemic level.