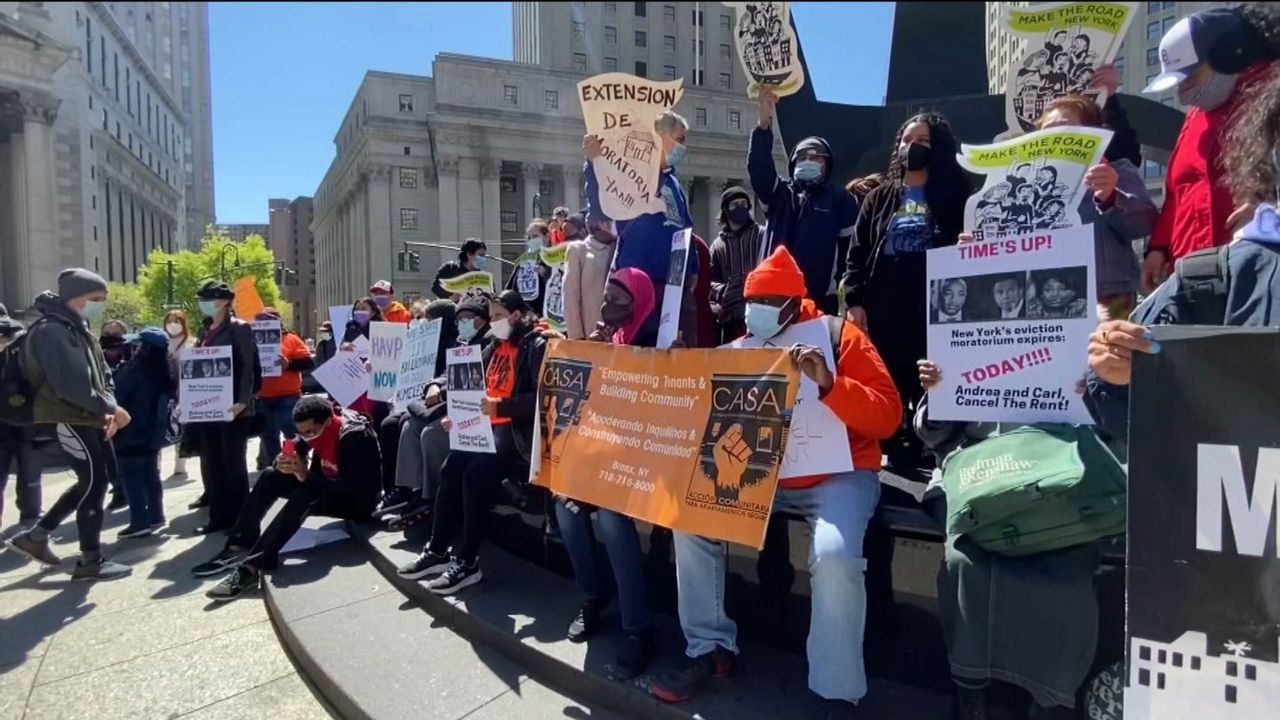 “I’m very, very worried. I try not to think too hard about it,” said Marsha Hinds, a renter from Crown Heights, Brooklyn.

Being evicted is something Marsha Hinds thinks may happen as the state’s eviction moratorium expires Saturday. She lost her job in March of last year because of COVID-19, owes her landlord more than $7,000 in back rent, and he wants it.

“The calls come in once every two weeks or so. They’re polite inquiries, but their inquiries all the same,” said Hinds.

She wants Governor Andrew Cuomo to speed up the creation of the application for the two-plus billion federal dollars in rent relief for state residents so she can apply.

“I don’t want to be in arrears in my rent. I don’t like the idea of being a dead beat. I want to get work. I want to be able to pay, but while this is going on I’d like a little help from the state,” she said.

The tenants and their advocates marched to Manhattan housing court echoing her concerns and wanting politicians to extend the eviction moratorium beyond its May 1 expiration date.

“What we want to see is what we’ve been calling for all along," said Esteban Giron of the Crown Heights Tenant Union, “a blanket moratorium for all New Yorkers for the remainder of the pandemic and at least 180 days after the state of emergency so things can stabilize.”

“I think if you want to bankrupt the small landlords, sure, that’s the way to go,” said Cynthia Brooks, the landlord of a small building in Brownsville, Brooklyn.

Brooks said the current moratorium has put her on the edge of ruin. She scrimped and saved, working at the MTA to buy a four-unit building, and, because of the current state eviction moratorium, she can’t kick out a squatter who the courts ordered out just as the pandemic hit.

“They stopped paying rent in April," she said. “They were due out at the end of June.”

She says the lack of rental income, damages done to the property and upkeep have her with no savings left.

She says she’s going to have to put her building up for sale.

“We’ve been doggy paddling here, but we’re beginning to sink here. There’s no rental assistance funds. I mean they’re holding that up. We need that money. I have a super that I have to pay. That’s a job that I created. These apartments were for people in programs, FHEPS (Family Homelessness & Eviction Prevention Supplement), low income, so I tried to help my community here, but it backfired on me," she said.  "I need help now and there’s nobody there because ‘you’re a landlord you don’t need help.’ I do need help.”

"We’re trying to save people’s lives, not make sure that everybody gets paid. Like, we can deal with that. We’ll deal with that, but right now there’s a very clear mandate, I think humanitarian mandate to not evict people," said Giron.

Tenants rights organizers believe not enough people have been vaccinated to make it safe to put people out of their homes.

But building owners say even if the eviction moratorium expires Saturday, there are ample tenant protections in place, including the CDC’s eviction ban and a state law that prevents a landlord from evicting someone for unpaid rent during the pandemic.

“Maybe they can’t evict me, but they can make things very uncomfortable for me,” worried Hinds.

Tenants like her say they want every protection possible. Not paying rent is a recipe for not feeling secure at all in one's home. They say they’re worried an eviction would still compromise their safety from COVID-19.

Assembly Member Jeffrey Dinowitz (D-Bronx) did propose a bill, which would extend and expand the eviction ban through August, but it was only introduced Friday.