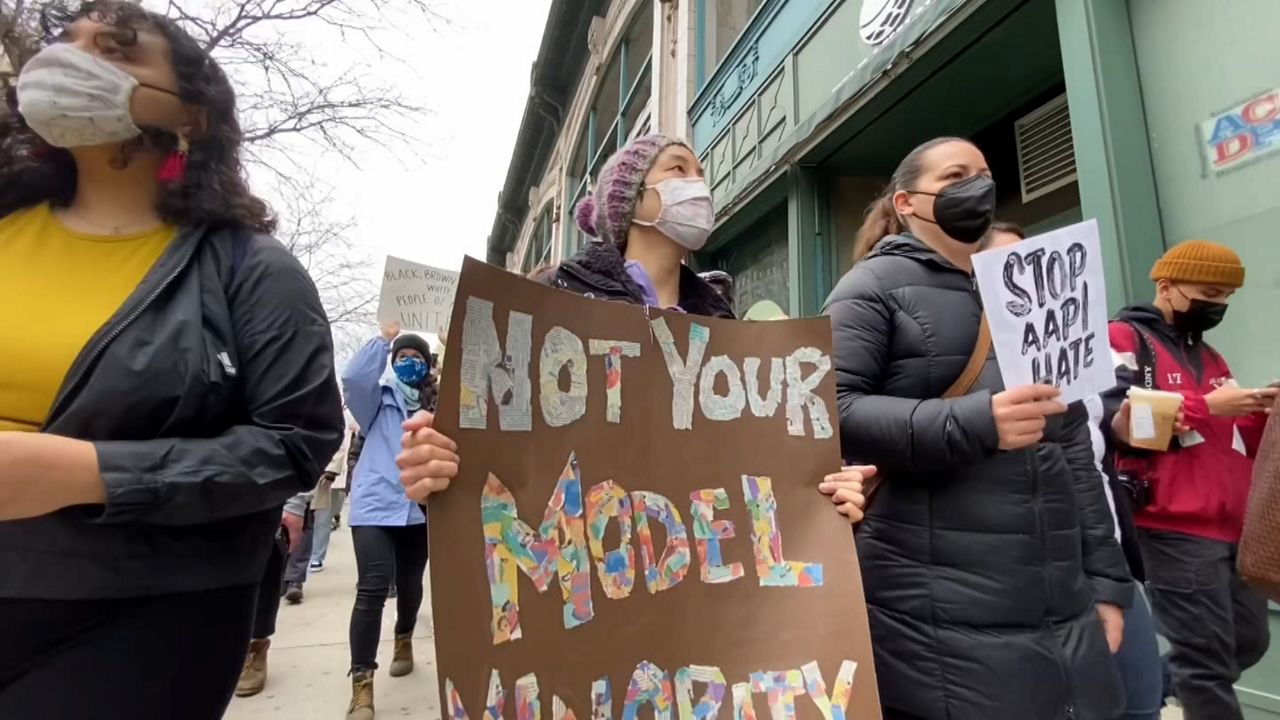 More than 200 people gathered in Mitchel Park at 168th Street and Broadway, rallying to march against anti-Asian violence.

“It’s frightening," said Keilin Huang, who took part in the march. "Honestly, I’m scared as an Asian-American woman to go out now.”

She said she believes that it's good people know about the rise in anti-Asian incidents, "because I think before, everyone was just like, no it’s not happening, everyone is making this up."

She’s not an organizer, but is grateful for the outpouring of support from the non-Asian community.

"I think having this support and doing these rallies has helped a lot,” she said.

They brought their message through several neighborhoods in Northern Manhattan, down Amsterdam Avenue, east on 125th Street and south on Lexington Avenue.

“If one person is attacked, an Asian person, then we’re all under attack in the spirit of human rights and solidarity," said former Black Panther Jamal Joseph. The Author and Columbia University Professor spoke to the crowd at the Adam Clayton Powell Jr. statue at the intersection of Adam Clayton Powell Jr. Boulevard and 125th Street.

The themes dug into larger societal issues and history.

Demonstrators attribute the rise in violence against Asians to Donald Trump calling COVID-19 the “China flu.”

“There’s a long history in this country of any Asian violence that’s not at the hands of individuals,” said Fernandez.

It includes the exploitation of Chinese labor to build the railroad and internment of Japanese Americans during World War II.

“U.S. imperialism and U.S. capitalism the world over is the purveyor of anti-Asian violence on a mass structural level. For example, the United States dropped more bombs on Vietnam during the Vietnam war than were dropped by all sides combined during World War II," said Fernandez, who is also an associate professor of History at CUNY's Baruch College.

She denounced U.S. polices and the government, but not the country itself.

At least one of the marchers appeared to have different ideas, dragging the flag through the dirt.

Other demonstrators who didn’t sully the flag or draft the statement of purpose for the march say it’s the discussion that’s important.

"Hate is individualized. Racism is systemic and so we need to be talking about interlocking systems of oppression, of militarism, of imperialism, of capitalism and all the things that oppress our communities,” said demonstrator Jennifer Kim. She told NY1 as she marched, “If we are to really make change and for this to be a transformational moment those are the things that we need to be talking about."