A U.S. general poses for a photo with an Afghan interpreter during a command visit on Tuesday, April 6, 2010. (Courtesy Department of Defense)

Lawmakers to push for more visas for Afghan allies as U.S. prepares withdrawal

A bipartisan pair of lawmakers is preparing legislation that would allocate more visas for Afghan allies who worked with the U.S. military in the country, setting up for a push to protect interpreters and others who aided the United States in Afghanistan as American soldiers prepare to leave.

The legislation, a reintroduction of the Afghan Allies Protection Act, would seek to provide 4,000 additional visas to the Special Immigrant Visa program, which was founded as a pathway to safety for Afghan interpreters who are often targeted — and sometimes killed — because they worked with the U.S.

But it’s unclear how the administration will chip away at the current backlog of Afghan applicants in a program that’s been plagued with slow processing and years-long delays.

There are currently more than 18,000 SIV applications pending, according to the State Department, and there were still more than 10,000 unused SIVs as of January, when the administration issued its latest report on the program. 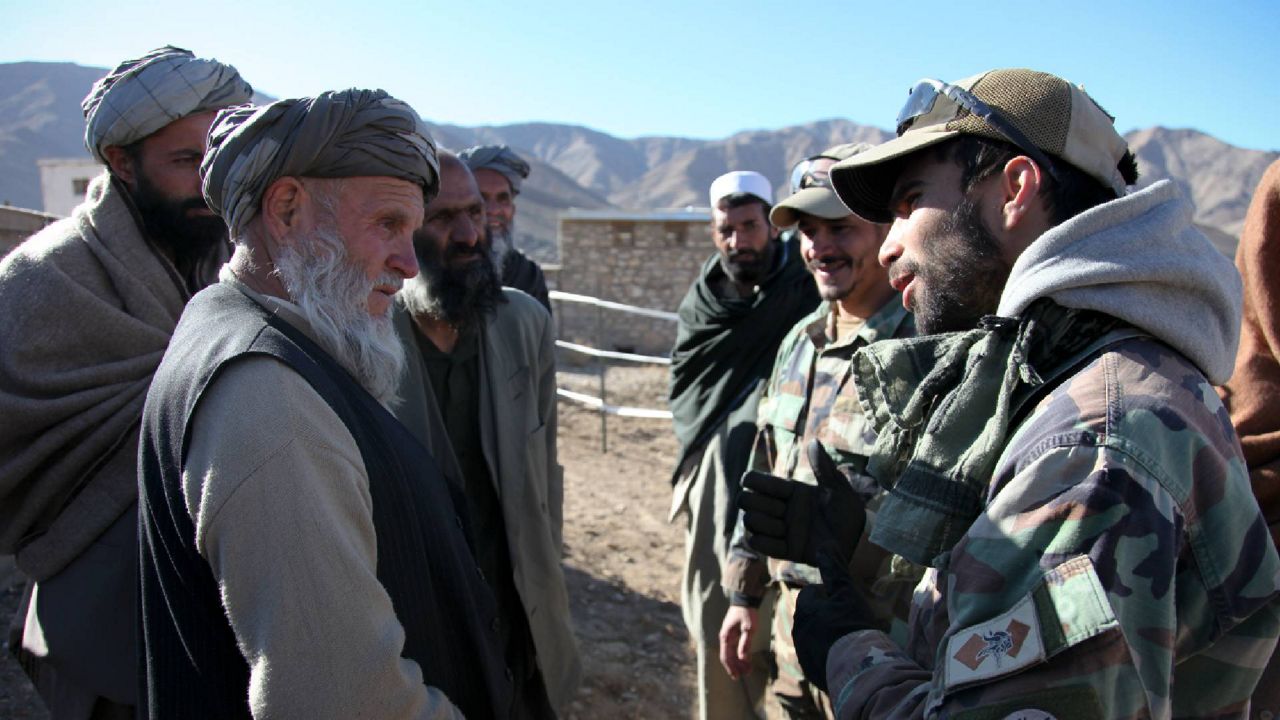 An Afghan interpreter meets with a school principal and Afghan teachers in Jalrez, Afghanistan in 2009. (Courtesy Department of Defense)

In recent years, Congress has allocated 4,000 SIVs as part of the annual defense budget, but the U.S. has regularly fallen short in the number of visas it issues by the end of each year.

The new legislation will be spearheaded by Rep. Adam Kinzinger (R-IL), who served in Afghanistan and Iraq, and Rep. Earl Blumenauer (D-OR). The bill would aim to add more visas to the program before the end of the fiscal year, when the measure is usually introduced.

The SIV program has aided people like Safiqullah Ziai, who worked in the U.S. Embassy in Kabul during the height of the Afghanistan conflict.

“We were seen as spies of the US government,” he said in an interview.

Ziai, who now lives in northern Virginia with his wife and five kids, said the potential withdrawal of U.S. forces in 2015 made Kabul suddenly dangerous. It’s what pushed him to leave Afghanistan, despite feeling reluctant to abandon his home country.

“I had that feeling that ‘Okay, now people are noticing me,’” he said. “To be very honest, I was thinking about my kids.”

In January, an Afghan interpreter known by the name “Mohammad” was killed by the Taliban after more than a decade of waiting for his SIV application to be approved. It’s the exact outcome that Afghan allies fear most, and the visa program endorsed by Congress each year is meant as a promise to bring people like Mohammad to safety.

Yet, on average, SIV applicants are waiting nearly three years for their applications to be approved, according to the State Department’s latest report, despite a mandate from Congress that the process shouldn’t take longer than nine months.

The processing of SIV applicants is more urgent than ever, advocates and members of Congress say, after President Biden announced that the U.S. would withdraw its forces from Afghanistan by Sep.11 of this year.

On Wednesday, a bipartisan group of lawmakers sent a letter to the president, calling on him to honor the U.S. commitment to Afghan and Iraqi allies who are still waiting for a pathway to safety.

The letter — signed by both Republicans and Democrats led by veteran Rep. Jason Crow (D-CO) — urges the president to “move swiftly to prioritize” the SIV program ahead of the withdrawal.

“These Afghans served with courage and with the understanding that the U.S. would stand by them and provide safe haven when and if necessary. That time has now arrived,” the group wrote. 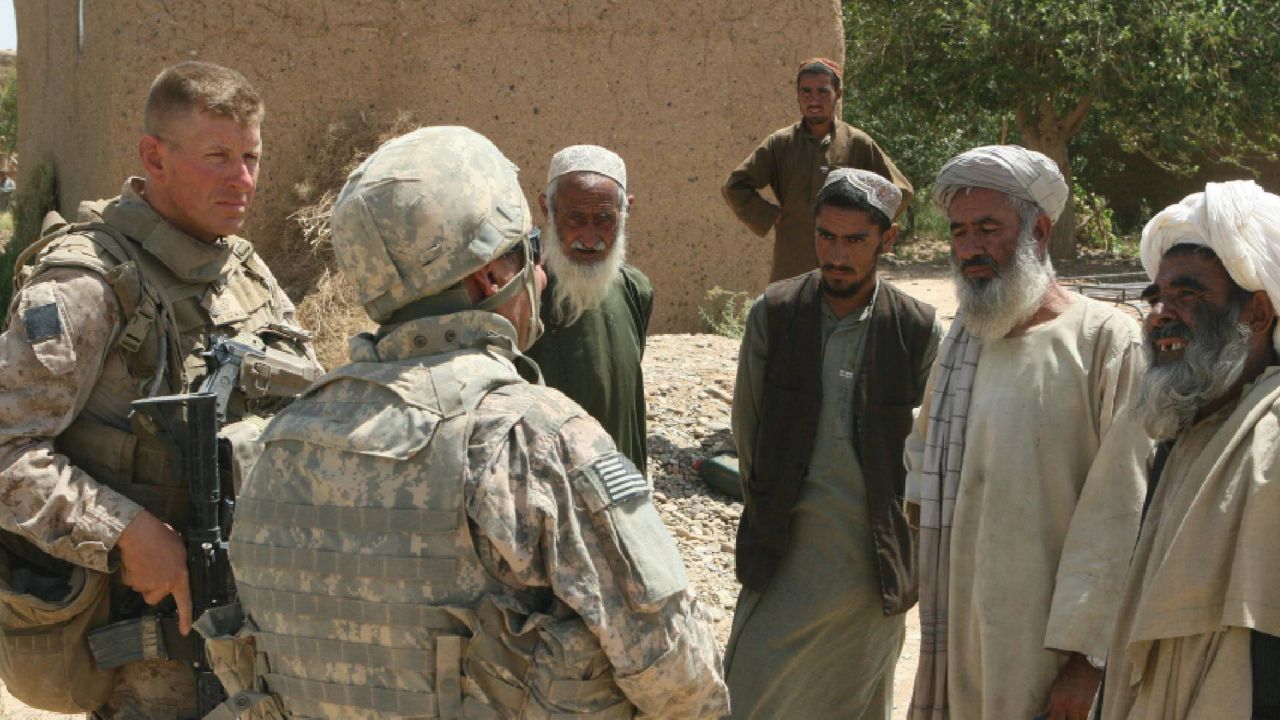 An interpreter and members of the U.S. military speak with local villagers on Aug. 1, 2009. (Courtesy Department of Defense)

Ziai said Afghanistan has already become more dangerous for interpreters who stayed behind.

“The situation is completely different now, security-wise,” he said. “Like, target killings on the street, killing people on the street.”

Delays in processing have marked the program under both presidents Barack Obama and Donald Trump. But in President Trump’s first year, the U.S. approved less than half of the 4,000 visas allocated by Congress, and the number of approvals has remained low.

To speed up the process, the State Department sent additional staff to Afghanistan this month to conduct visa interviews, a spokesperson told Spectrum News. They said the program remains a high-level priority for the administration but that embassy resources and the security situation in Afghanistan both contribute to delays.

“Everyone involved in the Special Immigrant Visa process, whether in Washington or at our embassy in Kabul, is aware of the threats our Afghan colleagues face,” the spokesperson said in a statement.

President Biden also ordered a review of the program in early February with an executive order, which is still ongoing.

For now, more than 18,000 Afghans and their families are waiting. Approximately 83% of them are still in the first stage of the process, a spokesperson told Spectrum News.

A history of bipartisan support

Bringing people like Ziai and Mohammad to safety through the SIV program has been bipartisan since its inception.

Former Secretary of Defense Jim Mattis warned President Trump in a letter about the risk of abandoning U.S. military allies. Former Vice President Mike Pence called for more attention to the Iraqi version of the program in 2007, when he was a member of Congress.

Rep. Michael Waltz (R-FL), who served in Afghanistan, personally sponsored his interpreter for a U.S. visa and wrote about the program in an op-ed last year.

He criticized the U.S. withdrawal from the country partly because it puts U.S. military allies at risk.

“The Biden administration’s reckless total surrender in Afghanistan sends the wrong message around the world that if you stand with the United States against extremism you will be abandoned,” Waltz said in a statement to Spectrum News.

Advocates said that if additional visas are approved by Congress, it’s only the first step.

“It’s a matter of closing the gap that will exist if there's a big surge in applications as we move closer to September,” Bates said.

“We continue to see applications go into this pipeline and then just languish there for years,” he added. “It’s not a situation where people are being denied en masse. It's people who aren't getting an answer at all.”

The bill coming from Reps. Kinzinger and Blumenauer, who have worked to call attention to SIVs for years, would also seek to address delays in the State Department’s processing.

Ziai, who moved to the U.S. with his SIV in 2016, says he hasn’t found the best job here in the United States, but when he compares it to living back in Afghanistan, he said he remains positive.

“I'm very happy to be living in this country, especially when I see my kids going to good schools, studying. The kindness they find from their teachers, from the community, from everywhere. That's the positive things for me,” he said.