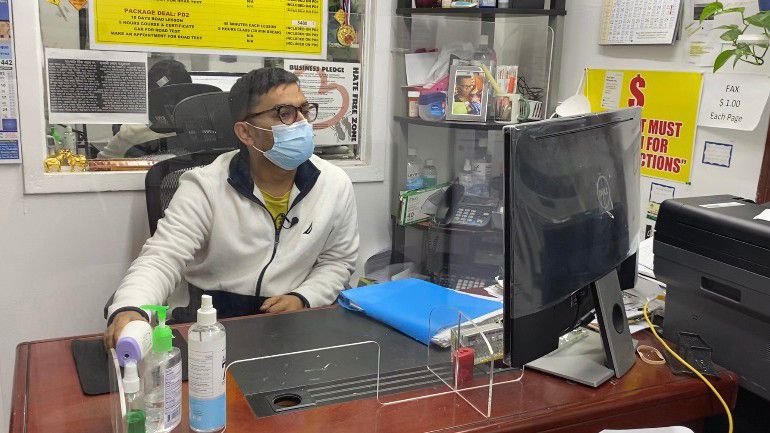 QUEENS — Russell is an undocumented immigrant, and for most of the last year he's has been out of work because of the pandemic.

He asked we refer to him only by his American nickname because of his immigration status.

"It is very scary," Russell said. "Now we are living completely uncertain situations, so every single moment we are thinking how will we survive?"

Russell was laid off from his administrative job at a Queens driving school a year ago.

But his immigration status prevented him from receiving any government unemployment or stimulus benefits.

"We are also paying taxes like sales tax, property tax but we are getting nothing, not a single penny,” he explained.

Two months ago he was brought back to work but only one day a week. He said it's been impossible to make ends meet.  He does not have enough money to buy groceries, pay bills, or send money back to his family in his native Bangladesh.

"After the pandemic started I haven't been able to send money so they are also suffering this problem," he said.

Democrats in the state legislature want to help laid-off workers like Russell.  As a part of negotiations over a new state budget, they've demanded the creation of a multi-billion-dollar "Excluded Workers Fund" to aid workers who did not qualify for pandemic unemployment benefits.

"We can get back our regular life," said Russell. "We can pay our down debts and we can support our families,” said Russell.

The controversial proposal would issue payments to perhaps as many as 275,000 undocumented workers as well as to people who were incarcerated.

The plan faces opposition from suburban Democratic legislators and Republicans. Workers like Russell worry the fund might not be created.

"It feels really bad because we all are New Yorkers but they treat us differently," Russsell said. "It is complete discrimination."

Hundreds of the excluded workers marched on the state capitol Monday in a final push to demand creation of the fund.