A Year Into the Pandemic, the PPE Shortage Becomes a Disconnect

WASHINGTON — Recently, Esmé Trahair has spent much of her workday tracking down masks, gloves and testing swabs.

“For the months of January and February, more than half my job was resourcing PPE,” she said.

It’s something she’s been doing off and on all year: researching different suppliers, comparing prices, reaching out for donations and sometimes waiting for orders that never come.

They’re things that, in theory, aren’t supposed to monopolize Trahair’s job as a project coordinator at Joseph’s House, which shelters homeless men and women in Washington, D.C. who have HIV or cancer late in life.

But Joseph’s House is one of thousands of smaller providers — clinics, assisted living facilities, home health aides, shelters and more — that are still struggling to find and pay for PPE, left behind by a supply boom at the national level that often deals in bulk orders and inflated prices.

“We have really had to advocate for ourselves to not slip through the cracks,” Trahair told Spectrum News.

More than 86% of donation requests made to the national organization Get Us PPE came from non-hospitals in February, with a large chunk coming from nonprofits and schools. 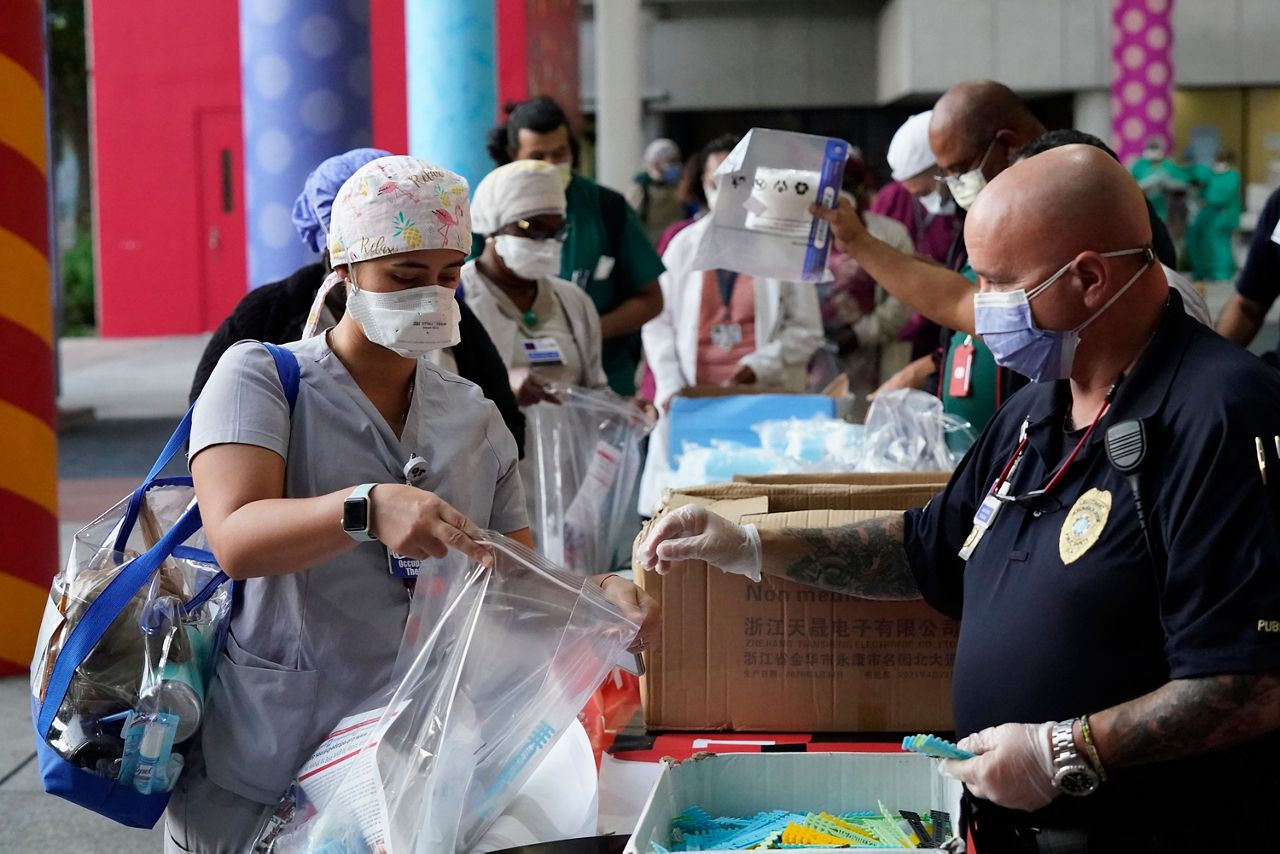 The need on the microlevel is mismatched with broader improvements in supply: more American manufacturers are online, hospitals can regularly purchase equipment in bulk and things like N95 masks are more widely available in stores.

But the broadening of the market has also made it less straightforward, and demand has driven prices up sometimes by more than 1,000%.

“The pandemic marketplace has been almost impossible to navigate for those little tiny clinics and others that don't have existing connections,” said Dr. Ali Raja, Executive Vice-Chair of Department of Emergency Medicine at Massachusetts General Hospital and a co-founder of Get Us PPE.

While cases of COVID-19 declined in the first few months of 2021, the need for PPE among staff at clinics and shelters never did. As cases begin to tick up once again, the disparity for those small providers still exists.

When Brian Wolin’s company was approved to sell N95s out of New Jersey last August, he expected to be inundated with orders because demand was so high.

Months later, in early March, Protective Health Gear was still making about 50,000 masks per day, even though the factory can make at least triple that number.

“We have the availability to make much more,” Wolin told Spectrum News, but he said they also need orders to pay for labor and other manufacturing costs. As of April 1, the company had begun producing 100,000 per day.

Often, small clinics and nonprofits aren’t sure where to look for PPE — or whether to trust it, considering the millions of counterfeit items circulating in recent months.

Companies selling masks and other equipment to the general public, such as PHG and Miami-based DemeTECH, have had trouble finding buyers. But they’re also barred from placing ads on sites like Facebook, partly a protective measure against scams.

One idea experts have floated is a central, federally-run marketplace where small health care facilities and consumers can go to shop for PPE and compare prices. 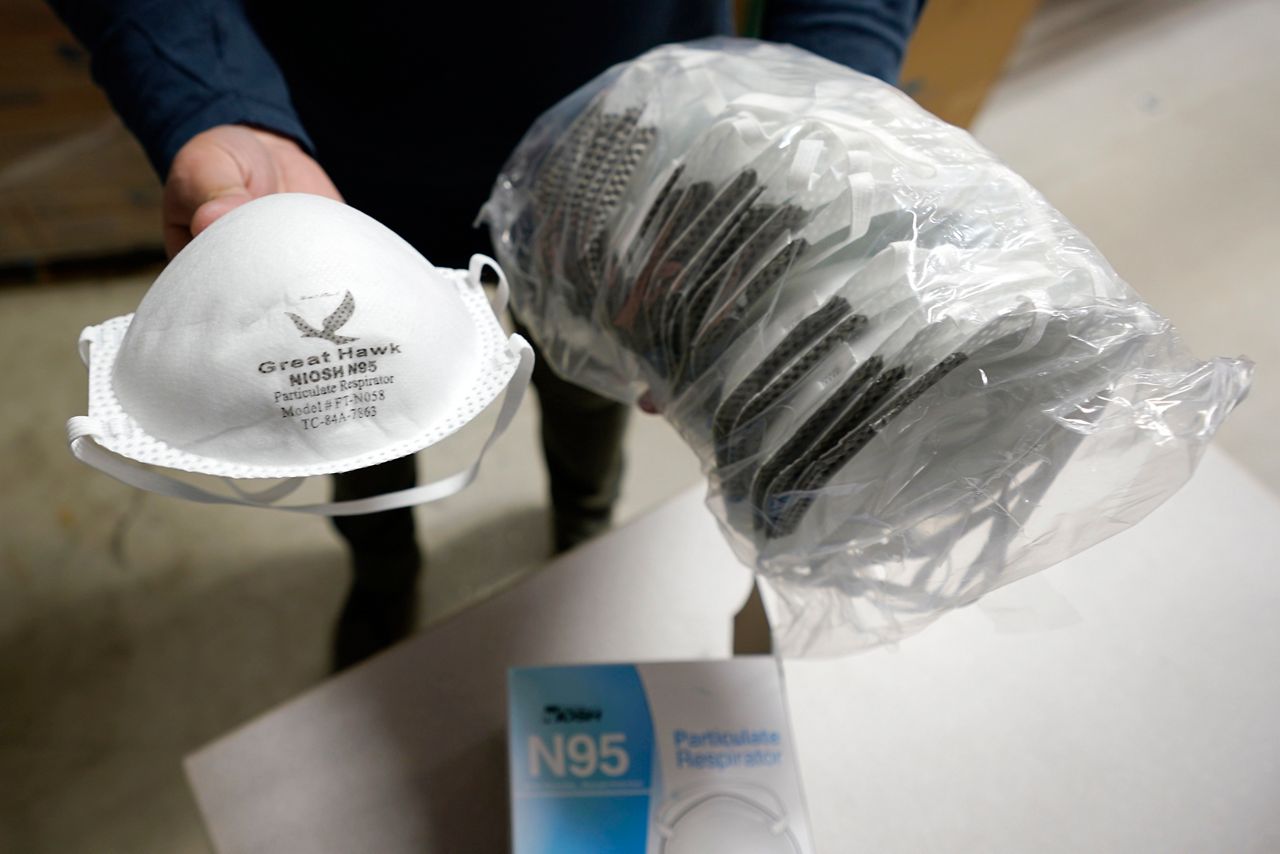 The Centers for Disease Control and Prevention (CDC) already lists approved suppliers of things like N95 respirators, for example, but they don’t list the cost or information about quantity, such as whether the company requires bulk orders.

“Ideally, list the supply that's available for each supplier, so that small facilities don't have to call around to all of [them],” Dr. Raja said.

There’s one marketplace up and running that was created by the nonprofit Project N95, which stepped in as a sort of clearinghouse amid pandemic shortages last year.

Project N95 buys in bulk from dozens of different manufacturers and then sells to regular consumers, clinics and other providers, charging a small operating fee.

“Basically, we stand in the middle of that transaction so that you don't have to worry,” said Anne Miller, Project N95’s executive director. “We can do a single box, we can do 10s of 1000s, we can do it either way.”

Miller said they’ve helped unload suppliers’ inventory and have fulfilled most orders they get, while trying to keep costs reasonable.

In February, Get Us PPE’s donation requests dropped for the first time since September, though they still get thousands of queries they can’t fulfill. Most people agree that supply has been a major boon to PPE access, but there’s only so much that small organizations can do to close the gap.

“If some government agency were to do this, it would have a much more profound effect,” Wolin said.

As of mid-March, the U.S. had more than 330 million N95 masks in the Strategic National Stockpile, 25 times the number in stock at the beginning of the pandemic, according to data shared with Spectrum News.

But the national supply is reserved for states, tribes and territories who request it on behalf of health departments, and it’s meant to address “emergency” needs, a spokesperson for the Department of Health and Human Services explained.

“It is important to note that HHS is taking care not to disrupt the commercial supply chain,” the spokesperson said. “HHS is prepared to deploy personal protective equipment … to temporarily fill in gaps left by the commercial market.”

That market has led to price increases and fluctuating costs, depending on where you look.

Pre-pandemic, an N95 mask cost about $.038, according to the Society for Healthcare Organization Procurement Professionals. Now, that ranges from $3-7 for smaller orders from manufacturers, anywhere from a 700%-1,700% increase.

Donations have also dried up since the beginning of the pandemic, when more people were sewing their own masks and giving up the PPE they had lying around at home.

Anne Miller at Project N95 said they’re able to keep prices lower because they buy in large quantities and act as a middle man, and they’re prepared if more orders start coming in. A box of 20 N95 respirators on their site, for example, will cost you $50 or $2.50 each.

The White House COVID-19 Response Team is also working on a plan to better connect distributors with small providers, a source familiar told Spectrum News, though they said a federal marketplace is not at the top of the list.

Early on, President Joe Biden authorized his team to use the Defense Production Act to boost supply of personal protective equipment, which they first did on Feb. 5 for surgical gloves, still one of the scarcest items on the market.

Since the U.S. has relied on overseas manufacturers for the gloves’ raw ingredients, the order called for building new American factories, with the goal of producing 1 billion gloves per month by the end of 2021.

But supply without guaranteed access doesn’t solve the PPE gap, which is still fresh in the minds of health care workers — even those who have equipment more readily available, like hospital staff. Several facilities are still reusing N95 masks, gowns and other PPE. 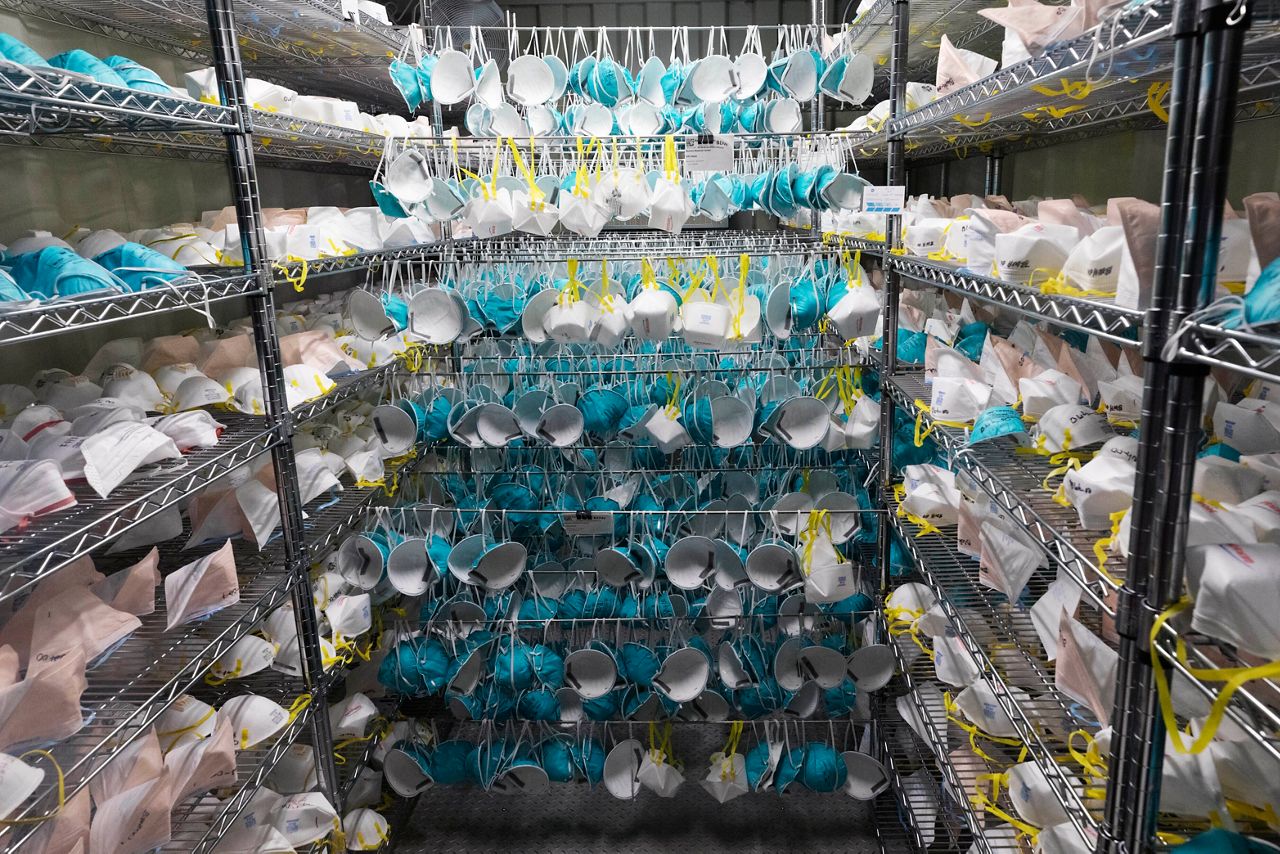 FILE - In this April 2020 file photo, used protective medical masks are prepared for disinfecting at a decontamination site in Somerville, Mass. Because of shortages in 2020, the Centers for Disease Control and Prevention has revised its guidance to allow health care workers to reuse protective equipment, contradicting manufacturers' guidance. (AP Photo/Michael Dwyer)

“We know that there's inventory, that domestic manufacturers have tens of millions of units, right?” Miller of Project N95 said, noting how some large facilities are still conservative with how many masks they buy and use. “I think there is an elephant in the room.”

Trahair said Joseph’s House recently got approved for a donation from Blue Cross Blue Shield, which will fill their PPE requests from one centralized stockpile for the next few months.

In the meantime, they have enough masks to stop reusing them, but Trahair said that doesn’t eclipse the feeling things could suddenly grow worse.

“That's a really difficult mindset shift for us, actually,” she said. “Everyone has a really poignant memory of having to keep your mask and having to make it last for as long as you could.”