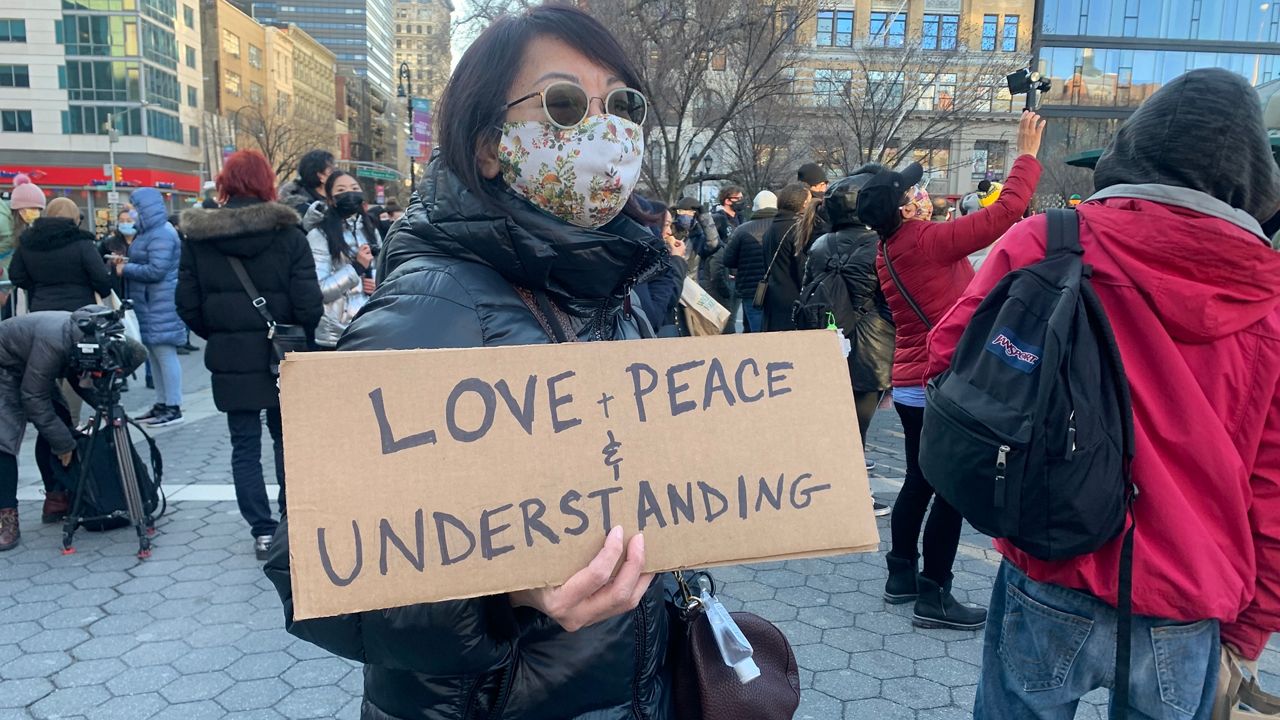 They were among the many New Yorkers who turned out for a peace vigil Friday in Union Square to honor the victims and denounce anti-Asian hate.

“It’s been invisible, it hasn’t mattered,” said Sah. “If it took this to matter, it’s time to come out.”

The Asian American Federation hosted the event, which a number of elected officials, including Sen. Chuck Schumer and City Comptroller Scott Stringer, attended. Mayor Bill de Blasio, who was heckled while on stage, was also there.

Organizers said the goal was to grieve as a community — a majority of the victims were of Asian descent.

“It took a really long time for us to even be acknowledged about what was happening, and it took the deaths of eight people — six of the women who look like me — for people to start realizing what we’ve been saying since last year,” said Jo-Ann Yoo, the Asian American Federation’s executive director.

Mourners said the shootings in Georgia point to much larger issues about racism and policing. The suspect has not been charged with a hate crime at this time, and he told authorities the attacks were not racially motivated.

“Blaming it on sex addiction is just really a lazy way of trying to sweep this under the rug and excusing someone,” said Astoria resident Lorenzo De Los Angeles, who attended the vigil.

Meantime, Sah and Luke say it’s great to see support like they saw Friday, but they emphasize it should not take a tragedy for Asian Americans to get the help they deserve.

“It’s about time, and it’s too late,” said Luke, a Park Slope resident. “But at the same time, we have to take advantage of this moment to make as much noise as possible, to get as much legislation passed as possible, and to change the behavior.”

Pamela Sah & her mother Mary Luke are devastated after Tuesday’s deadly spa shootings. They were among the many New Yorkers who turned out for a peace vigil in Union Square to honor the victims and denounce anti-Asian hate. @NY1 #StopAsianHate #StopAsianHateCrimes pic.twitter.com/OnkU84TFQS

The vigil comes as anti-Asian hate crimes are also up in the city. The mayor urged people to visit nyc.gov/stopasianhate