President Joe Biden held the first Rose Garden ceremony of his presidency on Friday, celebrating his signing of the $1.9 trillion American Rescue Plan on Thursday, which will bring much-needed relief to millions of Americans as soon as this weekend. 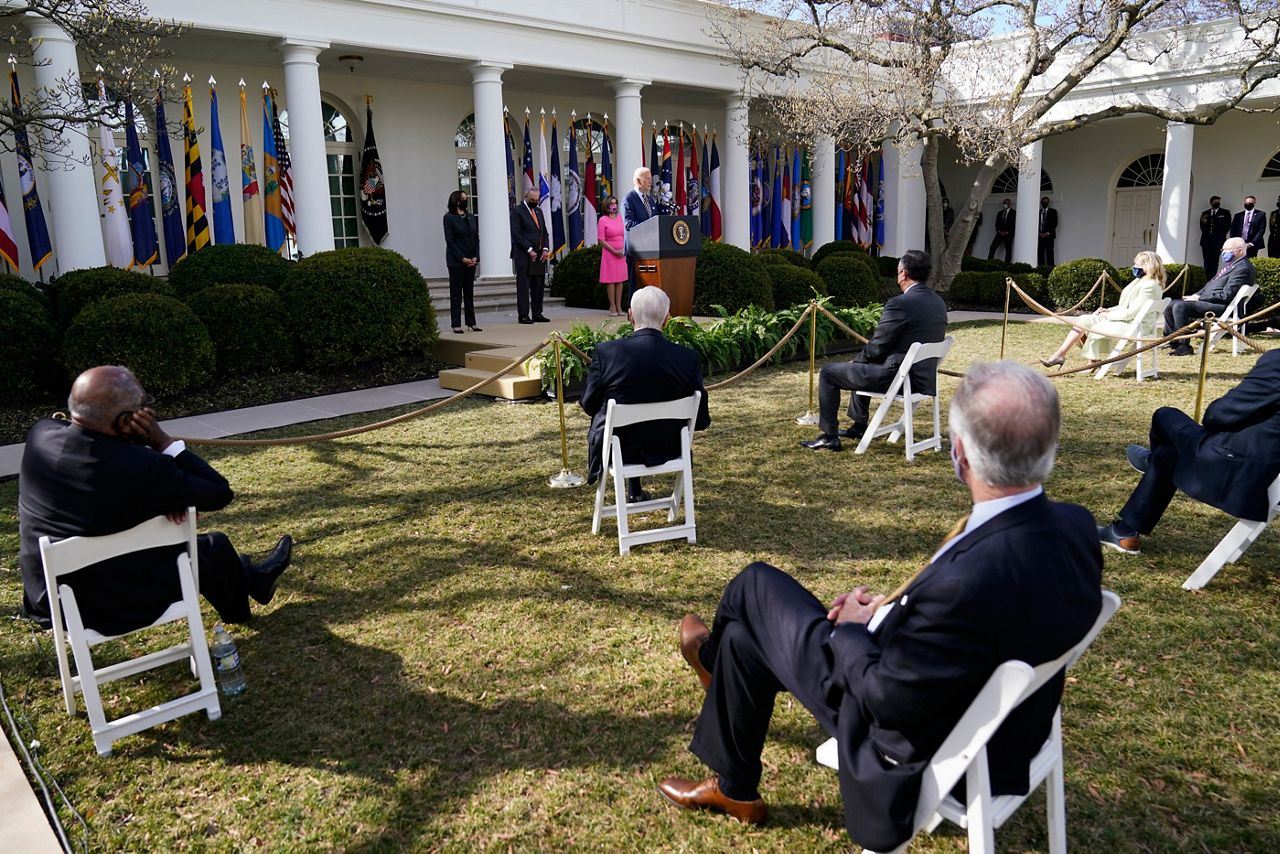 "This is a wonderful day for America," Majority Leader Schumer said. "This is the most significant piece of legislation, in so many ways, in decades."

"We Democrats made promises," Schumer added. "We made promises in Georgia. We made promises in the country. We said if we gained the Senate, kept the House, and elected the president, we would finally get things done and get us out of this COVID crisis. And we are on the road to success." 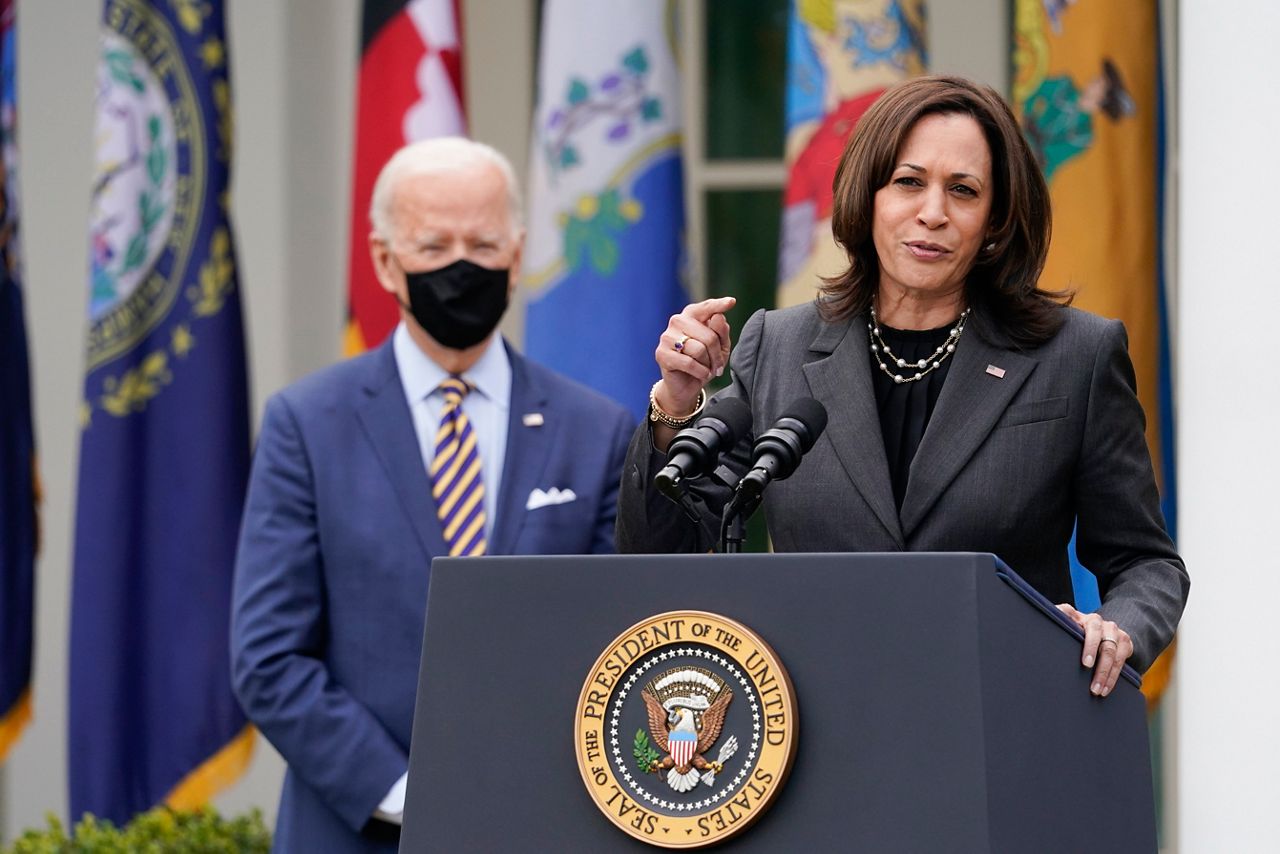 "The president promised help is on the way," Vice President Harris said. "And today, help has arrived."

"Joe Biden, Mr. President, you had a vision, you had a purpose, and you had faith that the American people, regardless of who they voted for, would support this plan simply because it would help," she said before introducing the president. 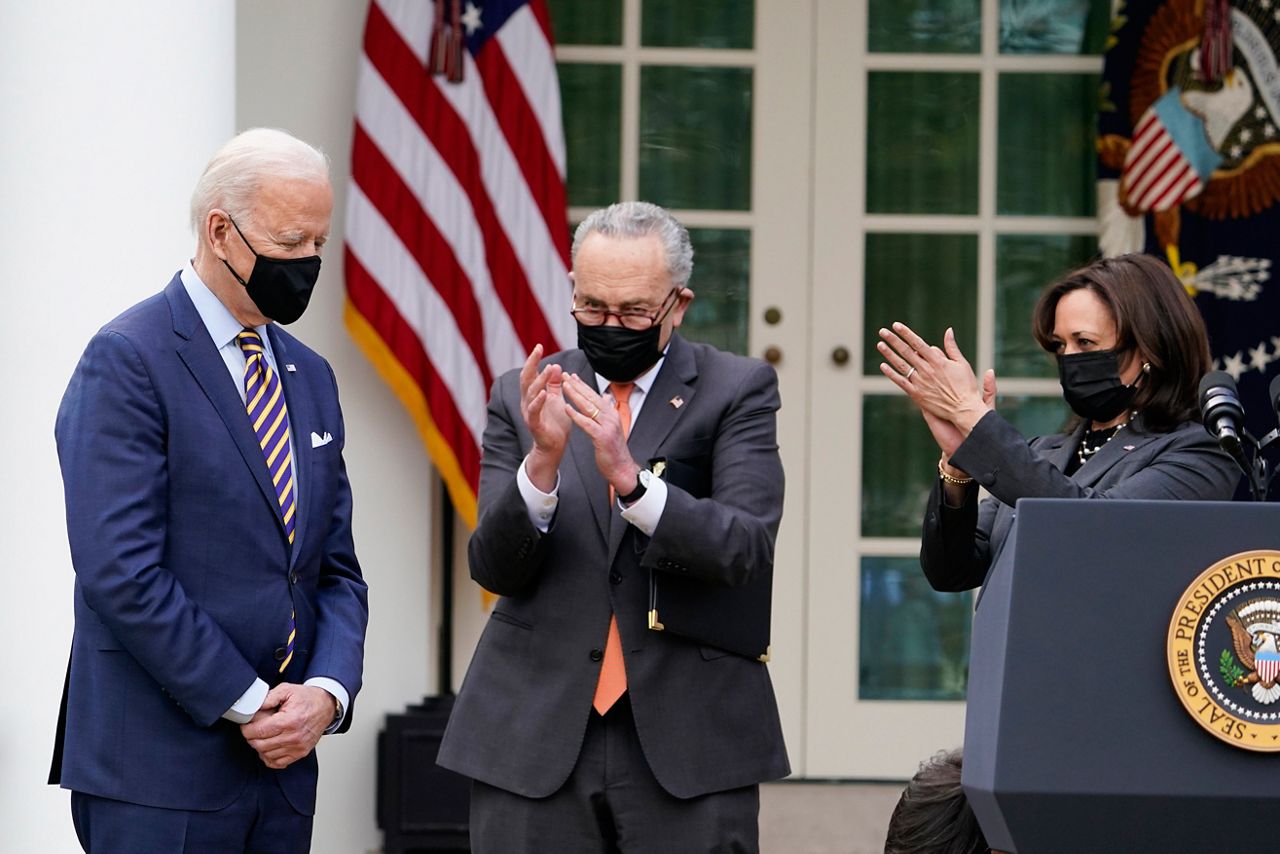 Biden said that the American Rescue Plan "changes the paradigm. For the first time in a long time, this bill puts working people in this nation first. It's not hyperbole. That's a fact."

No Republicans were in attendance during Friday's ceremony, as no members of the GOP supported the bill. White House Press Secretary Jen Psaki previously said that the event "would not be bipartisan." 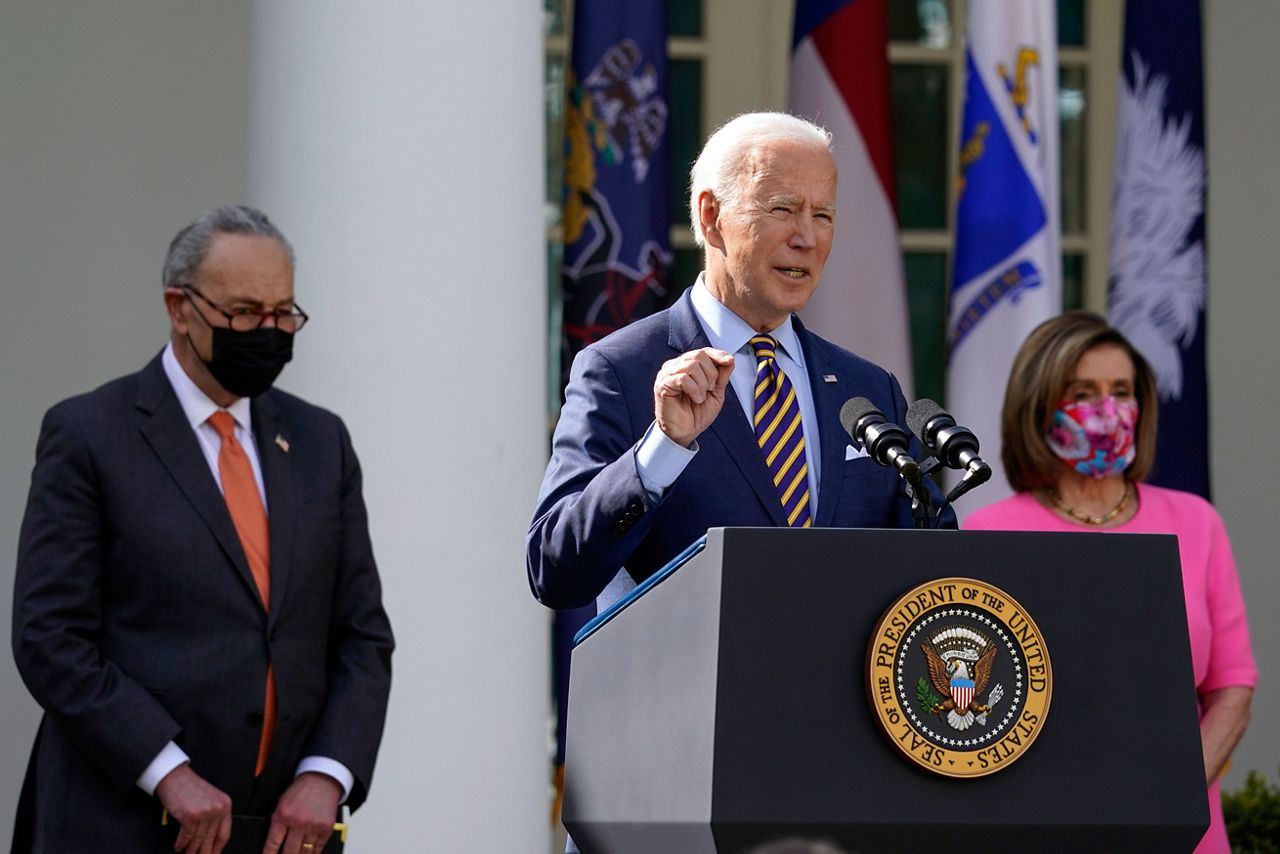 "This historic legislation is about rebuilding the backbone of this country," Biden said before signing the bill Thursday, "and giving people in this nation, working people, middle class folks, the people that built the country a fighting chance. That's what the essence of it is."

The House approved the Senate's version of the COVID-19 relief bill Wednesday without a single vote of Republican support in either chamber, the final hurdle to get the bill passed.

"In the weeks that this bill has been discussed and debated, it's clear that an overwhelming percentage of the American people – Democrats, independents, our Republican friends – have made it clear, the people out there, made it clear they strongly support the American Rescue Plan," Biden said Thursday. "Yesterday with the final passage of the plan in the House of Representatives, their voices were heard and reflected with everything we have in this bill."

"I'm going to have a lot more to say about that tonight and the next couple of days," the president previewed, referring to his address to the nation Thursday night to mark the pandemic shutdown anniversary, where he honored the lives lost to the pandemic and outlined the next steps forward, including announcing all eligible adults will be able to get vaccination appointments by May 1.

Next week, the president will travel to Pennsylvania and Georgia to highlight the American Rescue Plan in a trip billed as the "Help is Here" tour. Vice President Harris and Second Gentleman Doug Emhoff will also make stops in Las Vegas and Denver, and the First Lady will visit New Jersey.

The $1,400 stimulus checks included in the bill will start hitting bank accounts "as early as this weekend," Press Secretary Jen Psaki said at a press briefing Thursday.

Earlier Thursday, the White House posted a new web page dedicated to the American Rescue Plan, meant to show Americans how the legislation might help them.

Hot off the presses: It's the new American Rescue Plan site!

You can learn how the bill will help families like yours, find out how the checks will be distributed, and tell us how the President's plan will help you. https://t.co/kPVtUApvCf

The final House vote on the measure was 220-211, without a single Republican supporting the bill in either chamber of Congress. Psaki specified Thursday that the signing ceremony at the White House Friday will not be bipartisan.

Rep. Jared Golden of Maine was the only Democrat to vote against the measure. Golden was one of two Democrats to vote no on the American rescue Plan the first time it passed the House.

”While the Senate made modest changes to the legislation, some of those changes undermined parts of the bill I do support, and others were insufficient to address my concerns with the overall size and scope of the bill," Rep. Golden said in a statement, adding that his vote "should not be construed as an unwillingness to support my constituents and the economy through this pandemic."

Rep. Kurt Schrader (D-OR), the other Democrat to vote against the bill the first time around, voted in favor of the measure on Wednesday.

The bill passed through the Senate on Saturday in a 50-49 vote – along party lines – after voting through the night on a mountain of amendments.

The bill will provide $1,400 direct stimulus checks to most Americans and an extension of federal unemployment benefits, as well as funding for states and local governments, and money for COVID-19 vaccines and testing. 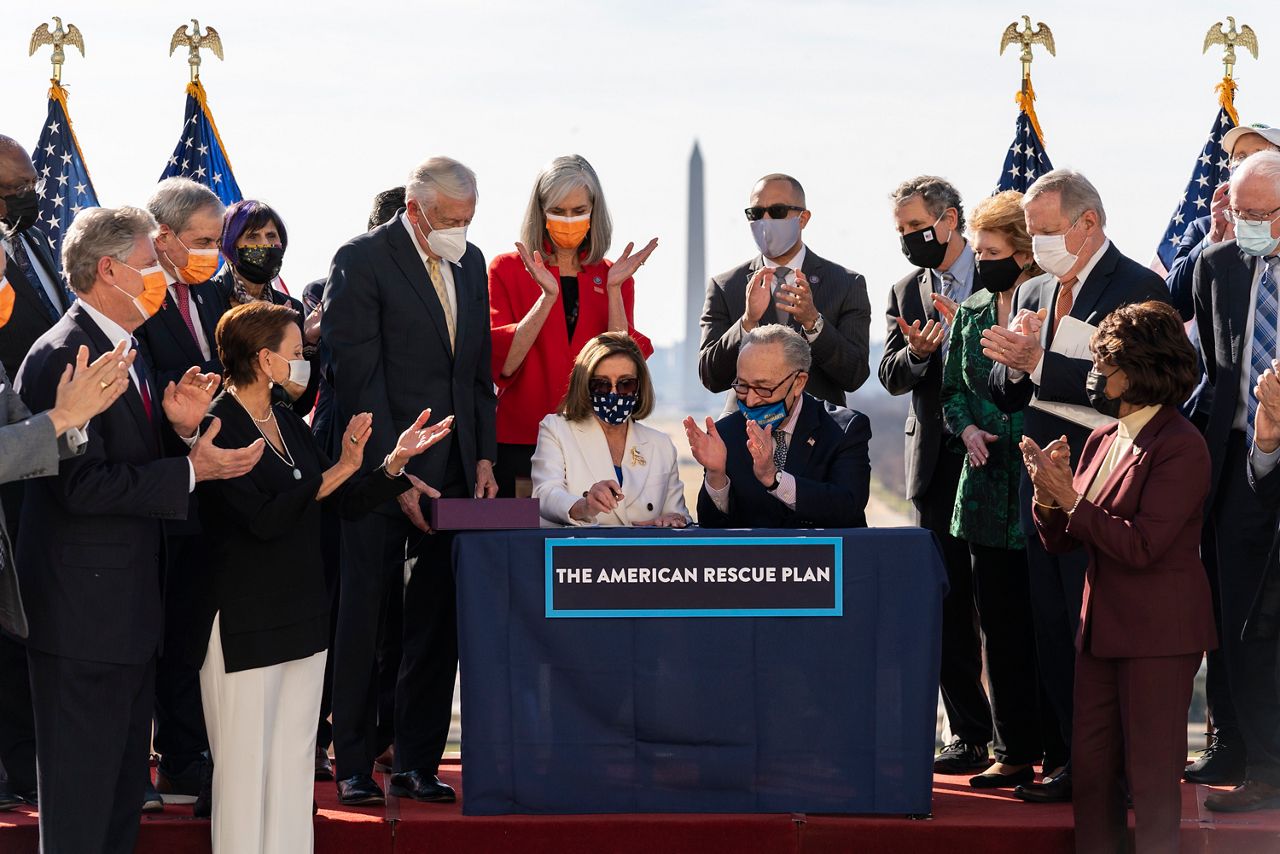 At an enrollment ceremony following the vote to officially send the bill to the White House, Speaker Pelosi, who President Biden called "the finest and most capable speaker in the history of our nation" in his statement, said Wednesday is "a momentous day in the history of our country, because we have passed historic, consequential, and transformative legislation."

"This is the most consequential legislation that many of us will ever be a party to," Pelosi continued. "Who knows what the future may bring, but nonetheless on this day we celebrate because we are honoring a promise made by our President and as we join with him in promising that help is on the way."

"President Biden's vision and his determination were so apparent to the American people and the reason why this legislation enjoys this support of 75% of the American people in a strong bipartisan way across the country," she said. "We thank him for his leadership and also for his contribution to the substance of the legislation as well as his signature when that comes."

Majority Leader Schumer's message was simple: "Help is on the way."

"This is a wonderful day for America," Schumer added. "This is one of the most consequential pieces of legislation we have passed in decades, and you know what we can show America, that we can get things done to make their lives better, and we will continue to do that through the rest of this session. Help is on the way."

President Biden will tour the country to detail the plan to the American people directly. Biden will head to Delaware County, Pennsylvania, on Tuesday, near Philadelphia, and Vice President Kamala Harris and Second Gentleman Doug Emhoff will travel to Las Vegas, Nevada, on Monday – another swing state key to Biden's win in November – then Colorado on Tuesday.

Biden was critical of his former boss, President Barack Obama, for not doing more to highlight his accomplishments in the 2009 economic recovery efforts, which may have cost Democrats in the 2010 midterms, in which the party suffered major losses.

"Barack was so modest, he didn’t want to take, as he said, a 'victory lap,'" Biden said last week of Obama. "I kept saying, ‘Tell people what we did.’ He said, ‘We don’t have time. I’m not going to take a victory lap.' And we paid a price for it, ironically, for that humility."

Psaki said Monday that Treasury Secretary Yellen was “laser” focused on making sure the $1,400 checks included in the bill will get out “as quickly as possible.”

When President Trump signed the last relief bill in December, the $600 checks in the package began rolling out two days later, and most were sent to Americans over the following two weeks.

White House Covid-19 senior adviser Andy Slavitt told MSNBC that the bill brings a "sigh of relief" to the country.

"When this gets to the President's desk and it is signed, it is really going to be monumental in terms of allowing Americans to breathe a big sigh of relief," Slavitt said. "Not that Covid-19 is over, but we will now have the resources to support Americans through the next stages."

It's not just White House officials and Congress celebrating the news – American Airlines told its "13,000 colleagues who received Worker Adjustment and Retraining Notification (WARN) notices last month, those are happily canceled – you can tear them up" in a letter from Chairman and CEO Doug Parker and President Robert Isom.

"Congress has saved thousands of airline jobs, preserved the livelihoods of our hard-working team members and helped position the industry to play a central role in the nation’s recovery from COVID-19," the company said in a statement.

Democrats and President Biden have also touted the bill as a revolutionary measure to combatting poverty in America. A study from the nonpartisan Urban Institute and Brookings Institution Tax Policy Center found that the poorest 20% of Americans would receive a 20% income increase.

The bill will also cut child poverty in half, according to the president, by expanding a child tax credit program to more families and increasing the tax credit. Families with children would receive, on average, a tax cut of over $6,000, according to the study.

"The Biden American Rescue Plan is about the children," Speaker Pelosi said before the vote. "How do you say no to lifting 50% of improvised children in America out of poverty?"

Sen. Bernie Sanders (I-VT), a leading progressive voice in the Democratic caucus and the Senate Budget Chairman, called the bill “the most significant piece of legislation to benefit working people in the modern history of this country.”

According to a recent Pew Research survey, 70% of Americans support the package, including 41% of Republicans. The bill has immense backing from Democrats and those who lean Democratic, with 94% support.

Congress aimed to get the bill to President Biden’s desk ahead of a March 14 deadline when federal unemployment benefits were set to expire. Those benefits will be extended through Sept. 6 at payments of $300 per week – on top of state benefits – with tax breaks on top of the payments.

During the debate period in the Senate last week, the compromise between Democrats over unemployment benefits threatened to derail the deal, but were resolved before the vote passed. The House’s original version of the relief bill provided $400 in weekly benefits through August.

Democratic leaders and the White House also agreed to restrict eligibility for the $1,400 stimulus checks, phasing out payments for people with higher-incomes after pushback for more "targeted" spending.