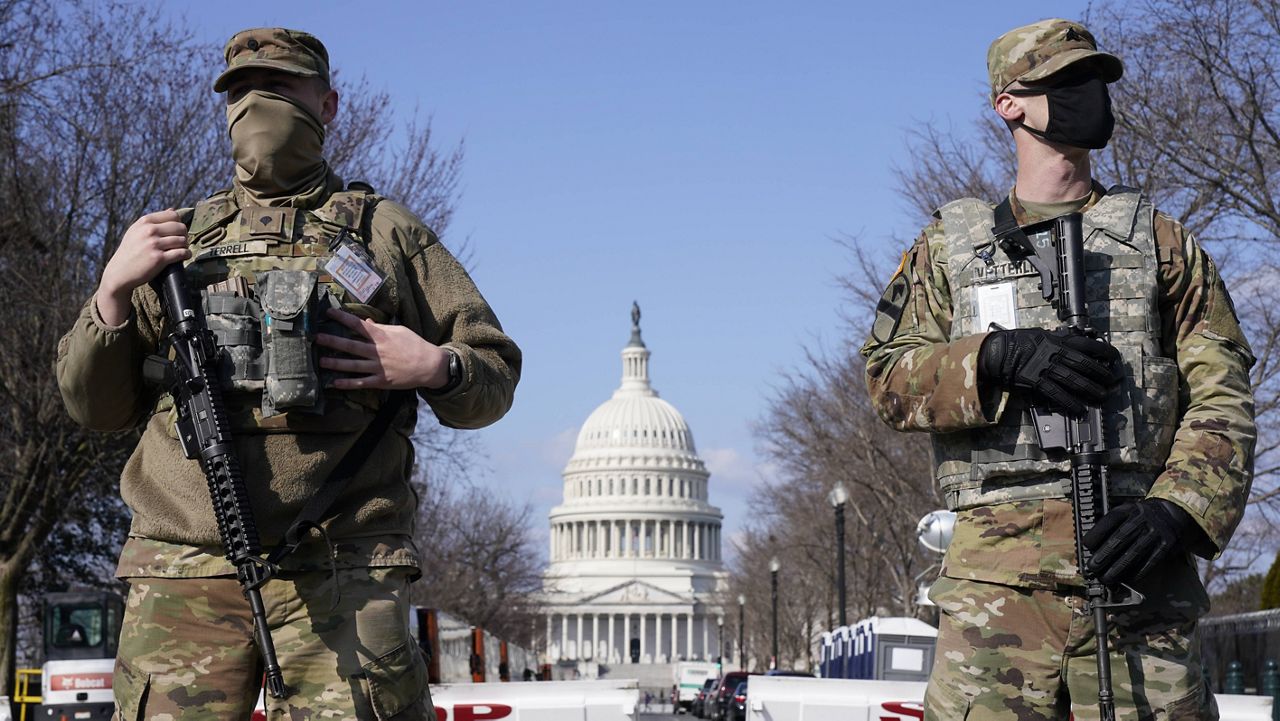 WASHINGTON — Law enforcement agencies are on high alert Thursday after intelligence officials warned of a possible plot by a militia group to invade the Capitol.

A statement from U.S. Capitol Police on Wednesday said the department is "aware of and prepared for any potential threats towards members of Congress or towards the Capitol complex. We have obtained intelligence that shows a possible plot to breach the Capitol by an identified militia group on Thursday, March 4."

March 4 is the date that coincides with a far-right conspiracy theory claiming that former President Donald Trump will be put back into office.

The House’s acting sergeant-at-arms also issued a bulletin that informed members of Congress about the increased security presence and that his office, along with Capitol Police, is monitoring online chatter about potential unrest related to the March 4 date.

"As a precaution, and to support the safety and security of Members and staff, the USCP will have additional personnel posted throughout Capitol Grounds," Blodgett said. "Additionally, the National Guard continues to maintain a presence on Capitol grounds to support the USCP with maintaining an increased security posture."

Lots of National Guard around the Capitol today.

I’ve been set up just outside the senate and have seen far more police officers and guardsman than lawmakers, their staff, or press today. pic.twitter.com/Fasht9db4S

The House of Representatives moved planned votes on the George Floyd Justice in Policing Act from Thursday to Wednesday amid the threat and increased security. The Senate is still scheduled to convene to begin debating President Joe Biden's COVID-19 relief package.

Capitol Police declined to provide any other information about the threat "due to the sensitive nature of this information."

"We have already made significant security upgrades to include establishing a physical structure and increasing manpower to ensure the protection of Congress, the public and our police officers,” the department said. "Our Department is working with our local, state, and federal partners to stop any threats to the Capitol. We are taking the intelligence seriously."

March 4 was the original presidential inauguration day until 1933, when it was moved to Jan. 20. A far-right conspiracy theory, mainly promoted by supporters of QAnon, predicted that Trump will rise again to power that day.

Alex Kaplan, who covers online misinformation for Media Matters for America, a media watchdog organization, tweeted that most QAnon influencers have now disavowed the March 4 prediction and claim that any disturbances that might occur will be “false flag” operations.

In an interview with CNN on Wednesday, Rep. Michael McCaul (R-TX) called on Trump to do his part to prevent any further unrest caused by his supporters.

"I think President Trump has a responsibility to tell them to stand down,” McCaul said. “This threat is credible. it's real.’

Capitol Police did not identify the militia group in its statement on Wednesday. In her testimony to the House panel, acting Capitol Police Chief Yogananda Pittman said her investigators had collected “some concerning intelligence,” but declined to provide any details publicly, saying it was “law enforcement sensitive” and that she would provide a private briefing for the subcommittee members.

Pentagon press secretary John F. Kirby was asked about the continued presence of National Guard troops around the Capitol, who are expected to remain in place until March 12.

Kirby told reporters that the mission of the Guard troops still on Capitol Hill is different than it was on the day of the insurrection, saying they are now acting as a “supporting element to existing security that's being provided” on the grounds.

“I am not aware of any additional requests (for troops) that have come through official channels here at the Pentagon,” Kirby added.

So far, about 300 people have been charged with federal crimes for their roles in the riot. Five people, including a Capitol Police officer, died.

Thousands of social media accounts that promoted the Jan. 6 event that led to a violent storming of the U.S. Capitol have since been suspended by major tech companies such as Facebook and Twitter, making it far more difficult for QAnon and far-right groups to organize a repeat of the mass gathering on Thursday.

Twitter banned more than 70,000 accounts after the riots, while Facebook and Instagram removed posts mentioning “stop the steal,” a pro-Trump rallying cry used to mobilize his supporters in January. And the conservative social media platform Parler, which many of Trump’s supporters joined to promote false election fraud conspiracy theories and encourage friends to “storm” the Capitol on Jan. 6, was booted off the internet following the siege. It, however, has since returned.

Since his defeat, Trump has been promoting lies that the election was stolen from him through mass voter fraud, even though such claims have been rejected by judges, Republican state officials and Trump’s own administration. He was impeached by the House after the Jan. 6 riot on a charge of incitement of insurrection but was acquitted by the Senate.