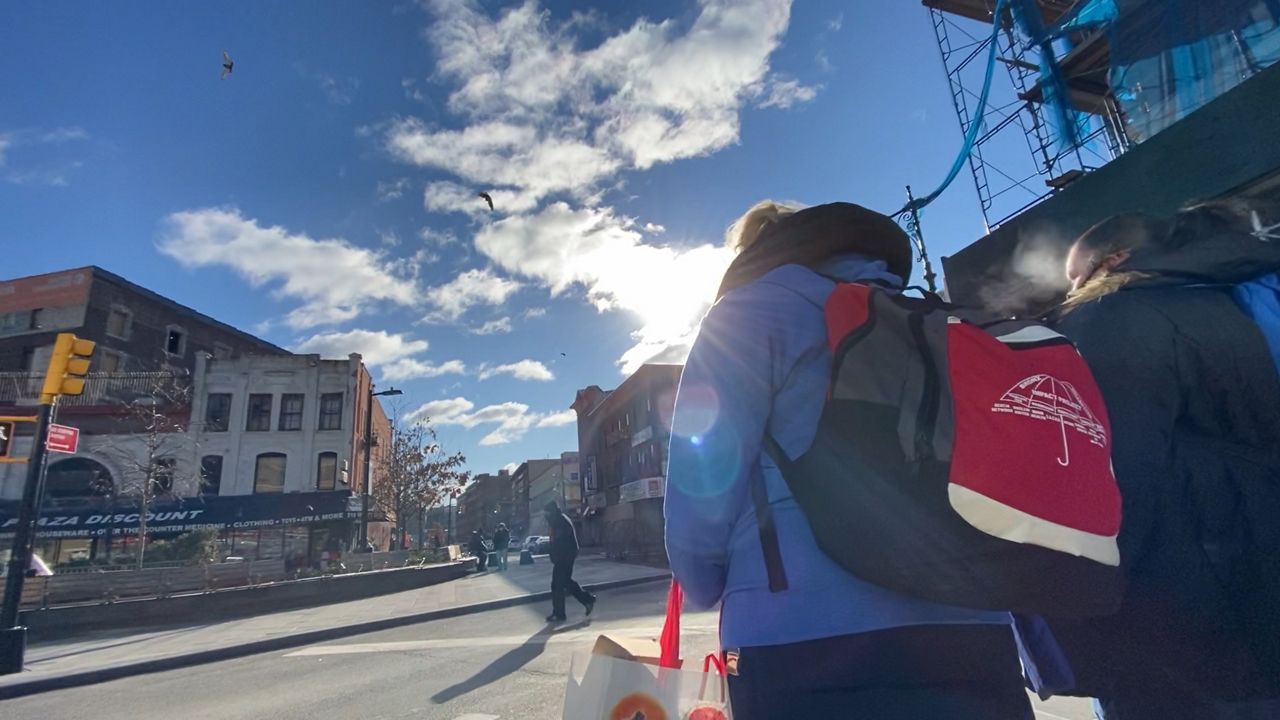 Where COVID-19 and the Opioid Crisis Merge

THE BRONX — It doesn’t matter if there’s rain, snow, sleet or shine—Rachel Arana is out walking the streets in the South Bronx three times a week.

She’s part of the Bronx Opioid Collective Impact Project, an outreach team that canvases some of the areas hardest hit by the opioid epidemic. They give out clean needles, find and properly dispose of used ones, pass out free food, and administer Narcan training, a treatment that can be used in cases of narcotic overdose.

“This is what I do most of Mondays, Thursdays and Fridays,” said Arana as she walked towards the Hub, a major intersection in the South Bronx. “This is where we service people the most.”

The opioid epidemic that has ravaged communities all over the country has had an outsize impact on New York. Even before the COVID-19 crisis, opioid overdose deaths increased 200% between 2010 and 2017, according to state data. And in New York City, overdose deaths rose in the first quarter of 2020, according to the Department of Health. From January through March, there were 440 overdose deaths, 41 more deaths than the same period in 2019.

The Department of Health has not yet issued overdose numbers after that time period.

“There's a lot more in the streets now because they have really nowhere to go,” said Arana. “That's why we see more syringes. You see more homeless people now. The pandemic changed a lot with them.”

The Bronx has consistently been one of 16 counties in the state with the highest rate of opioid abuse and overdose deaths, according to the State Health Department Opioid Annual Report. It’s also the borough hardest hit by coronavirus, with the most cases, hospitalizations and deaths.

The outreach team said it is intervening in more overdose incidents and have seen an increase in substance use in public spaces since it started this work in 2018.

“It’s no secret that poverty has been an issue that the Bronx has dealt with for generations,” said Dr. David Collymore, chief medical officer at the Acacia Network, the umbrella organization that oversees the outreach team. “And with that comes epidemics of substance use disorder and there's also the folks that are distributing and selling drugs. They look to come into communities because they know there's a large number of individuals to continue to abuse and mistreat.”

This work has taken on new urgency, as shelters and rehabilitation services have had to change the way they work in order to adhere to social distancing guidelines.

“You don’t leave nobody out in the cold,” Arana said, while pushing a cart of supplies towards a new encampment of people living in tents near Lincoln Medical Center.

The work they do requires a high level of trust with the people they serve. That’s why it’s important that the people see themselves reflected in the outreach team.

“Don't you want this?” Arana asked in Spanish of a man, who seemed hesitant at first, as she held out a bag of clean syringes.

As the team began running out of supplies that morning, Arana started thinking of what else she could do for the people at the last location they’d visit.

“[I’m going to give] my personals to who I see over here, which, what I got on, I’m gonna hand it out, because I can’t leave no one with nothing,” she said.

The outreach team is a regular presence in the neighborhood and, at times, is approached about things outside the scope of their work.

One agitated man approached the team to complain about people in his building not adhering to social distancing requirements.

There wasn’t much they could do, but Dr. Collymore stayed behind to listen to the man as the others kept moving along.

“The communities we serve are very near and dear to my heart,” said Dr. Collymore. “I was born in the South Bronx, raised in South Jamaica, Queens so I’m working at home in essence.”

Not only are most of the team from the neighborhood, but many of them are considered “peer outreach workers,” meaning they share a history of addiction.

While there have been challenges, Rachel Arana’s been sober for much of the last 12 years.

She started using at a young age and eventually found herself living on the streets.

“I had to try to live every day,” she said. “I panhandled. I collected bottles. I do what I have to do to maintain my use of heroin.”

It was when she was introduced to a needle exchange program that her outlook on life changed.

“I seen them coming out, you know, on the bad days, good days,” she said. “They would come in to help or they would, you know, they'd bring us back to their office. I felt like I wasn't getting stigmatized. I was not getting looked down at. I felt welcomed.”

That’s when she knew she wanted to get sober and help others feel that way as well.

“As long as I’m safe, and I know I am safe, I am going to continue to serve my community,” she said. “They need the help because of everything shut down, there's not much out there for them to go to.”