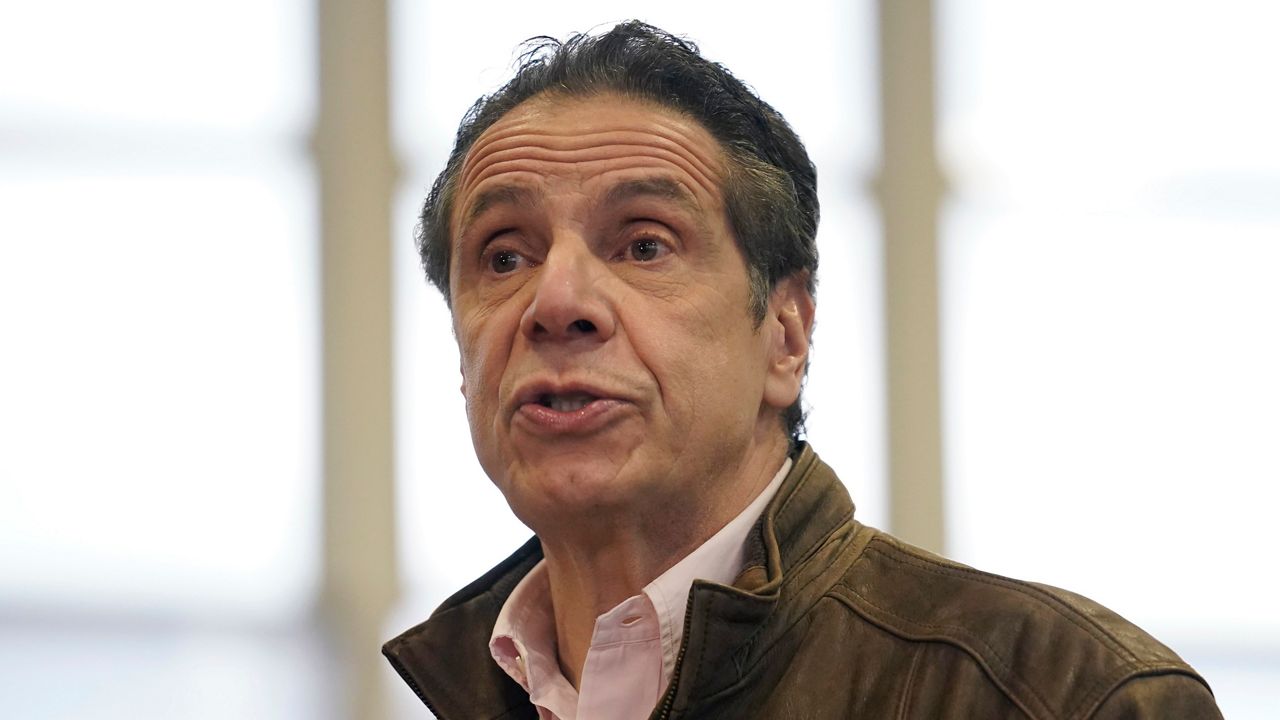 A February 22, 2021, photo of Gov. Andrew Cuomo speaking during a news conference at a COVID-19 vaccination site in Brooklyn. AP Photo/Seth Wenig, Pool.

NEW YORK — In a detailed essay, a former aide to Gov. Andrew Cuomo is accusing him of sexual harassment, saying he forcibly kissed her in his Midtown office.

Lindsey Boylan, who worked for the state’s economic development agency and later directly for the governor, says she was subjected to a hostile work environment — culminating with an unwanted kiss in 2018.

Boylan, who is running for Manhattan Borough President, had alleged last December that Cuomo had harassed her but provided no details and refused to speak to the media about her claim.

In a blog post published Wednesday, Boylan details instances of alleged harassment along with a timetable for when they occurred. She also shows an e-mail from a woman in Cuomo’s office who seems to be encouraging the alleged behavior.

Boylan begins her essay by alleging that Cuomo during a 2017 flight from Western New York suggested they play strip poker.

Boylan also said Cuomo invited her for a one-on-one tour of his Albany office, which made her uncomfortable.

Then, in 2018 at his Manhattan office, Boylan says Cuomo kissed her on the lips without permission. Boylan left the administration later that year.

The statement went on to quote four former Cuomo administration officials who said that the incident on the plane never happened. They then proceeded to provide flight logs, which only confirms Boylan’s claims that she was on the plane the day she alleges Cuomo made his comment about strip poker.

The statement did not specifically address the alleged forced kiss.

Erica Vladimer is the founder of the Sexual Harassment Working Group in Albany, which includes survivors of harassment and assault. She is pushing back against the Cuomo team’s response.

“It seems like he was focusing on a really specific piece of what’s as an incredibly emotional, powerful and traumatic recount that Lindsey shared with world, essentially. And to me it shows that they are grasping at straws,” Vladimer said.

"Clearly, there is no place for this type of behavior in the workplace or anywhere else," Stewart-Cousins said in a statement.

A state senator and former special assistant to the counsel to the governor is supporting Boylan's claims that were posted on the blogging site Medium.

In a set of tweets, State Sen. Alessandra Biaggi said she has no doubt the allegations are true. She said she witnessed similar behavior from Cuomo.

Biaggi elaborated when she appeared on Inside City Hall on Wednesday night, where she claimed other people have stories of toxic or abusive behavior in the governor's administration.

State Sen. @Biaggi4NY — who said she believes a former aide’s allegations that Gov. Cuomo sexually harassed her — told @InsideCityHall other people have stories of toxic or abusive behavior in the governor's administration. #NY1Politics pic.twitter.com/qJG5k5AEAm

When asked if Cuomo was inappropriate with her, she had this to say:

"Well, I think you'd have to define what inappropriate is. Again, I've spoken out in different capacities about just some of the behavior that I found to be inappropriate in his office. And we can talk about that another time. But I think tonight what I would really love to get to is, what are the different options to investigating and what can the legislature do as it relates to some of the allegations that Lindsey Boylan has put forward."

Biaggi said she believes an investigation by the state attorney general could present a potential conflict of interest, and that another route should be taken to investigate.

Cuomo Senior Advisor Rich Azzopardi responded, saying: “Alessandra Biaggi has chronically misrepresented her role during her brief time in the governor’s office. The governor did not interact with her when she worked there – further, the majority of the senior staff never knew who she was or that she worked in the office until she left and ran for office.”

At a news conference last year, Cuomo responded to Boylan’s less-specific allegations at the time: “Look, I fought for and I believe a woman has the right to come forward and express her opinion and express issues and concerns that she has. But it’s just not true.”

Boylan has not responded to comment further on Wednesday.