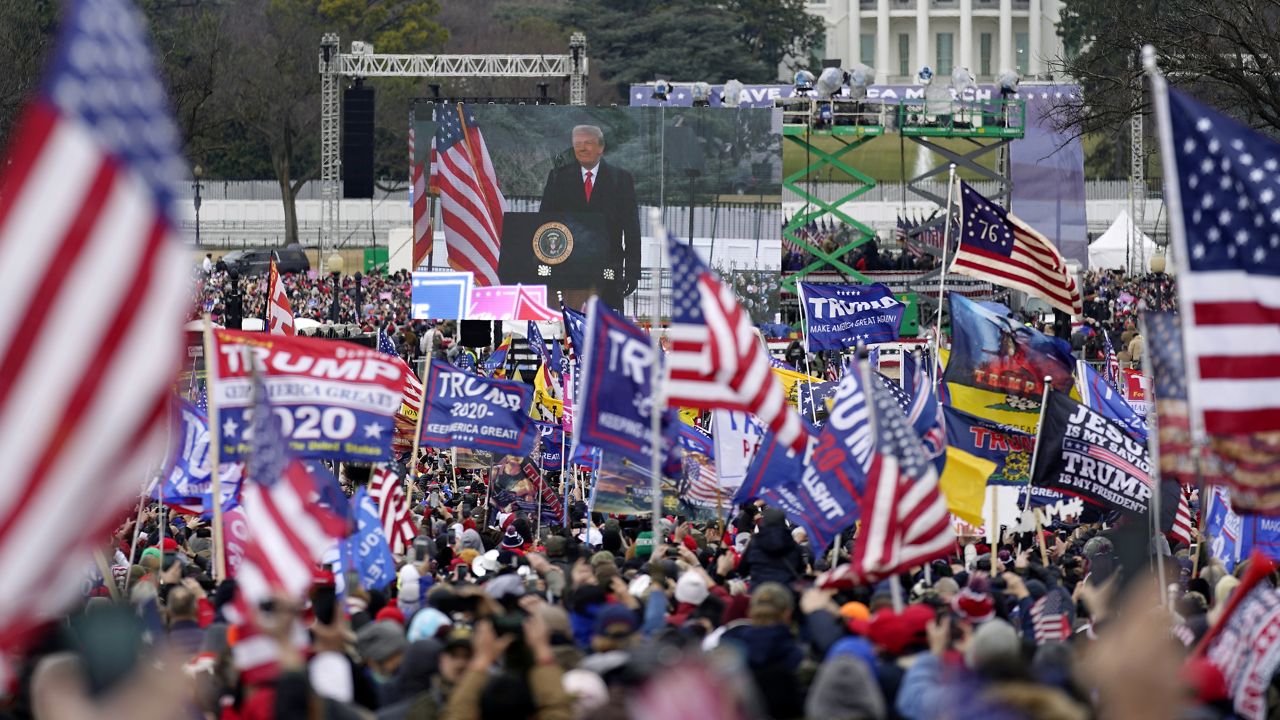 FILE - In this Jan. 6, 2021, file photo with the White House in the background, President Donald Trump supporters listen as he speaks during a rally in Washington. (AP Photo/Julio Cortez, File)

With a vote of 57-43, former president Donald J. Trump was acquitted on the charge of "incitement of insurrection" at his historic second impeachment trial.

House impeachment managers attempted to make the case that then-President Trump caused the deadly riot at the U.S. Capitol on Jan. 6 by espousing falsehoods about voter fraud for months, including the baseless claim that the election was stolen from him, and then telling his supporters gathered near the White House at a rally that morning to "fight like hell" to overturn his defeat.

Five people died when they then laid siege to the Capitol.

In a blistering rebuke after the vote, Senate Majority Leader Chuck Schumer (D-NY) said that this vote "was about choosing country over Donald Trump, and 43 Republicans members chose Trump."

"They chose Trump. And it should be a weight on their conscience," Schumer said, adding: "Look at what Republicans have chosen to forgive."

Schumer also praised the vote as "the largest and most bipartisan vote in any impeachment trial in history."

Schumer called the day of the riot the "final, terrible legacy" of Trump and said the stain of his actions will never be "washed away."

Senate Minority Leader Mitch McConnell (R-KY), speaking on the floor of the Senate, condemned Trump's actions, but said that ultimately the Senate does not have the power to convict a former president.

McConnell slammed the former president, saying that there is "no question that President Trump is practically and morally responsible for provoking the events of the day" and called his actions "disgraceful derilication of duty," but called impeachment a "narrow tool."

"If President Trump were still in office, I would've carefully considered whether House managers proved their specific charge," McConnell said, adding: "This is a close question, no doubt. Donald Trump was the president when the House voted. But not when the House chose to send the papers."

McConnell said that while Trump is not subject to impeachment, he can be prosecuted or sued for the events of Jan. 6.

"The Senate today did not condone anything that happened on, or before that day," McConnell added. "We simply put our constitutional duty first."

"If President Trump were still in office, I would've carefully considered whether House managers proved their specific charge," McConnell said, adding: "This is a close question, no doubt. Donald Trump was the president when the House voted. But not when the House chose to send the papers."

In a statement issued after the acquittal, the former president said that "this has been yet another phase of the greatest witch hunt in the history of our Country. No president has ever gone through anything like it."

"Our historic, patriotic and beautiful movement to Make America Great Again has only just begun," Trump added, teasing: "In the months ahead I have much to share with you, and I look forward to continuing our incredible journey together to achieve American greatness for all of our people."

Seven Republican Senators joined all 50 Senate Democrats in voting guilty, but they fell 10 votes short of the threshold for conviction:

Though Trump was acquitted, it was easily the largest number of senators to ever vote to find a president of their own party guilty of an impeachment charge.

Some of the Republicans who voted against Trump issued statements after the vote.

"Our Constitution and our country is more important than any one person," Sen. Bill Cassidy (R-LA) said. "I voted to convict President Trump because he is guilty."

Sen. Richard Burr of North Carolina, one of the more surprising guilty votes of the day, laid the blame at Trump's feet for the deadly Jan. 6 riot at the U.S. Capitol.

"The President bears responsibility for these tragic events. The evidence is compelling that President Trump is guilty of inciting an insurrection," Burr said, "and that the charge rises to the level of high Crimes and Misdemeanors. Therefore, I have voted to convict."

"The facts are clear," Burr said. "The President promoted unfounded conspiracy theories to cast doubt on the integrity of a free and fair election because he did not like the results. As Congress met to certify the election results, the President directed his supporters to go to the Capitol to disrupt the lawful proceedings required by the Constitution. When the crowd became violent, the President used his office to first inflame the situation instead of immediately calling for an end to the assault."

Sen. Ben Sasse of Nebraska said that he "cannot go back on my word, and Congress cannot lower our standards on such a grave matter, simply because it is politically convenient. I must vote to convict."

Pennsylvania Sen. Pat Toomey issued a statement saying Trump's "behavior after the election betrayed the confidence millions of us placed in him. His betrayal of the Constitution and his oath of office required conviction."

Toomey called Trump's actions "a lawless attempt to retain power by a president was one of the founders’ greatest fears motivating the inclusion of the impeachment authorities in the U.S. Constitution."

On the other hand, Republican Sen. John Thune (R-SD) said that he voted to acquit Trump because of a "jurisdictional issue" in trying a private citizen no longer in office.

“What former President Trump did to undermine faith in our election system and disrupt the peaceful transfer of power is inexcusable," Thune said. “But he is no longer president."

"It’s an uncomfortable vote and time will tell," Thune said when asked by CNN how history will regard his vote. "I don’t think there was a good outcome for anybody."

The nearly weeklong trial has delivered a grim and graphic narrative of the riot and its consequences in ways that senators, most of whom fled for their own safety that day, acknowledge they are still coming to grips with.

House prosecutors argued that Trump was the "inciter in chief," stoking a months-long campaign of sewing misinformation and doubt in the election, and orchestrated pattern of violent rhetoric and false claims they called the "big lie" that unleashed the mob. Five people were killed in the deadly insurrection, including a rioter who was shot and a police officer.

Trump’s lawyers countered that Trump’s words were not intended to incite the violence and that impeachment is nothing but a "witch hunt" designed to prevent him from serving in office again.

The trial had been momentarily thrown into confusion when senators suddenly wanted to consider potential witnesses, an hours-long standoff Saturday that stalled the momentum toward a vote. Prolonged proceedings would be politically risky, particularly for Biden’s new presidency and his emerging legislative agenda. Coming amid the searing COVID-19 crisis, the Biden White House is trying to rush pandemic relief through Congress.

The senators, announcing their votes from their desks, were not only jurors but also witnesses. Only by watching the graphic videos — rioters calling out menacingly for House Speaker Nancy Pelosi and then-Vice President Mike Pence, who was presiding over the January certification tally — did senators say they began to understand just how perilously close the country came to chaos.

Many senators kept their votes closely held until the final moments on Saturday, particularly the Republicans representing states where the former president remains popular. Most of them ultimately voted to acquit, doubting whether Trump was fully responsible or if impeachment is the appropriate response.

"Mr. Trump is innocent of the charges against him," he said. "The act of incitement never happened."

The House impeached trump on the sole charge of incitement of insurrection one week after the riot, the most bipartisan vote of a presidential impeachment.

The delay Saturday came as senators wanted to hear evidence about Trump’s actions during the riot.

Fresh stories overnight focused on Rep. Jaime Herrera Beutler (R-WA), who said in a statement late Friday that Trump rebuffed a plea from House Republican leader Kevin McCarthy to call off the rioters.

Fifty-five senators voted for to consider witnesses, including Susan Collins of Maine, Lisa Murkowski of Alaska, Ben Sasse of Nebraska and Mitt Romney of Utah. Once they did, Lindsey Graham of South Carolina changed his vote to join them on the 55-45 vote.

But facing a prolonged trial with defense poised to call many more witnesses, the situation was resolved when Herrera Beutler’s statement on the call was read aloud into the record for senators to consider as evidence. As part of the deal, Democrats dropped their planned deposition and Republicans abandoned their threat to call their own witnesses.

Impeachment trials are rare, senators meeting as the court of impeachment over a president only four times in the nation’s history, for Andrew Johnson, Bill Clinton and now twice for Trump, the only one to be twice impeached.

Unlike last year’s impeachment trial of Trump in the Ukraine affair, a complicated charge of corruption and obstruction over his attempts to have the foreign ally dig up dirt on then-campaign rival Biden, this one brought an emotional punch displayed in graphic videos of the siege that laid bare the unexpected vulnerability of the democratic system.

At the same time, this year’s trial carried similar warnings from the prosecutors pleading with senators that Trump must be held accountable because he has shown repeatedly he has no bounds. Left unchecked, he will further test the norms of civic behavior, even now that he is out of office still commanding loyal supporters.

"This trial in the final analysis is not about Donald Trump," said lead impeachment manager Rep. Jamie Raskin (D-MD) "This trial is about who we are."