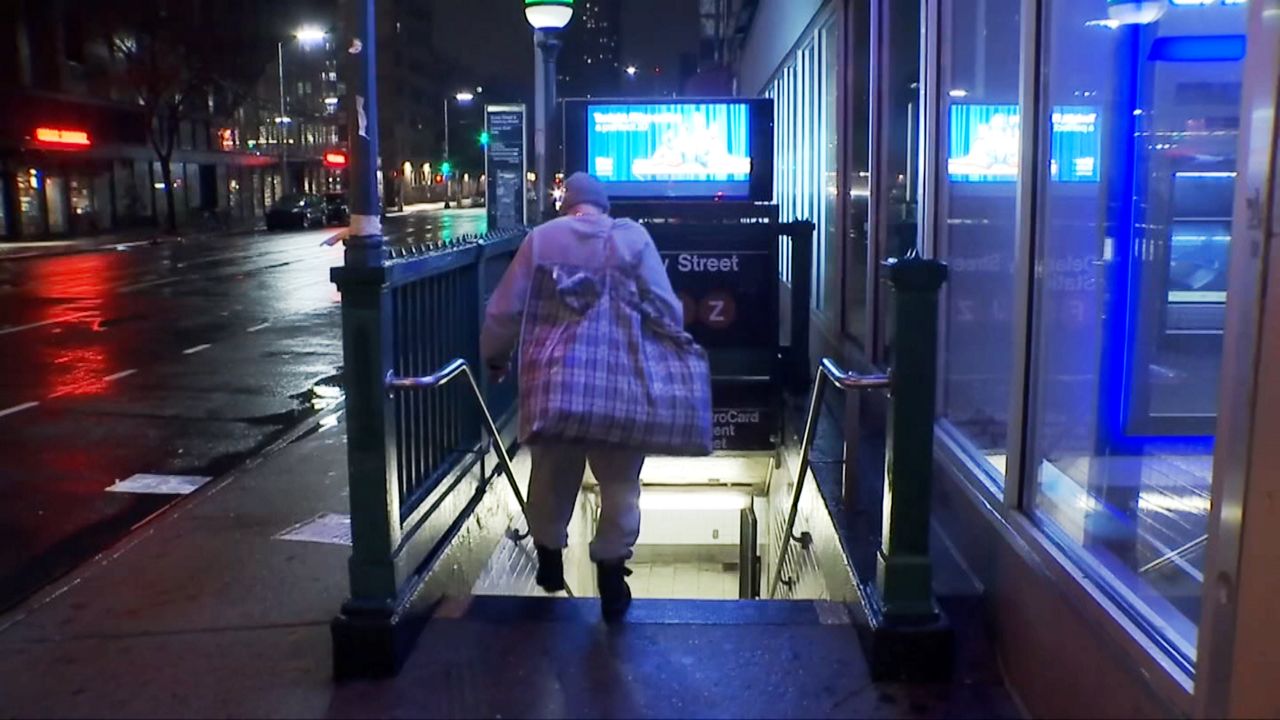 Christoph Meier knows what it is like to be homeless in New York. It is one reason why he assembles care packages of socks and snacks to hand out to homeless people at night.

"I know when I was out there, this is what I would want," he said while putting together his care packages.

He is homeless himself after his work installing carpets dried up in the pandemic. For now, he's living at a Holiday Inn on the Lower East Side.

On this night, he distributes the care packages inside the Delancey Street-Essex Street station.

Temperatures are in the low 30s - a Code Blue night when anyone seeking shelter in the system cannot be denied.

"They usually go to the subway and find a corner to sit, to stay covered from the wind and rain stuff like that," Meier said.

Last January, the city estimated that 1,670 people were living in the subway. But since May, the MTA has closed the system every night from 1 a.m. to 5 a.m. because of the pandemic to clean the stations and trains. That makes this the first winter that homeless New Yorkers are blocked from seeking refuge here.

"They go and they stay in some dumpsters that they got blankets and stuff all inside the dumpsters, but they can close it, and it shields them, and they get up in the morning, it shields them from the wind and the cold and the rain," Meier said.

Others head deeper into the system, entering tunnels and desolate corners of stations.

Since May, more than 6,182 individuals have accepted referrals to shelter services. As of Monday, 747 of them were still sheltered.

"For the smaller subset of people that are given the option to come inside to a stabilization bed, typically, a hotel room, that they are coming inside at a much greater rate and they're staying inside," said Giselle Routhier, policy director with the Coalition for the Homeless.

One man who was blocked from walking into the station after it closed asked Meier to call 911, earning him a trip to the hospital, providing an escape from the cold.

"He doesn't even have a jacket," Meier said. "So what people like that do is, they go to the hospital, they say they got chest pains, so that because it's a hospital, they have to take them, and that's what they do so they have a place for the night."

Still, there is no full accounting of where all of the homeless people who usually stay in the subway are spending their nights, now that the system is off limits. But advocates believe that once the subway fully reopens, many will return to this shelter of last resort.